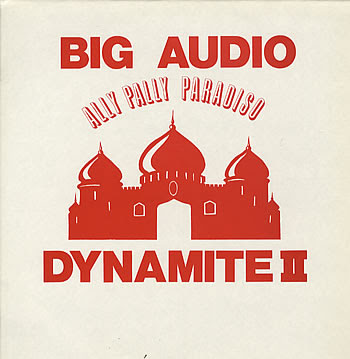 Wow . . . I didn't know this one was so rare. I've had this disc for forever; I picked it up in early 1992 at either Phantasmagoria Records or Vinyl Ink Records, two legendary Washington, DC-area music stores that sadly are no longer with us. From what I've read, this album was a promo, attached to a limited edition version of Big Audio Dynamite II's 1991 album The Globe, or available through mail order from NME magazine. The place I bought it from had it out separately for sale from the main album. I recall acquiring it in the run-up to the band's scheduled 1992 concert in DC as part of their international Globe tour.

The group was slated to play the Citadel Center, which back in the day was a great place for Washington-area concerts. It was located on Kalorama Road in the heart of the Adams Morgan neighborhood of the city, and from what I understood was a former roller skating rink. As such, the place was a cavernous barn; a huge room with a stage at one end and no seats - just standing-room only. But it was simply an outstanding venue for seeing bands . . . although you took your life in your hands if you stood too close to the stage - not due to flailing mosh pit idiots or aggressive bouncers, but because of the constant crush of people behind you surging forward. I saw The Pixies there (with Pere Ubu opening) in November 1991 with my sister, and being huge Pixies fans, we wanted to be right up front for the show. Well, I spent the entirety of The Pixies' set with her in front of me, while I held my arms locked rigidly on either side of her against the stage barrier, trying to keep both of us from being squashed. It was a great show, mind you, but my arms were so sore afterwards that I couldn't lift them to drive; my sister had to take the wheel to get us home.

Despite the drawbacks of this concert hall, I saw a lot of bands there. When I heard that BAD II was going to be at the Citadel Center over the summer, I was completely jazzed. I'd been a fan of Big Audio Dynamite from the get-go; I regard the original band lineup (featuring The Clash's Mick Jones on guitar and vocals, the vocals and found sound additions of Don Letts, Dan Donovan on keyboards, Leo Williams on bass, and drummer Greg Roberts) as the best, 'classic' lineup. 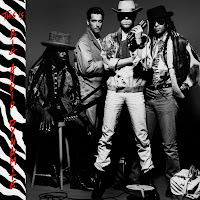 When Mick Jones & Co.'s first album (This Is Big Audio Dynamite) was released in 1985, I acquired it practically the moment it came out. In subsequent years, I purchased and enjoyed the follow-up albums by the original band as they appeared - No. 10 Upping St. in '86, Tighten Up Vol. '88 (in . . . well, guess what year), Megatop Phoenix in '89 - but I could tell by the end of the decade that there was a definite lack of spark and originality remaining within Big Audio Dynamite. If there was, it certainly wasn't making it onto the albums. So there was disappointment in some quarters, but I don't think anyone (including me) was really surprised when the original BAD lineup dissolved in 1990.

When I heard that Mick Jones was putting together a brand new lineup and planning to record/tour under the name "Big Audio Dynamite", I must admit that I was more than a bit concerned. To me, it sounded as though Jones was making the same mistake that Joe Strummer made back in the mid-eighties, when in the wake of Jones' acrimonious departure from The Clash, Strummer gathered up a group of nobodies and recorded the embarrassing, widely-panned and vilified Cut The Crap under the 'Clash' moniker. I figured Jones would have learned his lesson after witnessing that debacle - but apparently not. 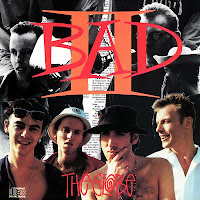 When The Globe was released in the summer of 1991, I forced myself not to pay attention to it - I just didn't want to be disappointed. But songs from the album began appearing in heavy rotation on some of my favorite radio stations, including DC's WHFS, and to my happy surprise I discovered that the replacement band (now dubbed "Big Audio Dynamite II") had risen to the challenge, and had actually put out a pretty good record. The new guys brought an infusion of energy and new ideas, which was basically what the group needed. I greatly enjoyed songs like "Rush" and "Green Grass", and looked forward to their upcoming show.


But alas, to my intense dissatisfaction, the show was cancelled at the last minute, for reasons that were unclear to me at the time. From what I heard later, the homeowners who lived near the Citadel Center were up in arms about having a concert venue all but on top of their houses, and were ticked off about dealing with the noise, rowdy crowds and incidental property damage that occurred during show nights. So eventually, the city shut the place down. In recent years, the location has been converted into a Harris-Teeter supermarket. Too bad - for a while there, the Citadel Center was THE place to see a show in DC.

The songs on this live album were recorded at two European shows Big Audio Dynamite II played in 1990, at the Alexandria Palace in London and at the Paradiso in Amsterdam, Holland (hence the name, Ally Pally Paradiso). On this album, some of the live song names were changed from the names of the original songs on the BAD albums; when necessary, I've noted the 'real' names below:

I think that this album catches much of the energy, excitement and sound of a live BAD concert in the early '90s. Listening to it now, you can also hear a huge dollop of the then-current rave/Madchester sound contained in what BAD II was doing back then. But in my mind, it doesn't really date the album all that much. As a standalone disc, I think that it holds up pretty well, and as part of the overall Big Audio Dynamite I/II oeuvre, it's not essential . . . but neither is it a frivolous or unnecessary album to own.

Anyway, you decide. For your listening pleasure, here's the only live album ever put out by any iteration of Big Audio Dynamite, Ally Pally Paradiso, released in 1991 on Columbia Records (then a subsidiary of CBS). Enjoy, and let me know what you think: