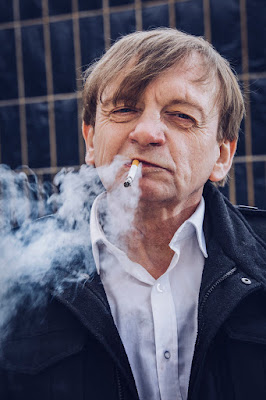 Well, it was exactly one year ago today that Mark E. Smith died, done in by lung and kidney cancer. Since then, it's been an odd year for me (and many others, I'm sure) in that regard; the first one in memory that wasn't graced by a new Fall release.

As affecting as MES's death has been to me over the past year, what I'm finding equally distressing is the gradual silence which seems to be falling over Fall-world. Yes, there are still diehards who frequent The Fall Forum, posting on band-related topics and the like. But from my vantage point, the number and quality of posts there has declined significantly since the initial flood of comments, tributes and the like that came immediately after Smith died. And The Fall Online blog, a formerly "must-see" site that for many years I used to visit at least weekly, is also slowly and gradually falling quiet. There have been only two posts in the "Fall News" section since last September... I suppose with the band kaput and the leader no more, there wouldn't be much "band news" to report, per se. Still, it's weird to see how quickly that once go-to source has become moribund.

Somewhat related to that: in the wake of Smith's death last January, I figured that, as in the case of other rock legends who pass on, the "floodgates" (as it were) would soon be opened, and longtime fans would have been blessed with a plethora of heretofore unreleased Fall product - rare outtake and demo collections, multi-disc compilations, album re-releases and the like stored away in the vaults, pulled together from the prolific band's long career. I was all but rubbing my hands together in anticipation; it all might not have been of the greatest quality, but I reckoned at the very least these archive releases would have kept the name and legend of The Fall alive for many more years. But for the most part, this hasn't happened... which I find sort of strange. Other than a few live sets (a couple from the 1990s released by Cog Sinister, consisting of some dodgy FLAC-only files of various shows in Sheffield) and a three-disc set of "golden greats" out on Cherry Red, there's really been nothing noteworthy put out. It's as if the world is already forgetting about the honorable Mr. Smith, and deeming the volume and quality of material he and his band produced over the past four decades is inconsequential and unworthy of continued acknowledgement.

Therefore, it's up to us, true Fall fans, to keep Mark's name and legacy alive. And to that end, here's a little something for my fellow Fall travelers - a bootleg recording

of the very last concert by the band, which took place in the Queen Margaret student union at the University of Glasgow, Scotland, only two months before Smith's death. A very obviously ill MES performed seated at center stage for the entire show... but he DID perform, so all props and respect to him for that. The Telegraph (UK) newspaper published a superb review of the gig the day after the show - the story's opening paragraph was prophetic, and therefore now haunting:


Hunched in a wheelchair, right arm in a sling, face bloated and bearded, Mark E Smith sang-spat a repeated phrase – “I think it’s over now, I think it’s ending” – as his sidemen locked into a brutal riff. This sounded valedictory, and a question hovered in the air: could we be witnessing the last days of The Fall, a band that for 40 years has belched like a dirty chimney through the drab skies of British culture?

Sucks to be right sometimes... Anyway, I got this recording from my friend and fellow blogger Jon Der - and subsequently I bestow it unto you all as well.

Here it is, The Fall's final show, recorded on the evening of November 4th, 2017. Enjoy, and spare a moment today to remember the late, great Mark E. Smith, the original Rock Curmudgeon, and all of the outstanding music he and the various incarnations of his band The Fall left behind. He, and they, remain my all-time favorite artist(s), and probably will so for the rest of my life.

And as always, let me know what you think.

Labels: 2017, Alternative, Bootleg, England, Manchester, Mark E. Smith, The Fall
Newer Posts Older Posts Home
Subscribe to: Posts (Atom)
Saying "Thanks" for the music you receive from here costs you absolutely nothing, and yet is worth quite a bit to me… If you can't bother leaving a comment on this blog for the first album/set we send you, don't bother making a request For a second album…