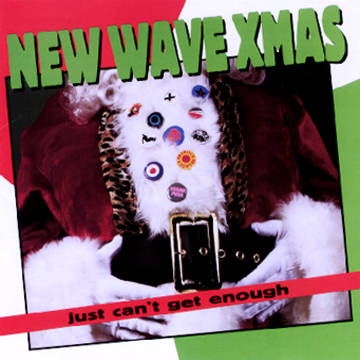 Another one from the great multi-album Just Can't Get Enough New Wave compilation series put out by Rhino Records in the mid-1990s (I posted New Wave Halloween here a couple of years ago).  This is one of the final entries from that run, a holiday-themed set featuring some real modern classics.  They sort of stretch both the concept of "New Wave" and the specific period covered (ostensibly the Eighties) with this album, which includes a couple of songs from both the 1970s and 1990s, along with "Little Drummer Boy/Peace On Earth", sung by those two post-punk giants Bing Crosby and David Bowie (heh) . . .  But despite this uncharacteristic drift of Rhino's focus, all in all, it's still an enjoyable disc.

Personal favorites include "Thanks For Christmas" by XTC (disguised here as "The Three Wise Men"), "Santa's Beard" by They Might Be Giants, and one of the greatest holiday-themed songs of the past thirty years, The Pogues' "Fairytale of New York".  Pretty much everything on this album is a winner, or at the very least will make you smile with the various bands' off-kilter thoughts on Christmas.

I meant to post way more Christmas stuff this year . . . but I just got distracted.  Plus, I'm nursing a recent sports injury that's kept me from spending extended periods in front of the computer.  A thousand pardons, please.  I hope that this entry somewhat makes up for my dearth of holiday posts - although I'm well aware that putting out Christmas music on Christmas Eve is a little like trying to sell pumpkins on November 1st . . .  But no matter - at least it will be here for next year!

So, for your holiday pleasure, here's Just Can't Get Enough: New Wave Xmas, released by the good people at Rhino Records on October 15, 1996.  Enjoy, and as always, let me know what you think.  And Happy Holidays to you all!