Poll Results - "Which artists are most worthy of 2018 Rock & Roll Hall of Fame induction?

I did a post on this subject almost six years ago, related to the then-incoming 2012 group of Rock Hall of Fame inductees. I figured that since the latest honorees for the upcoming year will be selected imminently, now was a good time to run this poll once again.

My previous RRHOF poll was focused on groups that had up to that point never received serious consideration for induction, with the intention of "proving" how worthy these artists were of this honor, in the hopes that the selection committee would eventually see the error of its ways. But frankly, in the years that have passed, that "due consideration" for singers/bands that may have fallen through the cracks hasn't materialized. My record on this hasn't been good. Since 2012, Hall & Oates, Stevie Ray Vaughan, ELO and Yes are the only bands from my 2012 list that have subsequently been inducted. I still think that it's a crime that Los Lobos, Roxy Music and Todd Rundgren haven't so much as been considered for enshrinement... but I stand by my original assessment; in terms of quality and volume of output and related critical acclaim, these artists more than possess the bonafides to be legitimate RRHOF inductees.

For this latest poll, I figured I'd just use the announced list of artists under consideration, and let you all choose from it.  Here are the results of your selections:

To determine a objective 'solution' to such a highly subjective question as this, I once again turned to John Sellers' 2007 book Perfect From Now On: How Indie Rock Saved My Life. As I wrote back in 2012:


For me, the best part of the book came in the back, with a series of appendices added by the author. And in one of them, I believed that I found the solution to my problem. In this section. Sellers conducts a mock debate with himself, over the relative 'coolness' of one particular band over another. To resolve this question, he actually comes up with an obsessively detailed equation, involving many factors and variables, that measures "exactly how much your favorite band rocks". These variables include the quality of an artist's entire oeuvre, their 'image', and an "X" factor, with the music quality factor accounting for the majority (2/3rds) of the overall score.

Now, admittedly, a lot of the variables that Sellers comes up with are silly and/or tongue-in-cheek ("If the band members have costumes, -10 points, unless that band is Kiss, in which case, +75"; "Every lyric equal to or better than 'Her love’s a pony'?"). But the section regarding music quality was pretty straightforward. So, for lack of a better alternative, I decided to use this formula . . .

Once again utilizing album critiques/evaluations and band information found on the Web to fill out the equation, I came up with the following scores/rankings:

If you care to review it, the full scoring/evaluation spreadsheet I created is here.


- The most important consideration driving this band quality formula, the factor that raised scores the most, is that the band/artist had to have put out a high percentage (of their overall output) of critically-acclaimed studio albums over an extended period of time. For example, Los Lobos has released a total of fourteen albums in their 36-year history; two-thirds of them are considered 'good' or better, with five ranked as 'brilliant'. On the other hand, all four of The Smiths' studio albums were acclaimed, with 3 considered 'brilliant' . . . but The Smiths were only together for four years total. In this equation, longevity counts.

So, my interpretation of the above scores is as follows:

By this (mostly) objective analysis of artist output, I predict that Depeche Mode, J. Geils, Radiohead, Kate Bush and Nine Simone are all but certain to get Hall of Fame nods this year, with The Cars and Link Wray also having an excellent chance of being selected, based upon the number of bands the committee is willing to let in all at once this year.  On the other hand, The Meters, MC5 and Bon Jovi have next to NO chance, as their output can in no way be considered RRHOF caliber.

Those are my predictions, and I'm standing by them!

Wellsir... it appears that I was somewhat 'off' in my predictions... I guess it goes without saying that "objectivity" and "subjectivity" are two different things. My analysis above was a dispassionate assessment of each artist's "worthiness" for Rock Hall induction, based upon the scope and quality of their work as determined by independent consensus.

However, here's who actually made it in this year:

Performer Category:
Award for Early Influence:
[Well, I DID call Nina Simone... and I kinda called The Cars. So I guess I got one and a half (out of five)...]

Overall, I'm not completely enthused with this year's honorees; as shown above, there were many, many more bands and artists who, from a quality and longevity measure, were WAY more deserving of induction than most of this lot.  With that being said, I really don't have much to complain about here; most of these artists were at least borderline cases, according to the

formula. The only selection I really have a problem with is Bon Jovi - in my opinion, this band shouldn't even be in the same league with most of the ones being considered this year. For them to get in before Kate Bush, before Radiohead, before even J. Geils, is a travesty. Needless to say, I'm not a big fan. And I'm hard-pressed to see what sort of indelible mark Bon Jovi has made on popular music... other than a skidmark.

And so much for that. 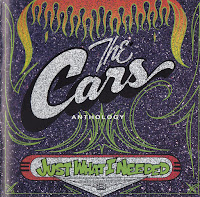 Anyway, in honor of this year's Rock Hall inductees, I offer to you all Just What I Needed: The Cars Anthology, a career-spanning two-disc compilation of the band's hits, jointly released by Electra Records and Rhino Records on November 7th, 1995.

I'm not offering up any hard-to-find Cars bootlegs here - just a straightforward "best of" collection. Yeah, I guess you could say I didn't put much effort into this post... just as the Rock Hall of Fame selection committee seemingly failed to put any effort into this year's selections. But at least by now you know that I'll make up for this lackluster post with my subsequent offerings; we'll see if the RRHOF will do the same in years to come, start to think outside of the box and consider artists solely on their merit and not on the Hall's potential to commercially exploit them.

'Nuff said, other than enjoy, and as always, let me know what you think.

* - This is reportedly a true story about comedian Milton Berle and his reputed infamously huge penis, although the version below isn't verbatim: Berle and Jackie Gleason were sitting in a steam bath in downtown Hollywood one day, when a man walks in, confronts him and says, "Uncle Miltie, I've heard too much about your legendary Hollywood schlong. I think mine's bigger. I want to compare!" The man whips off his towel and reveals a substantial, impressive member. Berle takes a long glance at it, sighs, sets his cigar down, and proceeds to unwrap his towel. Jackie Gleason quickly interrupts and says, "Miltie, show only enough to win!" (Berle later said: "It was maybe the funniest spontaneous line I ever heard").