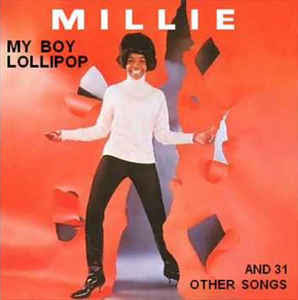 One of twelve children born to a sugar plantation overseer in Clarendon, Jamaica, Millicent Dolly May ("Millie") Small's rise to fame began in 1960 when she was twelve years old, with her participation and subsequent victory in the popular and influential Vere Johns Opportunity Knocks Hour talent contest on RJR radio, broadcast nationwide in Jamaica (a show that also launched the careers of Alton Ellis, Desmond Dekker, Laurel Aitken and The Wailers, among many, many other music giants). After her victory, she began working with acclaimed producer Coxsone Dodd, who paired her first with Owen Gray, then with Roy Panton, for a series of well-received Jamaican R&B/"bluebeat" singles. Producer Chris Blackwell, seeing her local success, began envisioning bringing Millie's music to a wider audience, and after stepping in to become her manager and legal guardian, brought her to London in late 1963 for further training in speech and dance in anticipation of an international launch.

Millie's initial recording for Blackwell in England, "Don't You Know", did nothing over there. Searching for a potential hit, Blackwell recalled a record he purchased in the States in 1959, a minor hit in 1956 for an obscure singer, Barbie Gaye, called "My Boy Lollypop".  He changed both the spelling (from "Lollypop" to "Lollipop") and arrangement (from an R&B "shuffle" style to a similar shuffling but modified bluebeat variation called "ska"), and had Millie's version 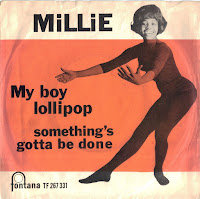 released in England by March 1964 (not on Island Records, but on Fontana, due to the strain the record would have put on the former record company's resources).  The song was a smash hit, reaching #2 in the UK, US, Canada, Australia and New Zealand, topping the charts in Ireland and selling over six million copies worldwide.  Cconsidered the first commercially successful international ska song, Small's version of "My Boy Lollipop" helped to launch Island Records into mainstream popular music. To this day, it remains one of the best-selling reggae/ska hits of all time.

For a brief moment in time, Millie was the toast of the music world. achieving international fame at the tender age of sixteen.  She appeared frequently on British television during that time, both in musical performances (she was a guest performer on the May 1964 TV special Around The Beatles, and had her own Ready! Steady! Go! special, "Millie In Jamaica" in early 1965) and dramatic performances (she was featured in ITV's Play Of The Week "The Rise and Fall of Nellie Brown", airing during the 1964 holiday season).

In the immediate wake of "My Boy Lollipop", Millie Small followed up with a couple of smaller hits (her next release, "Sweet William", made the UK Top 30 and US Top 40). But her chart presence and attendant fame dwindled very quickly, with her last appearance in the British Top 50 occurring in late 1965, when her song "Bloodshot Eyes" reached #48. Her recording contracts with Island and Fontana ended in 1968. After a brief surge in her exposure in the late Sixties, coinciding with the emergence of reggae music, Small ended her recording career in 1971 and moved to Singapore for a couple of years. She returned to England in 1973, the same time a major compilation of her work was released, then all but fell off the map for several years.

In 1987, a British news service searching for her whereabouts for the past fifteen years discovered that Millie Small was destitute, living in a filthy hostel in London with her toddler daughter. A fund was established for her livelihood, and in that same year came the first of several awards and special recognition to her from the Jamaican government for her pioneering and groundbreaking music career. Millie continued to live in London until this past year, when she died of a stroke there on May 5th at the age of seventy-two.

"My Boy Lollipop" is a great song, a true classic. But to be frank, I seriously doubt that she could have sustained a long-term career... probably because a little bit of Millie Small goes a long way; her high-pitched vocals - described as sounding like "a dentist's drill" or "a chipmunk on helium" - were acceptable enough in small doses, but wearing on listeners over a full album.

But I'll let you determine that for yourself. In commemoration of her life, here's a definitive compilation of all of Millie Small's solo hits, My Boy Lollipop Plus 31 Others, released by Comb A Rama on October 20th, 2011. Have a listen and let me know your thoughts.