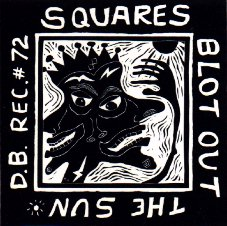 Here's another great compilation of (mostly) 1980s Athens music - Squares Blot Out The Sun, released by DB Records in 1990. DB Records was run by a guy named Danny Beard, who was there at the beginning of the Athens music scene. It was his label that released the B-52's first single, "Rock Lobster", back in 1978. He was also the first to record legendary Athens band Pylon, producing their single "Cool" in 1979.

The guy was a visionary, with a good ear for music. But alas, he was no businessman. DB Records sort of wobbled through the 80s, putting out releases by Love Tractor, Guadalcanal Diary, The Swimming Pool Q's, and other bands that followed in the immediate wake of Athens' first wave. A lot of these bands were college and independent radio staples back then, but that didn't really translate into album sales.

Squares Blot Out The Sun was supposed to have been released in late 1985, but due to the label's financial problems, it didn't hit store shelves until 1990, when DB Records was on its last legs. The late release was both a blessing and a issue for the album. A curse in that, instead of focusing on a specific period, what was happening in Athens in the early years (from about 1979 to 1985), the record is all over the place, featuring bands from as far back as 1978 and as recent as 1990. But the blessing of this is that more songs are included on the disc, including some gems by some pretty unknown/unheralded bands.

Pylon has two cuts featured here, but there are also songs by other important but obscure Athens bands, including Oh-OK (Michael Stipe's sister's band), the Brains, and the Fans (quick side note: the Fans were the band who, in the late 1970s, were the ones who were supposed to "make it", and were setting

themselves up for major label recognition . . . until suddenly, out of the blue, the B-52's appeared on the scene and completely stole the Fans' buzz. Read the book Party Out Of Bounds by Rodger Lyle Brown for the full story of this rivalry). Some of my personal favorites here include the party anthem "Neat In The Street" by the Side Effects, Coolie's "Richard Cory", and "Bidin' Time" by the Reivers.


This album is a good companion to Athens, GA: Inside/Out (posted earlier), as the two together will provide you with a pretty good overview of what was happening musically in the town during the 1980s. Enjoy, and let me know what you think: