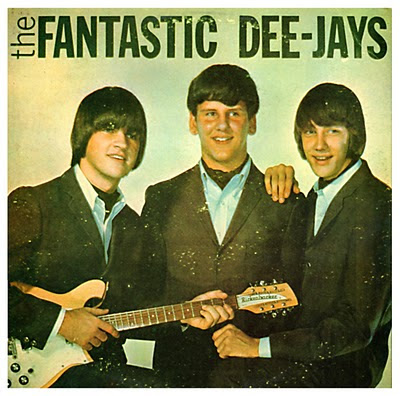 I don't think I ever mentioned this before, but from 2001 to 2007, I was in a band, a decent band at that. The group was made up of high-level executives, my colleagues, at the financial institution where I worked in Rhode Island - the drummer was the Chief Financial Officer, the bass player was Lead Syndicator, etc. The group was already going semi-strong before I joined the company, just doing instrumental jam sessions in someone's basement. One day they told me that they were looking for a singer, and asked if I was interested in the job. Now frankly, at the time, I couldn't carry a tune if it had a handle on it. But I went and auditioned for them one night, and I guess I was passable enough; they let me join up.

Our band did nothing but rock, garage rock and blues covers, stuff like "Devil With The Blue Dress", "Stormy Monday", "Burning Love" - nothing original. But we practiced a lot, and got competent enough to begin playing small local gigs, company parties and Open Mike Nights around Providence, stuff like that. We didn't take our group too seriously - it was just something to do, a way to blow off steam after work. However, as it turned out, we went a lot further with that band than we ever dreamed, and achieved some small measure of national success (on the amateur level, of course). But that's another story that I may tell later on down the line. All in all, it was really fun, and a dream come true for me. One day, maybe I'll post a recording of one of our songs too, for you all to have a laugh over.

We were a pretty close bunch, the group of us, often eating lunch together or going our for after-work drinks on the days we didn't practice. In addition to our regular jobs around the office, we were collectively known there as "the band", which got us a lot of attention in the building, both positive (in that people from work would flock to our gigs, a major selling point we used when negotiating fees with club owners) and not-so-positive (a few folks resented our insular, tight-knit combo, thinking that somehow our membership in an unofficial company band somehow gave us a Teflon coating). Fortunately, there wasn't much of that latter attitude around.

One day, an acquaintance of mine there in the office who often came to our shows handed me a CD of tunes he thought the band might like enough to take a swing at (in addition to being the lead singer, it was the bass player and I who came up with the majority of the group's material). The CD contained songs by an old '60s group called The Fantastic Dee-Jays. I'd never heard of them before, but the guy who gave me the recordings had an affiliation with the band - way back when, his dad was their rhythm guitarist. 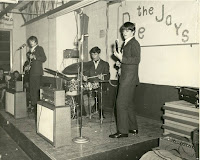 The Fantastic Dee-Jays were a Pittsburgh-area (actually, out of McKeesport) group founded in 1964 by three 16-year-old high school students: Denny Nicholson on lead guitar, Dick Newton on rhythm guitar and Tom Juneko on drums (note that the band used an unusual bass-less setup). They were a straight-up, literal garage band, practicing at Newton's house after school; just a bunch of kids goofing and having fun.

However, in early 1965, a local radio DJ caught wind of the band's sound and began recording them after-hours on the station's equipment, then playing the songs on the station the following day. These singles began building the band a rabid local following, with kids flocking to their shows. And it generated enough of a buzz to lead to the recording of their one and only album, The Fantastic Dee-Jays, in early 1966, released on Stone Records. Later that year, on June 25th, the band played its biggest gig, opening for the Rolling Stones at the Pittsburgh Civic Center Arena during the Stones' second American tour (in support of the album Aftermath).

But, as things usually happen, the band began to unravel as the members got older and graduated from high school. By the end of 1966, The Fantastic Dee-Jays were history. Members of the original band stayed active, eventually evolving into another local garage band, The Swamp Rats.

It's an old story, told many times before - group gets together, has some level of success, breaks up and moves on - end of story. Sounds like That Thing You Do!, eh? Well, The Fantastic Dee-Jays should have fallen to that level of extreme 60s obscurity. However, the five singles and lone album they cut have long been celebrated by serious collectors of mid-Sixties garage rock, so much so that in 1996, Millennia Records obtained the license for their sole album and rereleased it on their label. In addition to their excellent original songs, the album includes a couple of notable/noteworthy tunes:


- A cover of "Fight Fire" by The Golliwogs, a band that would eventually evolve into Creedence Clearwater Revival;
- "What You're Doing", a Lennon/McCartney obscurity, and
- "T & C Lancers", a song the band recorded for a advertisement for a local shoe store!

We (that is, my band) never used any of the songs on this album, but I came to appreciate and enjoy the energy and simplicity inherent in these tunes. Shoot - I was in a garage band myself, so I could relate.

And I hope you all can relate too - here it is: