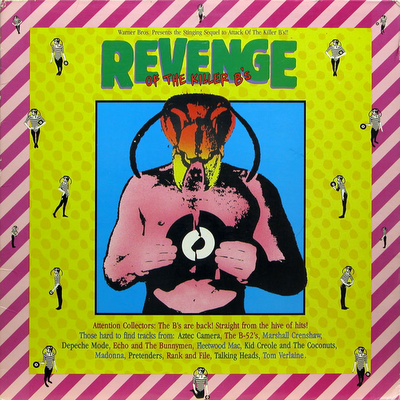 For all you completists out there - here's the follow-up/companion volume to my previous post - Revenge Of The Killer B's, Vol. 2, released by Warner Bros. Records in 1984, in the wake of the superb and successful Attack Of The Killer B's, Vol. 1. Just like its brother, Revenge . . . contains rare b-sides and unreleased material from some of that era's top bands.

Unlike Vol. 1, this album was issued in both vinyl and cassette, although like the previous disc, it has never been released on CD. This post was burned off of my cassette version; the tape differs from the record in that it contains one 'bonus' song, NRBQ's collaboration with 1980s wrestling impresario Capt. Lou Albano. Here's the lineup:

Some of my favorite songs off of Vol. 2 include Depeche Mode's surprisingly peppy and upbeat tune "Sometimes I Wish I Was Dead", Echo & The Bunnymen's "Way Out And Up We Go", and the excellent and funky "You Had No Intention", by the now-woefully unappreciated and nearly forgotten Kid Creole & The Coconuts (here's a great live version from a show the band did in Germany in 1982):

So, there you go - now you have two discs of classic '80s rock and new wave b-sides to enjoy! And I hope you do - as always, let me hear what you have to say regarding this album.