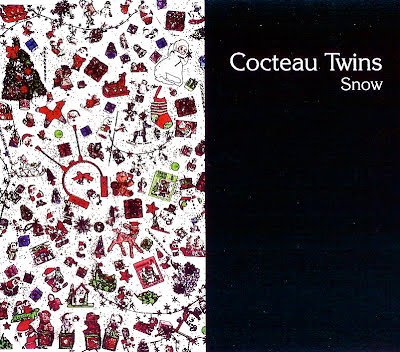 I've got a few posts pending that I have to finish (so check back in the next few days, as I'll probably be backdating them on this site) . . . But I thought I'd kick off my annual series of Christmas-related posts with this: the Cocteau Twins' uber-rare, hard-to-find Snow EP. 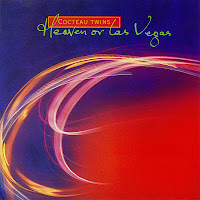 The early 1990s were sort of a rough period for the Cocteau Twins.
The band was just coming off of its enormously successful 1990-91 worldwide tour for their critically-acclaimed album Heaven Or Las Vegas - this was their first tour as a headliner and their first live performances since 1986, so EVERY show was a sold out affair. Singer Liz Fraser and her longtime mate, band co-founder and principal songwriter Robin Guthrie had recently become parents to a little girl. The third member of the band, Simon Raymonde, had also recently married and had become a father. So it seemed that, after years of struggle and toil, the group was finally reveling in the financial and spiritual benefits of their efforts.
But behind the scenes, all was not well in their world. The Cocteau Twins had long been in conflict with their label, 4AD Records, and label head Ivo Watts-Russell, over both financial and artistic differences. And apparently Watts-Russell had finally had enough; nearing the end of their tour, the group was informed that 4AD had released them from their long-standing contract. So at the beginning of 1991, the band was without a representative in the UK (Capitol Records was their U.S. distributor).

But more significantly, Guthrie's life took a turn for the worse. He had been a long-standing alcohol and drug abuser during the '80s, but his addiction became even more pronounced and debilitating during the Heaven Or Las Vegas tour. His problems with booze and dope not only threatened the stability of the band, they caused severe stresses in his family life, resulting in an increasingly dysfunctional relationship with Fraser. The Cocteau Twins were very close to falling apart, personally and professionally, right at the point where they had achieved their greatest comfort and success. 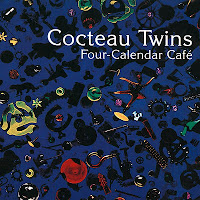 To his credit, upon his return to England Guthrie made a concerted effort to get clean and get his life back on track. But it took damn near three years for him to do so - the band's follow-up to Heaven Or Las Vegas, Four-Calendar Cafe, wouldn't be released until late 1993. During that entire three-year period, the Cocteau Twins made no recordings whatsoever . . . with one exception: the Snow EP.

Simon Raymonde talked about the making of the EP a few years later for a music magazine:


"There's a Christmas record that comes out on Capitol Records (the Cocteaus' US label) every few years. And they were trying to get all their bands to do a cover version of a Christmas song. I didn't think that's what it was at the time. I thought it would be like sitting next to Frank Sinatra. But in fact it would've been, y'know, Skinny Puppy, doing 'Merry Xmas Everybody.' Anyway they'd said, Would you do one? And Liz suggested — it must have been for a joke — 'Frosty The Snowman.' Then Robin went, Yeah, good title, people will think it's a normal Cocteau Twins song with a title like that."

"Once we'd got the music down, I wrote down the lyrics on a piece of paper and said to Liz, Hey, look at these, and we were laughing away. As we were going through it I was listening to Liz's reactions and thinking, this is never gonna get done. She was going, 'He's a very happy soul' — me sing that?! No way, I could not in a million years... 'with a broomstick in his ' — you've gotta be fucking kidding!'" 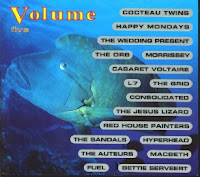 But she DID do it - the Cocteau Twins recorded "Frosty The Snowman" in the fall of 1992. The planned Capitol Christmas album never got off the ground, so the band let the song be included in the December 1992 Volume CD Magazine (issue #5).  The response to their version of "Frosty The Snowman" was so positive, that their new label (after 4AD, they signed with Fontana Records) suggested they back it with another Christmas song ("Winter Wonderland") and release it as a holiday single. The resulting Snow EP had an extremely limited release (one day only) in December 1993 in the UK.
I started looking for this release in the late Nineties, and it took me forever to find a copy of this EP. After several aborted attempts, I finally got my hands on a copy just before I left Texas at the end of the decade; I forget what I paid for it, but it was enough. However, it's nowhere near what sellers are demanding for this CD nowadays - I checked a couple of online retailers, who have copies of this EP for sale for $100 or more. Now THAT'S a rarity!


In addition to owning the CD, I also own a 45-RPM version of this EP, pressed on colored vinyl: 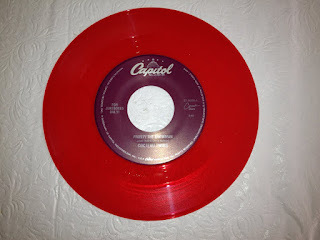 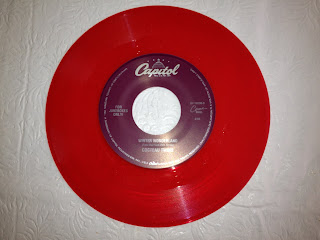 I suspect that this vinyl version is even more rare and valuable than the CD - but I don't care. I'm not about to part with EITHER of them . . .

. . . except, of course, to let you all, my devoted readers, have a chance to hear this music! So, for your holiday listening pleasure, here's the Cocteau Twins Snow EP, released in December 1993 on Fontana Records, and distributed in the U.S. by Capitol Records. Enjoy, and let me know what you think: