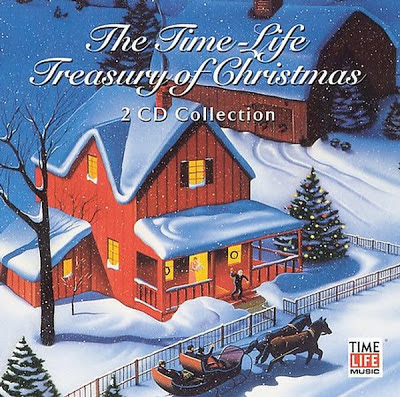 Here it is - the Christmas collection by which all others should be measured: the classic and legendary Time-Life Treasury Of Christmas. I used to LOVE the TV commercial for this album; it would run on local channels starting around mid-October. To me, nothing said "Christmas is coming!" and got me pumped about the upcoming holidays more than seeing this ad:


Time-Life's big selling point for this album was that (at the time) it was the only compilation available which included Bing Crosby's immortal "White Christmas". But there are tons of other 'must have' holiday songs here as well - Gene Autry's "Rudolph The Red-Nosed Reindeer", "Home For The Holidays" by Perry Como, Brenda Lee's "Rockin' Around The Christmas Tree", "The Little Drummer Boy" by the Harry Simeone Chorale - this thing is chock-full of the original classics!

I initially acquired this set on cassette in 1986, the year it was first released. Over the years, Time-Life has rereleased this album several times, in various formats, all with varying track lists as well. The original release had forty-five songs, spread over two CDs/cassettes. But in 2001, in an apparent effort to milk more money out of purchasers, the company modified the collection, splitting the compilation into two separate double-disc albums of 24 songs apiece (The Time-Life Treasury of Christmas and The Time-Life Treasury Of Christmas: Holiday Memories), removing some artist's tracks and adding new ones. While some of these changes were questionable and annoying (I, for one, liked Dolly Parton's "Winter Wonderland/Sleigh Ride" medley and the Beach Boys' "Santa's Beard" and miss seeing them on the record), overall the mods didn't impact the overarching quality of the discs. Still, it would have been nice if they kept all 40-something songs together on one release, instead of splitting them up.

I may post Holiday Memories here later (or maybe not - I have to save something to post for next Xmas!). But for now, enjoy this one! I guarantee that THIS is the holiday album you will be playing the most during your Christmas season!

So, for your listening pleasure, here's The Time-Life Treasury Of Christmas double-disc set, first released in 1986 and updated in 2001 by Time–Life Music in cooperation with BMG Music. Enjoy, and as always, let me know what you think.