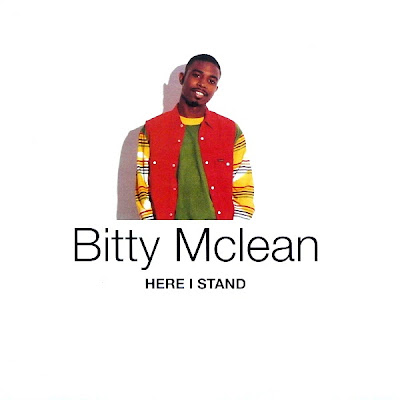 I first heard the song "Here I Stand" during my first austral summer in New Zealand, sometime in early January 1994.  It was like it appeared out of nowhere - I'd never heard of this guy Bitty McLean or his music prior to that time; suddenly the song was everywhere, on every station in the country.


While lightweight, it had a nice sort of old-school dancehall vibe to it, and that was enough to get me to purchase the single and find out more about this young singer.

Delroy McLean was born to West Indian immigrant parents in Birmingham, England in 1972.  During his youth, he was immersed in 60's-era rocksteady and reggae, the sounds of his parents' homeland, and soon became adept at emulating this sound in his own singing.  By the time he reached middle school in the mid-80s, he was fronting as vocalist for some of the major Birmingham sound systems [in the context of West Indian culture, a 'sound system' was a mobile group of engineers, DJs and toasters (MCs) who played popular music (at top volume) at street parties and dance halls - in Jamaica, sound systems were instrumental in the development of ska and reggae, and spurred the formation of local record production companies that ended up spreading this music throughout the world].  Nicknamed "Bitty" due to his young age and small stature, McLean and his singing gained a large local following.

After gaining his GCSE, McLean enrolled in a local Birmingham college, taking courses in sound engineering.  After graduation, he found employment with British roots reggae band UB40, initially as an engineer, 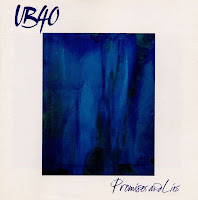 soon graduating to assistant producer roles, and even appearing as an occasional background singer on some of their songs (you can hear his vocals featured on the 1993 album Promises and Lies).

At the same time he was working with UB40, McLean was utilizing his studio access to work on his own music, behind the scenes and on the side of his day job.  In the spring of 1993, he inked a deal with small independent Brilliant Records, and in late July the label released his first single, "It Keeps Rainin' (Tears From My Eyes)", a cover of an old Fats Domino tune from the early 60s.  The song was a sensation in England, staying on the national charts for six months and peaking at #2.  The song was also popular in several other European and Commonwealth countries, topping the charts in Holland and New Zealand (which was strange, because I don't recall hearing it there at 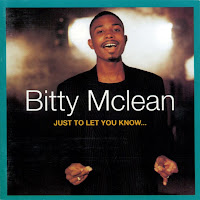 Virgin Records, never one to be caught flat-footed when there was a dollar to be made in music, quickly swooped in to acquire McLean's contract and recording rights from Brilliant, and by the beginning of 1994 had rereleased Just To Let You Know... under their own label.  Learning the lesson of the relative failure of Bitty's second single, Virgin put all of its marketing muscle and expertise behind the release of the third album single, "Here I Stand".  The effort paid off; "Here I Stand" was McLean's second big international hit, reaching the Top Ten in England and elsewhere, including New Zealand.  In the months that followed, Virgin culled two more British Top 40 singles off of this album: a reggae-fied cover of The Shirelles' "Dedicated To The One I Love", which made it to #6 that May, and "What Goes Around", which only reached #36 that August.

Bitty McLean's music was popular and enjoyable enough, but more than a bit derivative.  Unlike his former employers UB40 (who, to their credit, gave their former engineer their full support, and even toured with him for part of 1993), the vast majority of McLean's music avoided any controversial or political themes.  His tunes were mostly inoffensive 'lovers rock' - light, soulful, 'crooners' reggae - a style and stance that put him at odds with the prevailing trends in reggae at that time.  In addition, almost all of Bitty's hits were reggae covers of already-popular songs - along with the Fats Domino and Shirelles songs I mentioned earlier, "Here I Stand" was an old Justin Hines tune.  So while the general public at large was receptive to him, in the world of reggae purists, McLean was considered a sellout and a fraud.  However, as long as his records kept selling, this stance wouldn't be a problem for him. 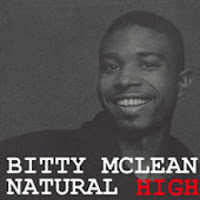 Unfortunately, McLean's commercial success vanished just as quickly as it came to him.  His second album, Natural High, was released in early 1995 but did not chart.  Most of the singles released off of this album reached the extreme lower end of the British Top 60.  Within 24 months of his greatest successes, Bitty was a has-been in the industry.  He quietly returned to his engineering and production duties, working mostly with his old friends UB40.

However, in the past ten years McLean has made a comeback of sorts, releasing a couple of albums of rocksteady covers (2003's Soul To Soul and 2005's On Bond Street KGN, JA) and two studio albums with Sly & Robbie in Jamaica, 2007's Made In Jamaica and 2009's Movin' On.  With his recent work and his tours with Sly & Robbie, his reputation has improved somewhat in hardcore reggae circles.  His latest stuff hasn't reached the commercial heights of his early '90s material, but he seems contented now with improved critical acclaim.

That isn't to say that his early stuff was without quality.  Here, for you consideration, is Bitty McLean's Here I Stand EP, released in England in January 1994 on Virgin Records.  This disc features the original song, a seven-minute dub version, and a "60's version" (basically, McLean singing the same song over a simulated "dusty LP" crackle), along with the non-album single "Don't Be Confused".  Enjoy, and as always, let me know what you think.