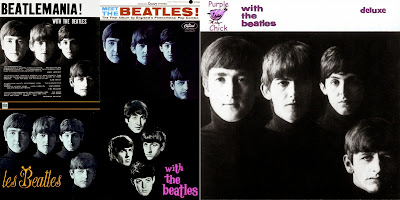 Well, here we are - November 22nd, 2013, the fiftieth anniversary of one of the worst, most traumatic and far-reaching days in American history.  This is going to be a day full of stories, tributes and recollections, graveside homages and pilgrimages to sites associated with that fateful day.  I already provided my reflections on the Kennedy assassination, and my journeys to and observations of the various locations in assassination lore, years ago in a previous post; I don't see any value or worth in rehashing here what the crime has meant to me throughout my life - you're going to get more than enough of that today, from multiple sources.

The shock and horror of November 22nd, 1963 and its association as a timeline-changing moment has long overshadowed the fact that this date was also one of the most momentous in popular music history.  Not one, but two legendary albums were released on this day: one was the holiday compilation A Christmas Gift For You From Phil Spector, put out in the United States by Philles Records - the grandfather of all holiday records to come.  The other was the British debut of With The Beatles, the band's second long-player, released eight months to the day after their debut album Please Please Me, the Number One album on the UK charts since May of that year. 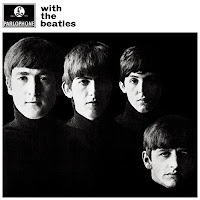 In addition to featuring an iconic and oft-copied/parodied album cover (taken by photographer Robert Freeman), With The Beatles is significant in that it includes the first George Harrison solo composition (the great "Don't Bother Me") on a Beatles record (not that his bandmates appreciated his efforts; it would be nearly two years before another Harrison song appeared on a Beatles album).  It was also the last time that cover songs would make up such a significant proportion of a Beatles album (in addition to George's song, the disc included seven Lennon-McCartney compositions and six covers, including tunes by Chuck Berry and Motown artists, among others).  Their next studio album, A Hard Day's Night, released in 1964, would be the band's first containing all original tunes.

This album was hugely popular in England, taking over the Number One Album spot from its predecessor Please Please Me the week after its release, and remaining on top for almost six months (all told, the first two Beatles albums controlled the top of the British charts for a remarkable fifty-one consecutive weeks).  With The Beatles was only the second album in the UK (after the South Pacific soundtrack album of 1958) to sell a million copies.  However, with all of its popularity overseas, it was literally decades before this album was properly released in the U.S.  With The Beatles was an early victim of EMI's American distributor Capitol Records' tendency to repackage and alter the song lists and running order of the British releases.  Nine of the original album's fourteen tracks would appear on Meet The Beatles!, their first U.S. release, in January 1964; the remaining five would be released in the States on their second Capitol LP, The Beatles' Second Album, that following April.  It wasn't until July 1987 that the original With The Beatles album would be properly released in the U.S.

As for what I'm offering here: these are the Purple Chick bootlegs of this great album, put out in 2004 and gathered up by yours truly in that legendary week-long downloading marathon way back when . . .  This set includes mono and stereo mixes of the original songs, along with a third disc full of rehearsals and aborted takes of some of these classics.  If you have any prior experience with Purple Chick product, then you'll know that the packaging and sound quality of this music will be impeccable, as always.

So, let me offer up to you all one of the few bright spots from that sad and shocking date back in 1963: The Beatles' three-disc With The Beatles compilation, released by the good people at Purple Chick in 2004.  This music is provided not to drown out the thoughts and feelings regarding JFK on this somber anniversary, but to remind us all that the world is never completely evil or tragic, and even in the worst of times, good things can still occur.  Enjoy, and as always, let me know what you think.