Steinski & The Mass Media - "The Motorcade Sped On" 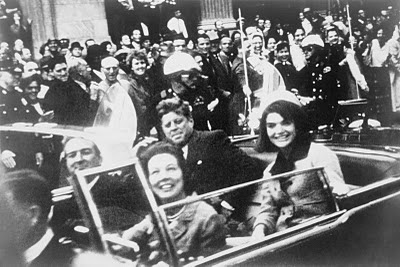 A friend of mine gave me this, way back in 1989. He was into different sounds, as I was, and he was a loyal reader of all the important British music magazines - Melody Maker, New Musical Express, etc. This song was a free insert given away in the February 1987 issue of NME, and as such, has never been officially released for sale anywhere.


I've had an interest in the Kennedy assassination since I was eleven years old. In the mid-70s, my parents subscribed to a short-lived liberal muckraking magazine called New Times. I read everything I could get my hands on when I was a kid, and I used to sneak looks at this grown-up glossy as much as I could. One of the last issues of New Times dealt with the controversies surrounding that day in Dallas, a subject that, up to that point, had never entered my conciousness (I was born just after, and I was too young to really remember the assassinations of 1968, so I had no feel for the turmoil and angst of the Sixties). That article gripped me, and from then on, I read anything I could find regarding the assassination, the investigation and the critics. I finally got to Texas in my mid-thirties, when I accepted a job in Irving, near Dallas. So the first thing I did upon arrival there was drive to Dealey Plaza (by that time, I knew the assassination route so well, I didn't need a map to get to downtown Dallas). I practically crashed the car on my first drive through there - I knew I was driving through HISTORY.

During my time living there, I managed to get to all the sites important in assassination lore: I sat up in the railroad tower behind the stockade fence, now reeking of hobo piss, where Lee Bowers claims he saw "something" that day; I walked down the ramp into the parking garage of the Dallas Police Headquarters, and stood at the spot where Oswald was shot (just like in 1963, the cops arrived to roust me, but just like Jack Ruby, they arrived far too late to thwart my plan); I've seen the tiny x-ray room at Parkland Hospital that used to be Trauma Room #1, where JFK died; I've been to Oak Cliff, and walked Oswald's purported route from his old rooming house to East 10th Street, the site of Officer J. D. Tippit's murder (there's no way he made that walk in under ten minutes - either he ran the whole way and no one noticed him (not likely), or someone drove him there (which implies he had help, henceforth a conspiracy)).

What I'm saying is, I KNOW the Kennedy assassination (however, I will refrain from offering up my opinions on it - there's already been plenty of that, by folks more knowledgable than me). And this song is as good a summation of that time in American history as exists. It's a history lesson you can dance to! I hope you like it.