Various Artists - Not All That Terrifies Harms 7" 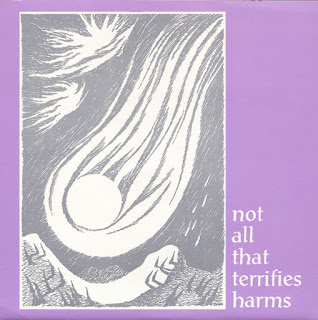 Late in 2016, I provided a requester, Jon Der, with a link to my World Of Pooh Land Of Thirst posting from a few years back, and in the process had a great back-and-forth dialogue with him about bands we were mutual fans of, including this one and The Fall (my all-time favorite band, as I've mentioned ad nauseum (and recently shown) here on this site). Jon clued me in to the news that an in-depth oral history of World Of Pooh had just been published in the then-latest issue of Jay Hinman's Dynamite Hemorrhage fanzine, a podcast/magazine devoted to underground alternative music; it was that article that sent him on a search that led him to my site.

Information on the great but obscure World Of Pooh is extremely hard to come by in this day and age, so of course I was champing at the bit to read the story. As the article was (then) not an online posting, but a print story only, Jon kindly scanned it for me from the magazine copy he had in his possession.

All in all, "World Of Pooh: The Oral History" is a superb and informative article. Band members (guitarist Brandan Kearney, bassist Barbara Manning and drummer Jay Paget) and other friends/scenesters from that time offer up their recollections and reminiscences of those heady, frenetic bygone days, the creation, rise and dissolution of an underground and generally unheralded-in-their-time rock band. The piece filled in a lot of gaps in my knowledge about the group. 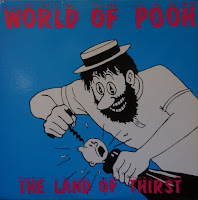 I was especially interested in the section regarding the writing and recording of The Land Of Thirst, the band's sole LP release and one of my all-time favorites. When I did my write-up on this album all those years ago, I did so under the assumption (based on clues provided in the Trouser Press Record Guide review and other sources I'd found like this blog posting from almost a decade ago) this this disc was the brilliant but intense product of a vicious, painful breakup saga then unfolding between Kearney and Manning. To quote that post:


Apparently, [they] had been dating for a while, and by the time the record was being recorded, their relationship was on the rocks. They took out their relationship strains not directly on one another, but like most other couples with problems they addressed their angers and frustrations with one another indirectly, in their case through the songs (I understand they broke up soon after this record came out - which makes sense, since the band also ceased to exist around that time).

However, in the course of reading "The Oral History", I became aware that what I considered to be gospel and the "true Hollywood story" regarding WoP and their music wasn't quite accurate.

The first (and most important) point of correction is the most pertinent and far-reaching, in terms of my understanding this band - Manning and Kearney were never a couple, per se. Sure, they spent a lot of time together in their musical and social pursuits... but this didn't develop into any sort of romantic attachment. There was already more than enough madness swirling around in their lives while they were in the band. But that craziness had nothing to do with any sort of long-term "lover's spat", and more to do with the weird, tense and uncertain atmosphere inherent in being in an obscure band playing in San Francisco's indie/underground scene in the late '80s/early '90s. 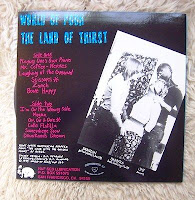 
"We did have some misgivings about using the photo... but it looked enough like us that it was hard to say no... Besides, we were always using sexual imagery... I sometimes worried that we were confining Barbara, or that she'd feel like we were. The picture is ambivalent, which struck me as poignant at the time. It's not very well thought out, but you could say that about any decision we made back then."

In short, the group played at being weirdos and freaks, with Kearney and Manning upping the ante by semi-pretending to be more than just band mates... and people believed it. And oddly, after a while, the members of World Of Pooh began buying into that narrative as well. As Manning observed in the article:

In the wake of the album release, and in the process of living up to this created narrative in the city's music atmosphere of the time, tensions began rising within the group. This led to bickering and conflicts between the members that eventually began being displayed in their live performances - many times exacerbated by prodigious booze consumption before and during their act. A friend of the group provided the following memory/assessment in the article:


"[Those] onstage disagreements of whatever were literally showstoppers. The big question was always: would they stop sniping at each other long enough to play another song let alone finish the set? Intraband relations seemed to be getting worse the more shows they played, but musically they kept getting better and better... For a while they were one of the best bands in the city. Talking to other fans at their shows, we had the feeling that they weren't going to be around much longer... The last time I saw them, it was their biggest show to date and by then they were outright arguing on stage in between songs... Despite how great the music was, the set felt like a fiasco and, by the time they left the stage, I had the distinct impression that it was going to be their last show."

This friend was almost correct regarding the timing of the band's demise - it was pretty much over for World Of Pooh by the end of 1989. However, circumstances intervened somewhat in early 1990.


Brandan Kearney: "People assume we broke up after our East Coast tour, but we'd essentially broken up before the tour... the strain Barbara and I were under was not sustainable... In the midst of this uncertainty, we accepted an offer to tour the East Coast for about a week... This gave us a reason to hold things together, but I think it also gave us the sense of an attainable endpoint..." 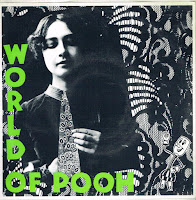 After (and despite) well-received shows in Boston and New York in March of 1990, World Of Pooh broke up immediately after the end of this tour.  There were a couple of posthumous EP releases (G.H.M. later in 1990; A Trip To Your Tonsils in 1991), but even those led to more trouble and conflict within the group.  The tracks on the latter EP were part of a set of eight or so that World of 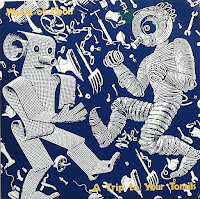 Pooh had been developing for a planned full-scale album follow-up to The Land of Thirst (the EP included the only four tunes closest to completion, remixed and remastered by Kearney). During the final mixing of these EP tracks, Kearney added some sound effects that Manning, when she heard it/them, interpreted as negative coded messages directed at her personally... with the result being that the relationship between the two fully ruptured, and they didn't speak for many years. Fortunately, they eventually reconciled, even reuniting for a one-off show in late 2015.

Kearney pithily summed up the rise and fall of his band, and their overall dynamic:


". . . when you scrape away the dazzling veneer of also-ran indie-rocker glitz, you're really just talking about emotionally unstable people with very little impulse control and a dangerously high alcohol tolerance."

He also had this to say regarding their only album:


"The only thing that bothers me about the album's latter-day reputation is the myth and lore of Our Unhappy Relationship, which I sometimes worry is the only reason people are still listening to it. The fact is, Barbara and I were getting along just fine when we recorded The Land Of Thirst. People sometimes present it as some indie-pop version of Rumours or Shoot Out The Lights. I know we brought this on ourselves through public displays of madness and worse, but most of that stuff happened after the LP had been written and recorded. Love it or hate it, The Land Of Thirst was the product of a somewhat crazed but extremely close and supportive working relationship, and I dislike seeing it portrayed as an album by and about people who were at each other's throats. Terrible things happened, to our eternal discredit, but most of them happened later on."

So, from the horse's mouth itself, I hereby stand corrected.

The very end of the article listed World Of Pooh's entire discography, all of the music they released on Nuf Sed and all of their compilation appearances. I knew that some of the stuff listed there (like the band's rare early-career cassette-only releases No Little Taxis Shining Their Light and Dust) I'd never have any hope in hell of ever tracking down. But as for one-off compilation tunes, my WOP collection was fairly complete, except for one selection: a cover of Blue Öyster Cult’s “Dominance and Submission”, included on an obscure 7" EP in 1992. Being the obsessive completest that I am, I made it my mission to track down a copy of this record and song, and after an exhaustive search, found the vinyl for sale from an overseas source - couldn't buy it fast enough.

Enjoy the Not All That Terrifies Harms 7", a ridiculously hard-to-find joint release by Ajax and Nuf Said Records in 1992, scorched off of my vinyl copy, featuring some rare releases by San Francisco bands both legendary and obscure - including Thinking Fellers Union Local 282's "Trevor" (a track otherwise only available on a 1995 Japanese import compilation) and the only source for World Of Pooh's Blue Öyster Cult cover (which, of course, is excellent).

And as an added bonus, here's a link to the entire issue of Dynamite Hemorrhage #3, now online, containing "World Of Pooh: The Oral History" - a much cleaner version of my scanned copy from earlier last year.

Enjoy, and as always, let me know what you think.

Not All That Terrifies Harms EP: Send Email
Posted by HFM at 11:58 AM 8 comments:

Labels: 1992, Ajax Records, Alternative, Barbara Manning, Indie, Nuf Sed Lubrication, San Francisco, Thinking Fellers Union Local 282, Various Artists, World Of Pooh
Newer Posts Older Posts Home
Subscribe to: Posts (Atom)
Saying "Thanks" for the music you receive from here costs you absolutely nothing, and yet is worth quite a bit to me… If you can't bother leaving a comment on this blog for the first album/set we send you, don't bother making a request For a second album…