A year ago today, I finally made the effort to put together my own music blog. I'd always wanted one, but at the time the process of establishing one seemed like something exotic and difficult, a thing that only truly savvy technogeeks did. When I finally made up my mind to give it a try, I was surprised at how easy making my own blog turned out to be.

I cannot tell you how much fun it has been, sharing my stories and music with you all over the past 365 days. I initially assumed that no one would take the time to find or read my words, or have any interest in this little corner of the Web that I designated my own. But over the past year, almost 15,000 people have taken a chance, and come to check out what I had to say. Some folks just passed through; some have lingered a while; and many have left comments with me, sharing their own thoughts about the things and events I've written about. To all of you, I just want to say "Thank you".

While my output has slowed in recent months, that does not mean that "Pee-Pee Soaked Heckhole" will be ending anytime soon. I have many more stories and tunes to share with you all (in fact, I have a number of posts that are currently in progress - just looking for the right words and the right time to finish them). I hope that you all keep on coming back here in the weeks and months to come, and please keep letting me know what you thing of my funny little blog.

This thing turned out to be a lot more fun that I ever thought it would be.

Poll Results - "Assume that the Beatles stayed together through the 1970s; which songs by the solo Beatles would have appeared on group albums?" 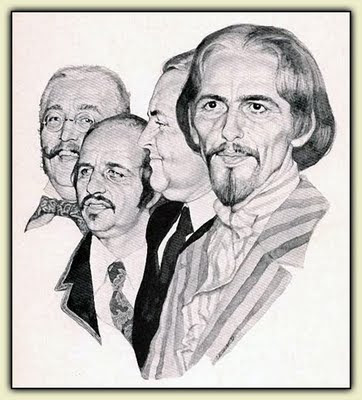 Had a lot of response to this poll question; I appreciate all of the participation. For my hypothetical Beatles greatest hit album 1971-1979 single-disc release, I used your votes - any song getting more than 50% (8 or more votes) was automatically included.

Generally speaking, Paul and Ringo's solo output, while successful in its time, appears to be poorly regarded in terms of the complete Beatles ouevre. A lot of the later stuff McCartney did with Wings, especially his pop hits "Let 'Em In" and "Silly Love Songs", were deemed unworthy, as was much of Ringo's 1970s stuff, most of which was lightweight at best. And generally, I agree with this assessment. Could you imagine Paul showing up at the studio and attempting to press John and George into recording something like "Coming Up"? Neither can I - they would have laughed him out of Abbey Road studios!

That being said, there were some songs that didn't make the 50% threshold that I feel the group would have definitely considered recording together. "Uncle Albert/Admiral Halsey", an early solo McCartney number, would easy have fit onto a Beatles album coming immediately after Abbey Road. And "Photograph" was the kind of song the band would throw at Ringo for his traditional one-song-per-album lead vocal. I've always thought that the boogie-woogie 4/4 beat of "Helen Wheels" would have been a logical followup to the stripped-down sound the Beatles showed on Let It Be. And I can't understand why "Give Me Love" didn't gain enough votes here - it's also one I thought would be right in the band's wheelhouse.

For those of you keeping track, that's five Lennon songs, four McCartney songs, three Harrison songs, and two Starr songs. The complete vote breakdown is below:

Again, thanks for voting. I'll post another poll soon, when I can think of a good topic. If you have anything to say regarding this survey, I'm always happy to hear your comments.

[ . . . and (finally) acting upon a great recommendation from a friend of mine here on this blog, here is a a faux-greatest hits compilation based on the selections above (with a couple of bonus tunes added):

Labels: 2011, Rock, The Beatles
Newer Posts Older Posts Home
Subscribe to: Posts (Atom)
Saying "Thanks" for the music you receive from here costs you absolutely nothing, and yet is worth quite a bit to me… If you can't bother leaving a comment on this blog for the first album/set we send you, don't bother making a request For a second album…