Nirvana - Into The Black (6-disc set) 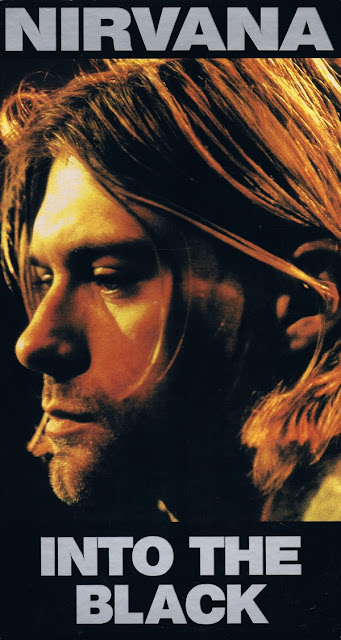 Hard to believe it's been THAT long, and even still harder for me to believe that there are young adults walking around nowadays who either weren't alive or old enough to be aware of what was going on in music at that time - all of the great tunes and bands that were on the scene, with Nirvana in the forefront. Gotta say, the thought that people missed out on those heady times when they were happening, the times I lived and reveled in and enjoyed... well, it makes me feel sad, and kind of old.

I've already said more than enough about Cobain's band and his suicide in a post I published five years ago on the 20th anniversary of the event (again - wow, it's been that long)... no need to elaborate or belabor that point here again. Instead, to commemorate the life and legacy of the now-immortal Kurt Cobain, I'll just shut my mouth and offer up the following Nirvana hard-to-find for your listening pleasure: the legendary Into The Black box set.


"Into The Black is a six CD box set released by Tribute in 1994, which is often considered the preferred Nirvana bootleg box set due to it being compiled by a knowledgeable fan... Several recordings were obtained specifically for the set and it contains a large amount of material that had not yet surfaced up to the time of its release. The extensive 116-track collection includes demo recordings, two band-made compilations, the 1992 Reading Festival performance and BBC radio sessions from Maida Vale Studios. The set also contains two Seattle shows; the 1991 Halloween homecoming performance for their North American Nevermind tour, and their last ever American show in 1994."

Here's the song lineup, and a summary of the sources of these contents: 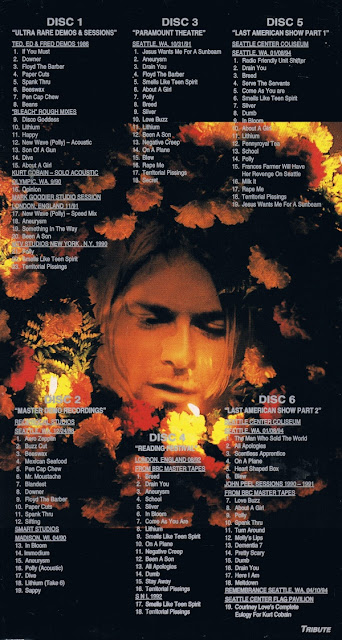 
* Tracks 1-9 from Reciprocal Recording, Seattle, WA on January 23, 1988, with the exception of "Beans".
* Tracks 10-12 recorded at Smart Studios, Madison, WI in April 1990 and are sourced from the 7" vinyl bootleg Total Fucking Godhead. "Sappy" and "Polly" can be found on Master Demo Recordings in better quality.
* Tracks 14 and 15 from the November 1, 1989 VPRO session recorded at Villa 65 in Hilversum, Netherlands for Nozems-a-Gogo.
* Tracks 17-20 from the November 9, 1991 BBC session at Maida Vale Studios, sourced from the 7" vinyl bootleg Smells Like Nirvana. "Something in the Way" remains unreleased, while the other songs appeared on Incesticide.
* Tracks 21-23 recorded live at MTV Studios, New York, NY on January 10, 1992.


* Tracks 1-12 were a band made compilation of songs from two Reciprocal Recording sessions on January 23, 1988 and June 1988, with the exception of "Escalator to Hell". When Into the Black was released, only four of the songs were commercially available.
* Tracks 13-19 recorded at Smart Studios, Madison, WI in April 1990. They were taken from a cassette Nirvana was sending to record labels in 1990, after the original intention for release as the second Sub Pop album was scrapped.


* All tracks from a near complete soundboard source recorded live on October 31, 1991 at the Paramount Theatre in Seattle, WA.
* The only tracks officially released include "Jesus Doesn't Want Me for a Sunbeam" featured on the DVD portion of With the Lights Out and "Negative Creep" included on From the Muddy Banks of the Wishkah.
* Other bootleg CDs to feature this show include No Place Like Home on Murphy Records, Happy Halloween on Genocide and Trick or Treat on Kiss the Stone.


* Tracks 1-16 from an incomplete soundboard source recorded August 30, 1992 at the Reading Festival, taken from the second FM broadcast.
* Although many bootleg CDs feature this performance, they have become obsolete since the release of Live at Reading. However, there is still some interest with collectors because the FM broadcasts contain an alternate sound mix. In addition, the bootleg CD releases maintain better continuity as compared to the official release CD version, which is heavily edited.


All tracks from a complete audience source recorded live at the Seattle Center Arena in Seattle, WA on January 8, 1994, with the six final tracks of the performance featured on Last American Show Part 2.


* Tracks 1-6 from a complete audience source recorded live at the Seattle Center Arena in Seattle, WA on January 8, 1994, with the first 19 tracks of the performance featured on Last American Show Part 1.
* Tracks 7-18 from BBC sessions recorded in 1989 and 1991 at Maida Vale Studios.
* Track 19 is Courtney Love's complete eulogy for Kurt Cobain recorded at the Seattle Center Flag Pavilion on April 10, 1994.

So, in memory of Kurt Cobain, I proudly offer up the Into The Black compilation, released on the bootleg label Tribute in 1994. Enjoy, remember, and as always, let me know what you think.

Labels: 1994, Bootleg, Demo, Grunge, Nirvana, Rock, Tribute
Newer Posts Older Posts Home
Subscribe to: Posts (Atom)
Saying "Thanks" for the music you receive from here costs you absolutely nothing, and yet is worth quite a bit to me… If you can't bother leaving a comment on this blog for the first album/set we send you, don't bother making a request For a second album…