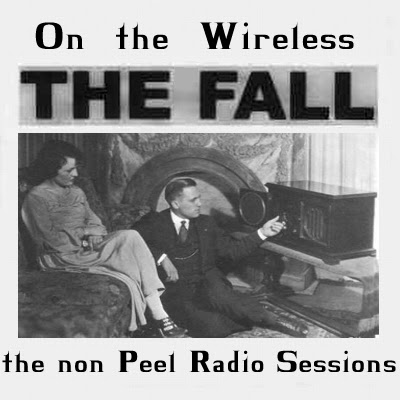 Today marks the 20th anniversary of the infamous on-stage set-to between members of The Fall at Brownies in Lower Manhattan on the tail end of their American tour that year... the fight that led to the immediate and permanent departure of longtime band stalwarts Steve Hanley, Karl Burns and Tommy Crooks and forever changed the direction of the group. From YouTube, here's the video of the entire shambolic set, with band leader Mark E. Smith instigating the situation approximately 25 minutes into the hour-long gig - it quickly deteriorates from there:


The spring 1998 U.S. tour of The Fall started out on a bad note. For some reason or another, drummer Karl Burns and guitarist Tommy Crooks missed the transatlantic flight from Manchester to the States - a situation that, of course, drove Smith into a towering rage even before the plane got off the ground in England. The two showed up in New York later that day, but that didn't improve Smith's attitude.

Another major point of tension/contention centered around the itinerary - it was scheduled to be a week-long campaign and then some, beginning in New York and moving on to venues up and down the U.S. East Coast from Boston to Washington DC, with shows practically every night. But bizarrely, the group was only booked to stay in New York City hotels. Why?

Well, back during the 1993 American tour in support of the then-recently released The Infotainment Scan, when there was (then) plenty of label cash to throw around, The Fall were provided suites at the ultra-swank Gramercy Park Hotel for 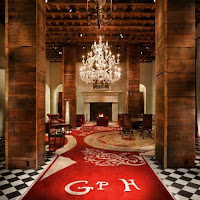 a week. Smith took a particular liking to this style of living while on tour in the States, so much so that for The Fall's return visit to the States in 1994, he insisted upon staying there again, and made the hotel his central point of operations during their East Coast concerts. As a consequence, the band would play venues hundreds of miles away from the city, only to pack up their gear each night and be bused back to Manhattan... arriving back at the Gramercy Park often in the wee hours to stumble exhaustedly into their opulent beds for a couple of hours of sleep, before having to load up and be out on the highway again later in the day. Needless to say, this was not an ideal situation for anyone in the group (other than Smith, I suppose). Fortunately, there were only three or four East Coast dates on that tour, before The Fall headed to venues in the Midwest and West, so the band members sucked it up for that short period.

During this 1998 U.S. jaunt, Smith once again booked a room at the Gramercy Park for himself and his girlfriend, keyboardist Julia Nagle - an expense the group/label frankly could hardly afford at the time due to some serious tax issues they were facing back home [full disclosure - I've stayed at the Gramercy Park Hotel a couple of times myself in the past; believe me, cheap it ain't...]. The rest of the band was ensconced across town at the decidedly more downmarket Quality Hotel East Side (apparently, the concern with economy and on-tour penny-pinching during this period didn't apply to Smith personally...). As with the 1994 visit, The Fall's gigs (all in the Northeast U.S.) were arranged as before, with the group returning to New York each night to ensure that Mark got to spend as much time as possible wallowing in the hotel's grandeur. But there were twice as many East Coast shows on this tour than there were in 1994. It was inevitable that fatigue and bad feelings would begin to set in among band members.

And then, Smith queered the deal almost immediately upon arriving in America, before the first note at the first show was even played. Obviously still in a rage regarding Burns' and Crooks' tardiness, Smith proceeded to trash his hotel room practically the minute he walked into it - breaking lamps, telephones and furniture - and was thrown out of the Gramercy Park within an hour of arriving. The main "justification" for making those long back-and-forth bus trips to and from places like Boston and Philadelphia was thereby removed... but it was far too late to arrange for lodging closer to the tour stops, and the transportation contract couldn't be cancelled. Smith and Nagle were forced to stay at - and return each night to - the same ramshackle Manhattan Quality Inn with the rest of the band... a situation that did nothing to improve the attitudes of any of the involved parties.

The first couple of shows on the tour (at Coney Island High in New York, The Loop Lounge in Passaic, NJ and The Middle East in Cambridge, MA) reportedly went well, with no overt outbursts or out-of-the-ordinary aggression noted from Smith towards his bandmates (although it was noted in a couple of news outlets that Smith appeared to be sporting a black eye during the New York gigs - who knows if those reports was accurate, and if so, the source and circumstances behind that shiner). But as the tour went on, with weariness increasing and tempers shortening, things began to quickly deteriorate.

Apparently, the first overt conflict occurred during their gig at The Trocadero in Philadelphia on April 4th. From Steve Hanley's 2014 book The Big Midweek detailing his life as a member of The Fall:


"During the gig [specifically, during the band's rendition of "Jungle Rock"] [Mark] tries to push me aside so he can fuck with my amp. It is the first time he has laid a finger on it in years. He's lurching towards it, trying to grasp hold of the knobs like on those machines at the fair that never picks up a toy, no matter how much money you put in and no matter how much the child cries. I push him out of the way with the end of my bass and turn my back. ...I finish the song and walk off, to be joined shortly after by Tommy and Karl, leaving [Mark] with nothing else to do but sing "Everybody But Myself" all by himself."

The three commandeered the tour bus and returned immediately with most of the band equipment to New York, leaving Smith and Nagle in Philly to fend for themselves. To exacerbate an already bad situation, upon their return to Manhattan, the bus was broken into overnight and a large quantity of the group's instruments (including Nagle's cherished keyboards) were stolen. The band got through their next gig, a show on Sunday, April 5th at The Black Cat in DC, with borrowed equipment... but the tension and bad blood within and between the group members was palpable.

All of which led up to the Brownies debacle on Tuesday, April 7th. I won't go into further details regarding that gig; If you're a Fall fan, I'm sure you already know more than enough about it - if not, I refer you to the video above. The site Dangerous Minds has a superb summary of the circumstances behind the fight - check it out here. And of course, the "cherry on top" of that night, with the Fall kaput and the rest of the U.S. tour cancelled, was the after-gig arrest of Smith at the Quality Hotel in the small hours of that following morning, allegedly for assaulting Nagle back in their room... an ignominious end to a tumultuous period.

I've already provided my impressions and opinions on the immediate and long-term impact of the Brownies altercation on the future history of The Fall - no need to reiterate my thoughts here. This post is more concerned with heretofore unavailable/hard-to-find music from the pre-brawl period (mostly) that I happen to have in my possession. 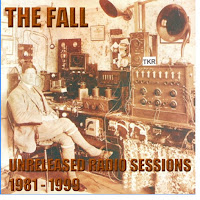 The set provided here (another long unavailable offering from the defunct Symphony Of Ghosts website) appears to be a re-release of/upgrade to 2004's Unreleased Radio Sessions '81-'99 two-disc bootleg - another boot set that I acquired from God knows where (perhaps the old Young Moss Tongue site) many moons ago. Both compilations have almost the exact same contents, although the overall track list is different; here's the lineup, with sources listed (if known):

This just goes to show that John Peel wasn't the be-all and end-all of Fall live sessions; the band did extensive and superb work with a number of radio hosts, both influential and obscure. This set collects the best of their work from that period.

So for your listening pleasure, here's The Fall's On The Wireless (Non-Peel Radio Sessions), a three-disc bootleg made available in the summer of 2005. Enjoy this offering, with the hope that it brightens this dark day in Fall history for you! And as always, let me know what you think.

Labels: 2005, Alternative, Bootleg, England, Mark E. Smith, Post-Punk, The Fall
Newer Posts Older Posts Home
Subscribe to: Posts (Atom)
Saying "Thanks" for the music you receive from here costs you absolutely nothing, and yet is worth quite a bit to me… If you can't bother leaving a comment on this blog for the first album/set we send you, don't bother making a request For a second album…