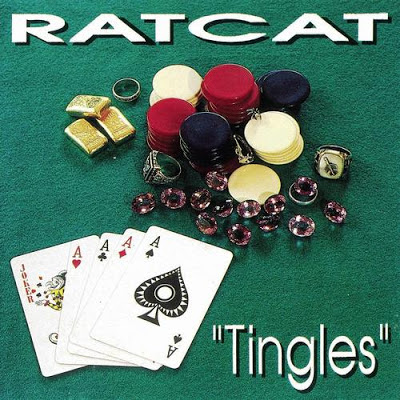 Another great memory from my days in the Washington DC area in the early '90s . . .

I first heard Ratcat's "That Ain't Bad" on the local alternative station there, WHFS, soon after I moved back to the area in the spring of 1991.  They really championed this unknown Australian band, and they HAMMERED this song on their station, day and night.  And it was easy to hear why - the song was catchy, hooky, punky, guitary - all the things I liked in music back at that time, all rolled up into one 3-minute blast.  After a couple of exposures to it, I ran like a bastard for the record store and snapped up an import cassette copy, which I began hammering myself on my car's tape player.  I didn't know much about the band at the time (it being the pre-Internet days), but their music was all right with me.  It wasn't until much later that I learned more about the group.

Ratcat was formed in Australia in 1985 by three Sydney-area teenagers, Andrew Polin (drums), Victor Levi (bass) and Simon Day (guitar/vocals), evolving from Levi and Day's garage band Danger Mouse.  The band paid its dues in the local small-club and party circuit, and gained a following among Sydney's skateboarding and punk communities with a sound that was more guitar-driven power pop than straight-ahead punk, although there were a lot of punk inflections in their music.  In late 1987, Ratcat came to the attention of local indie label Waterfront Records, who signed the band and quickly released their debut eponymous EP before the end of that year.  The record was well received in certain quarters of Australia, but did not chart. 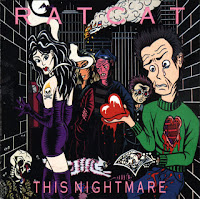 Over the next two years, the band released several singles and one full-length album, This Nightmare, on Waterfront, which again made no great waves on the national charts.  This was mainly due to Waterfront Records' limited distribution and reach, which kept Ratcat's music off of Australian radio and held back the band's success.  Levi got fed up with it all pretty early, and quit the band in late 1988; he was replaced by new bassist John McAteer.  With the relative failure of This Nightmare, the rest of the band also saw the handwriting on the wall; after one final single release ("Saying Goodbye" / "Tura Satana" / "Overdrive") in late 1989, the band said goodbye to Waterfront as well, and signed with indie upstart RooArt in 1990.  McAteer decided to call it quits just before the label switch; he was replaced by Amr Zaid.

While RooArt, like Waterfront, was also a small independent, they had one major factor in their favor - the label had wisely entered into a distribution deal with recording giant Polygram, vastly increasing the exposure of groups on their roster.  RooArt engineered an all-out marketing strategy for Ratcat's first release that November, the 6-song "Tingles" EP.  The label saturated the country with a superb advertising campaign showcasing the band, and shrewdly directed purchasers to buy the disc at their local independent record shops (as album sales in department stores did not count towards the overall Australian Recording Industry Association (ARIA) charts).  The strategy was a bigger success than anyone could have imagined; the "Tingles" EP quickly shot to the top of ARIA's Alternative charts by Christmas, and soon after crossed over to reach #2 on the overall national charts.  The lead song off the EP, "That Ain't Bad", received massive mainstream radio airplay, and also reached #1 on the Australian singles chart.  Here's the video:

A band that could barely fill a mid-sized Sydney club less than six months earlier was suddenly the hottest, most popular group in Australia. 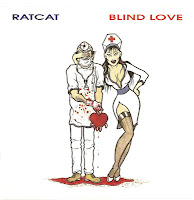 Ratcat followed up on their late-1990 success with their first LP release on RooArt, Blind Love, in April 1991.  Both the album and the lead single, "Don't Go Now", topped the charts by that June.  That spring, the band went on the road, supporting INXS on their huge "X" tour, then going out on their own as the headliner and playing to massive crowds of rabid fans.  In Australia in 1991, Ratcat could do no wrong.

Then the wheels started coming off . . .

Like many other Australian bands before and after them, Ratcat saw its future in the U.S. market.  In the summer of 1991, the band headed over to the States, playing support gigs with the likes of Iggy Pop and a recently reformed MC5.  The shows were well-received, but did little to enhance the group's profile stateside.  By the time they returned to Australia in early 1992, Ratcat-mania had subsided.  The band released two singles and a new album, Inside Out, with new bassist Marc Scully [man, this group went through a lot of bassists . . .], all of which reached the lower rungs of the Australian Top 50.  But Ratcat's bubblegummy, power-pop sound was starting to sound dated, especially in the wake of the rise of grunge music during this period of that decade.  The band released a couple of EPs in 1993 (neither of which charted) and laid down tracks for a third album (which wasn't completed/released until 1997).  But by the end of that year, the band was essentially kaput.

I had no idea about what had transpired with Ratcat; when I moved to New Zealand in early 1993, I fully expected the place to be filled with rabid Ratcat fans like myself.  So I was surprised (and somewhat put out) when some of my new Kiwi friends gave me the big laugh when I told them how much I liked this band.  By that time, Ratcat was being dismissed in one of two phrases: "Those guys are a kiddie band!" (akin to the present-day Jonas Brothers or One Direction), or "Ratcat?  Those guys were washed up a year ago!"

[That reminds me of when I was in high school in Monterey, California in the early '80s, when AC/DC was just getting big here in the States.  We had an Australian exchange student in our class, who used to laugh whenever someone came in wearing an AC/DC tee-shirt - "That band was washed up in Australia two years ago!"  I don't know how true that was, but at the time I believed it!]

In this case, my friends there were right.  With the lack of new releases by the band in the years I lived in Christchurch, I quickly determined that yes, Ratcat was no more, and moved on to new sounds.  But I never forgot that great EP and that incredible song . . .

And it appears that I'm not alone in remembering.  Ratcat has recently been experiencing a wave of nostalgia for their music; the band recently reformed for a one-off show in Sydney, playing Blind Love in its entirely and other hits before an appreciative crowd.  And a (godawful) cover of "That Ain't Bad" was recently showcased in an Australian bra commercial (Simon Day has a short cameo in the ad):


Ratcat is now seen as a pioneer in Australian indie rock, finally providing the band with some long-overdue acknowledgement and appreciation.

And finally, here it is for you to appreciate as well: Ratcat's "Tingles" EP, released in November 1990 on RooArt Records and distributed by Polygram.  Enjoy, and as always, let me know what you think.

Labels: 1990, Australia, Indie, Ratcat, RooArt Records
Newer Posts Older Posts Home
Subscribe to: Posts (Atom)
Saying "Thanks" for the music you receive from here costs you absolutely nothing, and yet is worth quite a bit to me… If you can't bother leaving a comment on this blog for the first album/set we send you, don't bother making a request For a second album…