Various Artists - Woodstock - Back To The Garden: The Definitive 50th Anniversary Archive (38 Discs) 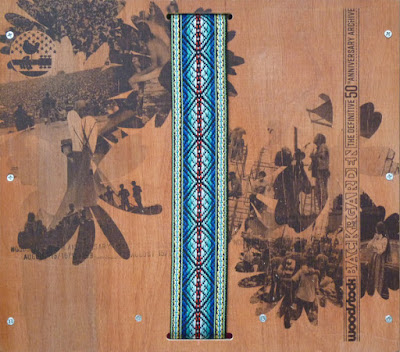 Fifty years since Woodstock... what else can I say that hasn't already been said in the run-up to this historic anniversary? With the reams of memories, commentaries, scholarly dissertations, criticisms, accolades and contextual perspectives published and broadcast over the past couple of months, there is simply no chink of daylight left for a small-time music blogger like myself to add any fresh thoughts or new ideas regarding this seminal, semi-mythical event.

I believe it's the "semi-mythical" part about Woodstock that makes it so hard for modern-day writers to get a handle on the festival, what it was all about, and what it "meant". So much of what most people in this day and age know about Woodstock comes from fragmentary snippets (such as pictures of topless women dancing in the mud, Country Joe McDonald's infamous "Gimme an F!  Gimme a U! Gimme a..." chant, and of course Jimi Hendrix's electrified "Star Spangled Banner") displayed and broadcast constantly over the decades - images that I feel have served to morph the event from simply a gargantuan and well-attended rock festival into this shining, hippie-fied anti-war wonderland of universal hope and community, truly "three days of peace and love". 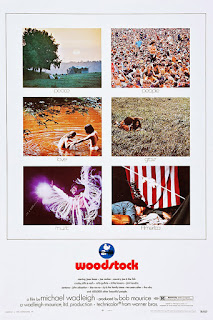 In conjunction with this, Michael Wadleigh's 1970 documentary film of the concert, while celebrated, presented only three hours of the three-day show... but it drew in contemporary audiences of the time and future audiences who hadn't been/couldn't have been in attendance at the original concert with a contrived sense that, by seeing the movie, they HAD been there, and they were feeling the same sort of glow from that time and place.  Of course, that "glow" had less to do with the overall vibe there, and a lot to do with Wadleigh's skillful film editing (it even got nominated for an Oscar in the Film Editing category, a rare distinction for a documentary). In his original four-star review of Woodstock, critic Roger Ebert (who should have known better) stated "The remarkable thing about Wadleigh's film is that it succeeds so completely in making us feel how it must have been to be there", adding in a later expanded review, "...how touching it is in this film to see the full flower of its moment, of its youth and hope."

So, there's a lot of legend and mythology surrounding Woodstock, which I feel skews the perception of the overall concert.  Music producers Brian Kehow and Andy Zax felt the same way regarding the show's legacy, apparently. Instead of presenting to the public only the parts of the festival that fit into the overarching "peace and love" narrative, Zax and Kehow decided to restore and reconstruct the ENTIRE concert, from start to finish, utilizing all available sources. The result of their decade-plus long effort is what I am presenting here today: a 38-disc, 432-track compilation of nearly every song sung, note played and word spoken from the stage in Bethel, New York from the evening of August 15th to the morning of August 18th, 1969, chronologically sequenced (the only tracks missing are two songs from Hendrix's set, "Mastermind" and "Gypsy Woman"/"Aware Of Love", which his estate requested not be included, and a song and a half ("Teenager In Love" and the first half of "Little Darlin") from Sha Na Na's performance due to a gap in the taping). In all, over 250 of the tracks present within this box set have never seen official release.

This set provides more of a "boots on the ground" perspective of the entire event; not just the highs and lows, but some of the more mundane instances and situations involved in the operation of a large rock concert. The many stage announcements included in this set really give you a sense of being there as a participant, and modifies the established view of how it was there over those three days. Pitchfork recently published an article on this set which describes this feeling and function much better than I ever could; here it is.

But I got my hands on the source, the granddaddy, and thus I present it to you for your perusal and enjoyment (or at least for those of you without a spare $800 lying around...) - Woodstock - Back To The Garden: The Definitive 50th Anniversary Archive, all thirty-eight discs, released by Rhino Records just last month, on August 2nd, 2019. Enjoy, and as always, let me know what you think.

Labels: 1969, 2019, Folk, Folk-Rock, Indian, Rhino Records, Rock, Various Artists, Woodstock
Newer Posts Older Posts Home
Subscribe to: Posts (Atom)
Saying "Thanks" for the music you receive from here costs you absolutely nothing, and yet is worth quite a bit to me… If you can't bother leaving a comment on this blog for the first album/set we send you, don't bother making a request For a second album…