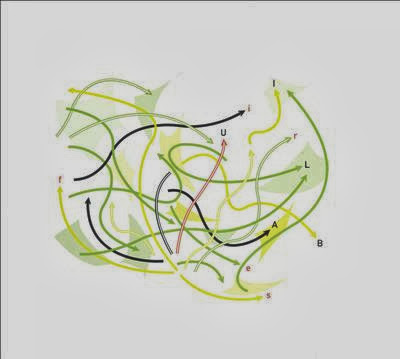 Here's another one of Stereolab's many collaborations during their long band history, this time with New York City-based post-rock instrumental group Ui.   UI, founded in 1990, was known for its frequent use of two bass guitars in their sample-heavy, electronica/dub music, along with other uncommon instruments such as the banjo, tuba and timpani.  These guys (Sasha Frere-Jones (now a writer with The New Yorker), Clem Waldmann and Wilbo Wright) were active for well over a decade, releasing three LPs and numerous singles and EPs before breaking up in 2004. 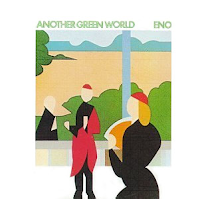 This particular EP was recorded at Southern Studios, London in the summer of 1996, while Ui was on a European tour with Stereolab serving as their opening act.  However, the label didn't get around to mixing and releasing the EP until well over a year later, in late October 1997.  This EP features, among other songs, an excellent cover of Brian Eno's "St. Elmo's Fire", off of his 1975 Another Green World album, along with three radical remixes of the same song.


I don't have any long-winded story related to this disc, other than I recall grabbing this at the old Virgin Megastore in Grapevine, Texas shortly after it was released.  I was just listening to it the other day, and thought that others might like to have a listen to it as well.  Sometimes, brevity is best!

So, here you are - Uilab's Fires EP, released in February 1998 on Duophonic Records (Stereolab's privately owned label).  Enjoy, and as always, let me know what you think.

Labels: 1998, Alternative, Duophonic, Electronic, Stereolab, Ui
Newer Posts Older Posts Home
Subscribe to: Posts (Atom)
Saying "Thanks" for the music you receive from here costs you absolutely nothing, and yet is worth quite a bit to me… If you can't bother leaving a comment on this blog for the first album/set we send you, don't bother making a request For a second album…