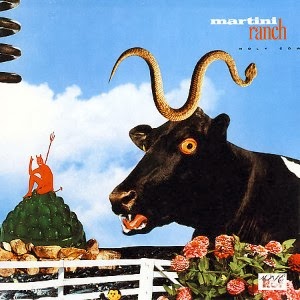 I first heard the song "World Without Walls" in 1988, listening to the old WHFS while driving through Washington, DC. I immediately recognized Cindy Wilson's voice in the chorus, and at first assumed, with no small amount of excitement, that the B-52s were recording again and about to release another album. Mind you, at that time, it had been more than two years since the B-52's last album, Bouncing Off The Satellites, released in the wake of guitarist Ricky Wilson's death in October 1985. A lot of people, myself included, assumed that with the lack of a supporting tour for that album, and the general silence of the band over the intervening years, the B-52s were finished (of course, within two years, that would turn out to be untrue . . .). So it was good to hear what I assumed were noises from that quarter.


I wasn't quick enough to catch the name of the song at the time, so it took me a while to discover that it was not a new B-52s song at all, but one by a band called Martini Ranch. Martini Ranch was started in 1982 by guitarist Andrew Rosenthal, who noodled around the edges of L.A.'s rock scene for a while until 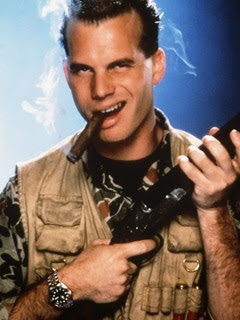 hooking up with a new friend and bandmate, actor Bill Paxton.  Yes, THAT Bill Paxton. In the mid-1980s, Paxton had been making a bit of a name for himself in movies like Stripes, Streets of Fire and, of course, Weird Science. But he wasn't really a huge name in Hollywood yet, so he split his time on both acting and musical endeavors.

The result was Martini Ranch's sole album, Holy Cow. Despite the band dragging in several of their more famous and successful music and Hollywood friends for guest appearances (including the aforementioned Cindy Wilson, members of Devo and Judge Reinhold(!)), or maybe because of it, this album is frankly kind of crap. Its sound, a sort of generic hybrid late-80s LA synth-pop, was dated about two minutes after the album was pressed. And a lot of the ideas behind the songs are too jokey, lame or half-baked. "World Without Walls" is the best song on the album, but that's not saying it's a classic.

With contributions from the B-52s and Devo (two long-time favorite bands of mine), this album should have been right in my wheelhouse. But outside of a couple of songs, it's just irritating. I think that Bill Paxton made the right decision to concentrate on acting. But here - you decide: