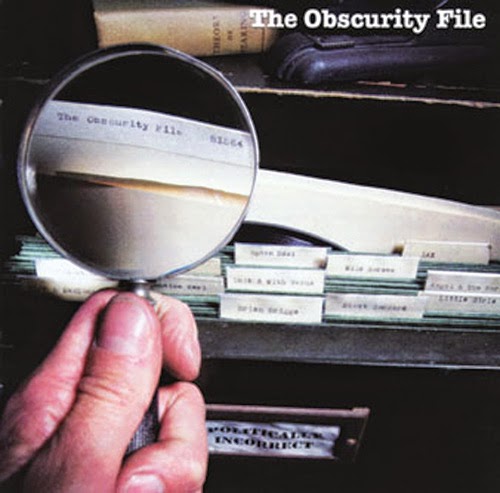 Back during my freshman year at the Naval Academy in the early '80s, we plebes weren't allowed to have radios or any sort of music or electronic devices in our rooms (this was a couple of years before incoming classes were issued with laptops, so I'm curious as to how that rule is currently enforced - if I was a plebe now, my computer would be jam-packed with .mp3s). Of course, this didn't stop the vast majority of plebes from smuggling in their newfangled Walkmans, and stashing them and their tape collections in various places in our rooms. I was no exception to this rule - a favorite hiding place was in the ceiling tiles above the bunks. By the time Plebe Year ended, I was surprised that the ceiling didn't collapse from all the cassettes I had stashed up there!

Anyway, starting in my second year in Annapolis, I made up for lost time, musically. WHFS, the local alternative station, was always on in my room (fortunately, my roommate was into that stuff as well). Later on, in the 1990s and beyond (before its untimely but predictable demise), 'HFS became more of a commercial 'modern rock' station, flogging stuff like tired grunge bands, Green Day and the like. But back in the day, the station was still fiercely independent and for the most part anti-commercial, and had DJs with the sack to play some pretty unheard-of, off-the-wall stuff that I ended up enjoying immensely. Jonathan "Weasel" Gilbert, with his nasal, high-pitched voice, was the signature DJ and most recognizable station personality. But there were other on-air individuals - like Aquaman, Mother Earth Meg, Neci and the like - whose shows I enjoyed and regularly tuned into. I would occasionally tape some of their programs for later listening.

One night, one of the 'HFS DJs (whose name I've long since forgotten) played a 45-minute nonstop bloc of some pretty outstanding stuff, most of which I'd never come across before. I taped pretty much the entire show (still have that cassette stashed away in the basement). These tunes included Iggy Pop's "Run Like A Villain" off of his 1982 album Zombie Birdhouse (in the early 80's, Iggy was then in the midst of a long career slump; one he wouldn't pull out of until 1986's Blah Blah Blah), Pylon's "Yo-Yo" . . . and this peppy little New Wave gem:


I had no idea what the name of this tune or the band was, and after that one broadcast that evening, I never heard it on the radio again. But I thought it was great, and I never forgot the song and its lyrics - "Good luck, Ronnie Reagan - save us from ourselves". I hoped one day that I would run across it once again. It was literally decades later, actually, before I dug up more info on this song.

One day a few years ago, I plugged my rudimentary remembered lyrics into a search engine, which provided me with an answer. The song was called, appropriately enough, "Ronnie's Song", by a California band called LAX.

I did a little research on the group, and found that it was formed in 1980 and fronted by Redondo Beach's Carl Pritzkat, with his brother Mike on bass and their friend Chris Holmes on drums. The band gigged around the LA area, and in 1981, shortly after President Reagan's inaugaration, released "Ronnie's Song" as a single on Michricar Music. The tune was fairly popular in the Los Angeles Basin - the legendary DJ Rodney Bingenheimer on the influential station KROQ played this song frequently during the early '80s. This major-station exposure did nothing for LAX; "Ronnie's Song" was their only release, and they quickly faded away.

Armed with this new knowledge, I made several attempts to track down this incredibly hard-to-find single, with no success whatsoever. I finally found the song on a compilation album of way-out, forgotten early '80s chestnuts called (appropriately enough) The Obscurity File. Here's the song lineup:

The album features tunes mainly by Southern California New Wave musicians, most of whom were "one-hit wonders" (the term "hit" being applied very liberally here) . . . but others who gained a little more recognition in the industry, including Angel & The Reruns (who were featured in the movie Bachelor Party; their song here is the infamous one referring to the drug overdose of Anissa Jones, who played "Buffy" on TV's Family Affair) and Scott Goddard, who used to be a member of The Surf Punks. For the most part, however, most of these songs were considered novelties, and as such were relegated to play on radio programs like Dr. Demento and late-night freakout shows . . . like the one on WHFS where I heard the LAX song so long ago. A lot of the songs here are silly, and this album post probably won't be breathlessly awaited by a majority of you. But if you find one song on here that's to your taste, you'll probably like them all. So, give it a shot, if you dare!

[And as for LAX's Carl Pritzkat, after his short career in the music industry, he went into the digital media field, founding Mediapolis in 1994. He recently joined Publishers Weekly as Vice-President of Business Development. It's good to see that music wasn't the beginning and end for him, and he's moved on and is doing well in life.]

So here for your listening pleasure is The Obscurity File, a collection of relentlessly obscure New Wave releases, put out by Oglio Records on July 19th, 1994, an album that I acquired based on the fuzzy memory of a half-recalled song heard over a quarter-century ago. Enjoy, and as always, let me know what you think.