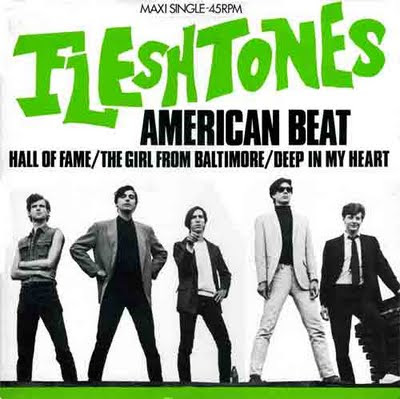 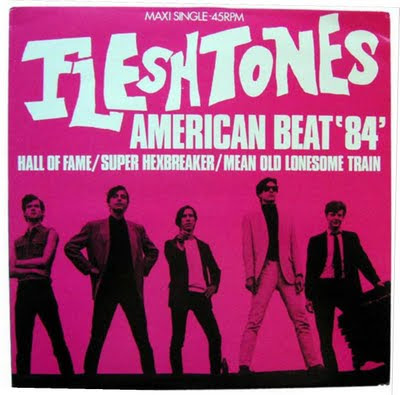 I was browsing through the online version of The New York Times back in late May, and came across an obituary notice concerning the passing of actress Barbara Stuart. Ms. Stuart had a long and varied career, for over fifty years appearing frequently on the big and small screen, but mostly in supporting roles on television. For all of her longevity, she never quite made it big. It seemed that she lived out her career as one of those "oh yeah" faces, someone who you've seen before on TV without quite remembering where, or what her name was. According to the article, her big claim to fame was appearing as Miss Bunny, Sgt. Carter's girlfriend on "Gomer Pyle, U.S.M.C.", which really didn't ring any bells with me. There was also a picture of her - she looked semi-familiar, but still not wholly recognizable.

I kept reading through her list of obscure TV series appearances, such as "I Led Three Lives", "T.H.E. Cat", "The McLean Stevenson Show", and forgettable B-movie roles in stinkers like Marines, Let's Go! and The Pterodactyl Woman From Beverly Hills (no, I'm not shitting you - that was a ACTUAL movie). The penny finally dropped for me with these words at the end of one paragraph: "She was Tom Hanks’s future mother-in-law in Bachelor Party (1984)."

YES! Of course! Bachelor Party! Tawny Kitaen's mother! She was the one who grabbed Nick The Dick's 'foot-long' ("and then some", as he quipped) in the strip club scene, a comedy classic!

I've always loved Bachelor Party. Yeah, I know - the thing was no Oscar winner; critics have called it "vulgar" and "sophomoric", descriptions I really can't argue with. And I'm sure that if you ask Tom Hanks (who appeared in an early-career leading role), I'll bet he wishes he never starred in this admittedly juvenile farce. But for a flick filled with bad acting (this movie killed dead any hopes Adrian Zmed had for a substantial movie career, dooming him to supporting roles on TV forever and anon), generic '80s movie cliches (Exhibit A: the blond Aryan preppy antagonist (a "Zabka-ite", if you will)), and a warmed-over plot line (i.e., the nerdy/weird/unacceptable guy wooing and winning the girl of his dreams - gee, they've never used THAT before . . .), Bachelor Party has shown surprising resilience over the years. The movie resists being ignored, or relegated to the dustbin of forgotten '80s 'junk' films of its genre like Just One Of The Guys, Better Off Dead or Hot Dog: The Movie.

In a way, Bachelor Party is like a minor-league Caddyshack, in terms of funny scenes and quotable lines that guys remember fondly. The "Nick The Dick" scene is a stand out (heh - so to speak); along with scenes and lines like:

- Rick (Hank's character) is enticed by his naked ex-girlfriend Tracey (played by the brick shithousedly-built Penthouse Pet Monique Gabrielle), and has a guilt trip about it (complete with the faces of a nun, his fiancee, and his friends appearing on Tracey's shoulders and counseling him);
- Gary (the nerdy guy) making a bad deal with a sinister pimp when arranging for hookers to attend the party, walking away and mumbling to himself, "I just bet my balls - and shook on it."
- "Pain . . . is SUCH a rush!"

As for the movie soundtrack, New Wave is well represented, with cuts by Wang Chung ("Dance Hall Days"), The Police ("Rehumanize Yourself") and Oingo Boingo ("Who Do You Want To Be" and the movie theme song) featured prominently. Bachelor Party does make some musical mistakes, in my opinion - the producers were obviously featuring/pushing two songs for radio airplay and chart recognition, Adrian Zmed's "Little Demon" and Angel & The Reruns' "Why Do Good Girls Like Bad Boys?". But both songs were annoying, for different reasons: Zmed's song, because it sucked REALLY badly, and the Reruns' tune because they just played it too long/too many times in the film, and after a while you just got sick of it.

The best song in the movie came early on, in the scene in the jeans shop that introduces Debbie, the main female character, played by Tawny Kitaen. In this part of the movie, the entire store (clerks and customers alike) is jamming out to a great horn-and-snare-driven Hi-NRG tune.


The whole setup is hokey and contrived, a Hollywood version of what a 'cool' New Wave clothing store is supposed to look like . . . but the song is still amazing, so much so that the first time I saw the movie, I stayed for the closing credits so I could find out the name of the song. I discovered that it was "American Beat '84", by a band called The Fleshtones.

The Fleshtones were formed in 1976 in Queens, New York when two roommates renting a house in the neighborhood, Keith Streng and Marek Pakulski, came across some musical instruments that a previous tenant had abandoned in the basement. The two recruited a couple of local friends, Manny Calderon (on drums) and Peter Zaramba (on keyboards and vocals) to fill out their new band, with Streng taking up the guitar and Pakulski on bass. Although the Ramones formed two years earlier in the same neighborhood as the Fleshtones, there wasn't much cross-pollination between the two bands - probably because the members of the Ramones were significantly older than Streng et al., and their music styles were totally different. While the Ramones pursued a purely punk path, the Fleshtones mined a sound that was more rock and power pop than anything else.

Whatever their differences to the Ramones, the Fleshtones also quickly found success on the New York club scene. They made their first appearance at CBGB's in May 1976, and became regulars at the top local clubs of that era: the Irving Plaza, Max's Kansas City and Danceteria in NYC, and Maxwell's in Hoboken, NJ. The band built up a strong local following, and expanded that fan base with club visits up and down the East Coast, making stops at places like The Ratskeller in Boston and the 9:30 Club in DC (in fact, they were the first band ever booked at 9:30).

In 1978, the Fleshtones signed with Red Star Records, recording an album's worth of material and releasing their first single, "American Beat b/w Critical List" the following year. But Red Star dicked around with the band, never releasing the album and only giving token support to the single. So in 1980, the Fleshtones left the label and signed with New Wave giant I.R.S. Records. As opposed to their previous label, head honcho Miles Copeland put the full weight of I.R.S. behind the band. He teamed them with the label's best producers (Richard Mazda and Richard Gottehrer, among others), featured them in I.R.S.'s signature concert film from that era (Urgh! A Music War), and even got the band a gig on American Bandstand in 1982. Copeland also had them rerecord their debut single, which was rereleased as "American Beat '84". Overall, this new version crushes the first one, in terms of beat, energy and overall coolness. 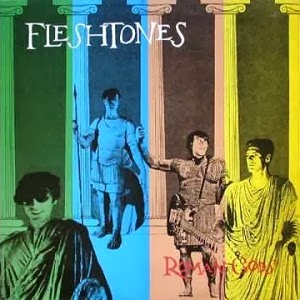 But for all of that support, all of their gigging and despite their large following, the Fleshtones couldn't find a national audience. None of the band's four albums I.R.S. released between 1982 and 1985 were hits; only the first one, Roman Gods, managed to scrape the bottom of the Billboard 200 chart. They were dropped by I.R.S. when their final label album, Speed Connection II, tanked in 1985. Since then, they have soldiered on, gigging constantly and releasing a series of albums either independently or through small labels. After 35 years, Streng and Zaramba are the remaining original members, but even with their lack of mainstream success, the Fleshtones refuse to give in. They're like the poor man's Dramarama - a band that had lots of talent, but never quite got over the hump.

Still, I'm glad they have at least one great song like "American Beat '84" in their discography. Here are the American Beat '84 EPs (both the U.S. and European versions, with similar "A" sides but different songs on the flip), released by I.R.S. Records in 1984. This tune made a movie that should have been forgettable that much more memorable (for me, at least). As always, let me know what you think.