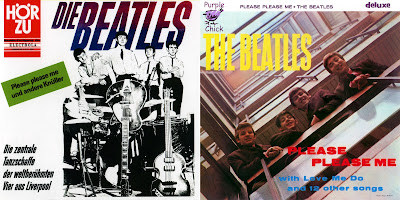 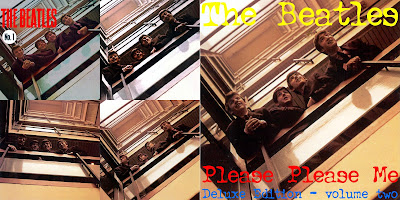 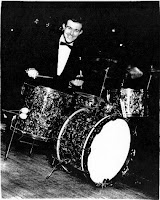 R.I.P. to British musician Andrew White, who died on Monday, November 9th at the age of 85. Beatles aficionados know of Andy White as one of many "Fifth Beatles", although his claim to that title is more secure than other would-be pretenders: he was the session drummer who infamously was called in to replace Ringo Starr on the kit during the recording of The Beatles' first single, "Love Me Do".

White began drumming literally before most of The Beatles were even born, and by the mid-1940s, before George Harrison had started primary school, he was working as a professional session drummer. In the late 1950s, he formed a big-band outfit that was good enough to take across the Atlantic; his group toured the Eastern Seaboard of the U.S., sharing bills with early American rockers like Bill Haley and Chuck Berry. Quickly seeing where the future lay, White abandoned his big band shortly 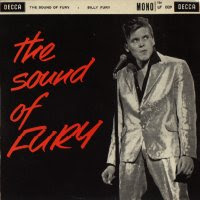 thereafter, and more and more began working with members of the nascent British rock scene. In 1960, he served as drummer for Billy Fury on his debut album, The Sound of Fury, credited as the first authentic English rock 'n' roll album. By the early '60s, White knew both his craft and his way around the rock genre.

The Beatles, recently signed by Parlophone, went into EMI Studios in London in early September, 1962 to record sides for their debut single, scheduled for release later that fall. The band had prepared six songs for eventual selection as A/B sides, including "Love Me Do", "Please Please Me", and a lightweight Adam Faith-penned song called "How Do You Do It?" (a hit the following year for Gerry & The Pacemakers). At that point, the band's producer George Martin had little confidence is his new charges' songwriting abilities, and for that reason was pushing for "How Do You Do It?" as the debut A-side. But Martin began showing interest in "Love Me Do", mainly due to the wailing harmonica played by John Lennon, a sound that had featured on several British hits that year, including Bruce Channel's "Hey Baby" and Frank Ifield's "I Remember You". After recording both songs, and after much deliberation, the decision was made on September 4th for "Love Me Do" to be the lead single.

However, Martin was dissatisfied with Starr's drumming on the September 4th recording, considering it to be not as "tight" as he would prefer. A rerecording session was scheduled for a week later; Martin was going to be absent from the studio, so assistant producer Ron Richards was placed in charge of the session for that day. The weekend prior to the session, acting on Martin's orders, Richards quietly contacted Andy White and requested that he attend the upcoming Beatles session (George Martin had used White as a session musician several previous times in the early 1960s, and was thoroughly familiar with his style and professionalism).

So Ringo and the band were taken by surprise when, on September 11th, they arrived at EMI to find White behind the drum kit. But Starr took it like a man; as Richards recalled later: "He just sat there quietly in the control box next to me . . . Ringo is lovely—always easy going" [Richards' memory was in error - during the recording, Ringo was out on the floor with the band, but was relegated to playing the tambourine].

Though he appeared to hide it well, needless to say Ringo WAS disappointed, recalling later:


"On my first visit in September we just ran through some tracks for George Martin. We even did "Please Please Me". I remember that, because while we were recording it I was playing the bass drum with a maraca in one hand and a tambourine in the other. I think it's because of that that George Martin used Andy White, the 'professional', when we went down a week later to record "Love Me Do". The guy was previously booked, anyway, because of Pete Best [the band, with Best on drums, had recorded a version of the song during their EMI Artist Test session earlier that year in June that Martin was also dissatisfied with]. George didn't want to take any more chances and I was caught in the middle. I was devastated that George Martin had his doubts about me. I came down ready to roll and heard, 'We've got a professional drummer.' He has apologised several times since, has old George, but it was devastating — I hated the bugger for years; I still don't let him off the hook!"

With the Andy White version of "Love Me Do" in the can, work then immediately commenced on the B-side, "P.S. I Love You". White also drummed on that, with Ringo again playing a backup role, shaking maracas in the background. 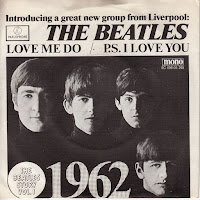 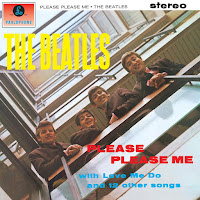 Most of The Beatles' subsequent albums that included the song used the White version (a simple way to distinguish between the two is that White's version features Starr on tambourine; there is no tambourine on Starr's version).

For his labors at the studio that day, Andy White received a grand total of 10 pounds as payment, plus an extra 50 pence for bringing his drum kit. He received no royalties from, nor credit on, the recording. It was the first and last time White ever worked with the band, but it was enough to get him in the history books as the first "fifth Beatle" whose contributions made it onto an official recording during the band's active life.

White remained a session drummer for the remainder of his career, playing with the likes of Herman's Hermits and Anthony Newley. He did participate on other hit records, most notably drumming on Tom Jones' 1965 smash "It's Not Unusual". He ended up on the cabaret and backing band circuit until his retirement in 1975. In the late 1980s he moved to the U.S.; he married and settled in New Jersey, where he lived until his death, teaching music and working for regional pipe band associations.

In commemoration of Andy White's life and the small but important contribution he made to the early Beatles' sound and subsequent legend, I proudly offer Please Please Me (Deluxe Version), compiled by the good people at Purple Chick in 2006. This two-disc set includes mono and stereo versions of songs on the album, along with various takes of selected tunes. As an added bonus, I've included both the Ringo version of "Love Me Do" and the Pete Best version as well. The latter went missing for years and was assumed lost, but was tracked down in the EMI archives and included in the 1995 Anthology 1 set. See if you can spot the differences in each of the three versions!

Enjoy, and as always, let me know what you think. And on behalf of the band (including Ringo) and Beatles fans the world over, let me say thank you once again, Mr. White.