The Beatles - Strong Before Our Birth (Purple Chick) (2-disc set) 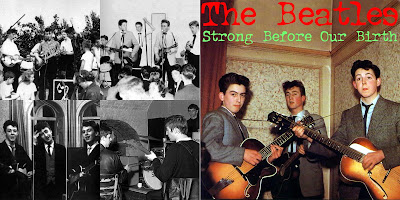 Sixty years ago today, on a warm but cloudy Saturday afternoon at a church fair in a suburban town in the North of England, two teenage boys met for the first time . . . and the history of music was forever changed.

Yes, today is the diamond anniversary of the fabled first (well, perhaps not*) meeting of John Lennon and Paul McCartney at the St. Peter's Church garden fete in Woolton, Liverpool. I will refrain from retelling the oft-told tale of how the two famous musicians and songwriters came together that day - there will be plenty of stories in that vein today. So I'm going to keep this posting short.


However, I will call attention to one of these articles, which deserves recognition and merit - a write-up in today's Daily Beast about the momentous day, written by my good friend and Beatles fanatic Colin Fleming, that's worth your time and attention.

To commemorate this momentous day, I proudly present to you the Beatles' Strong Before Our Birth Purple Chick two-disc set, compiling the best and most important existing recordings from the band's early years (1957 to 1962) (The non-Purple Chick bootleg Complete Home Recordings 1958-1962 contains a couple of different tracks: mostly long, meandering 15-20 minute guitar noodlings of limited import and interest). This set contains mostly recordings of practices and jam sessions held at McCartney's bedroom at his family home, 20 Forthlin Road in Liverpool, along with some early Cavern Club recordings and 1958's "In Spite Of All The Danger", the pre-Beatles first professionally recorded original song.

These discs also include fragments of selections played by The Quarrymen on the very night of John and Paul's meeting - as fate would have it, one of Lennon's schoolmates, Bob Molyneux, was on hand with his new Grundig reel-to-reel machine, making recordings of all the bands playing that night's Grand Dance. Molyneux ended up with several reels of taped music, which he stored away and all but forgot about until decades later. By that time, many of his tapes had gone missing or were destroyed, victims of house moves and time. But luckily, the one surviving reel he salvaged was the one containing the first recordings of John Lennon performing in public. It's not the highest fidelity recording, but it's unmistakably John's voice.


Here's the track listing for both discs: 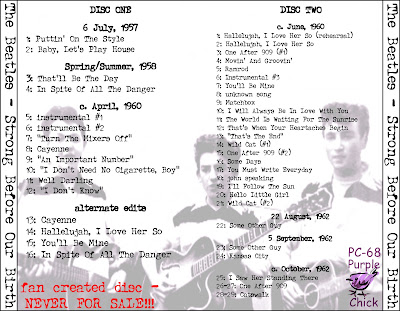 Anyway, here you are - check it out, and let me know what you think. Happy Beatles Day!

* In Beatles expert Mark Lewisohn's recently published bio of the band's early years, The Beatles: All These Years, Volume One – Tune In, he mentions that on numerous occasions in recent years, McCartney has spoken of seeing Lennon in and around Liverpool several times prior to 1957 - riding on buses with him and the two crossing paths while Paul was on his paper route. McCartney even mentions speaking with him once or twice during those years, in front of local shops. But as there are no independent eyewitness accounts of these encounters, nor any definitive dates or times when they occurred, we'll stick with July 6th, 1957 as Day One.