Thanks (half) a million! 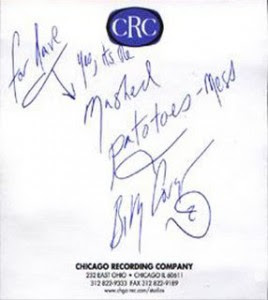 Sometime later today, I anticipate that this blog will cross the 500,000 visitors threshold.  I find it simply amazing that so many people have found their way to my site over the past eight years! For all of you who have read my rambling stories here about the music and events which have shaped and affected my life, I hope that I have interested, entertained and (possibly) enlightened you... and in the process you've come away from here with some great tunes to boot. I've appreciated all of the requests and comments received from you all over the years - I look forward to more in the coming years! Thanks for spending some time in my little corner of the Web!

And a special "thanks" to the many, many visitors who, through this site, have become my good friends and correspondents during this time - Dexter, Adrian, Jonder, Nick, Sean, Colin, and so many more; you all are the best!

To celebrate this upcoming milestone, I thought that over the next couple of days I'd post a couple of things that I think the masses will be interested in, but without one of my usual long-winded screeds attached to them. Presented au natural... well, as au natural as I can make them!

Here's today's offering: Smashing Pumpkins' Mashed Potatoes bootleg box set. This was a 5-disc collection of live and demo tracks from the band's voluminous archive that band leader Billy Corgan put together for a small group of friends in the early 90’s. The 76 tracks cover the Pumpkins from the years 1988-1993.


Mashed Potatoes is a 5-disc box set containing many rare and unreleased Smashing Pumpkins songs, including: early compositions from 1988-90, Gish and Siamese Dream outtakes and demos, live covers and originals, a couple of interviews, and live stage banter.

Billy gave Mashed Potatoes to a few of his friends, band members and management as gifts - allegedly for Christmas 1994.  The number of copies pressed range anywhere from 5 to 10, depending on the source; 9 is the number most often mentioned.

...As the story goes, D'Arcy's copy of the box set was stolen around February 1995, and the thief attempted to sell it to a local record store. Even though the thief originally asked for $500, it was eventually sold to the store owner for $50, for the owner said he wouldn't pay that much for "home made shit." Judging from the short amount of time the store owner had possession of Mashed Potatoes (about 24-48 hours) and the fact that he did not realize what it was, it is believed that the store owner did not make any copies.

A few tracks from the stolen copy were put online in the late 1990s, but it wasn't until late 2002 that the entire set was leaked onto the Internet. Here's the track lineup:

So, in honor of my 500,000th visitor to this site, I proudly offer as a "thank you" to you all Mashed Potatoes, the Smashing Pumpkins internal "bootleg", compiled in December 1994. Enjoy, and keep on comin' back! And as always, let me know what you think.