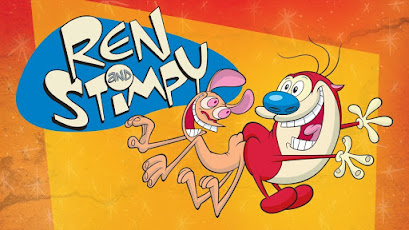 I watched the new documentary Happy Happy Joy Joy: The Ren & Stimpy Story earlier this week, an amazing, thrilling, hilarious and ultimately deeply disturbing chronicle of the rise and fall of the groundbreaking and beloved 1990s Nickelodeon cartoon and its creator, John Kricfalusi. Here's the trailer for it:

If you're an old fan of the show, I heartily recommend you see this film. I won't give anything away here, other than to say that it will jolt you to your core... but hopefully not enough to displace your fond memories of this program.

I distinctly recall the first time I ever saw Ren & Stimpy. I moved to the Washington, DC area during the summer of 1991, and soon afterward acquired a new girlfriend. During the first weekend we hung out together that fall, she insisted that we get up to watch this manic new cartoon airing on Nicktoons... it was the "Space Madness"/"The Boy Who Cried Rat!" episode, and by the end of it, I knew that I had just seen one of the greatest cartoons of the age.  From then on, I watched the program religiously every weekend, absorbing multiple viewings of the same shows (Ren & Stimpy's production company, Spümcø, was notorious for missing delivery deadlines, leaving Nickelodeon no choice but to air the same episodes over and over again as a stopgap), and loving every single one of them.

As I mentioned in a previous blog posting, one of my all-time favorite Ren & Stimpy episodes is "Rubber Nipple Salesmen", containing what has to be the most disturbing, off-putting - and yet, hilarious - scene EVER included in what was ostensibly a children's cartoon:

By the start of the second season, it was all over. Nickelodeon fired Kricfalusi in September 1992 (for several valid reasons, in my opinion - see the documentary film for details), and Spümcø completed the slate of remaining shows written or directed by Kricfalusi before production of the show was moved by the network to Games Animation. Ren & Stimpy aired for another three seasons, into 1995, but without John K.'s imagination and energy behind it, the later-period episodes were little more than pale echoes of the show in its heyday. 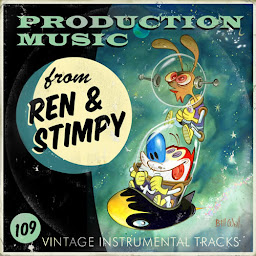 A lot of what made this show great was in its liberal use of vintage "incidental music" from the 1950s and 1960s, that gives every cartoon a certain "throwback" tone to some of the classic animation and studios from that era. Way back in 2006, a great site called Secret Fun Blog and its compiler Kirk D. went the extra mile, and began offering compilations of music from Ren & Stimpy.  To quote from his superb post:

Put simply, these melodies have enriched my life. Play them on your drive to work and you're the star of an instructional traffic safety film, turn it on during dinner and mealtime becomes 80% happier (but be careful.. play the wrong track and you could wind up with a touch of Space Madness). Best of all you can listen and imagine that you live in the world of Ren and Stimpy where the walrus-napping horse is your next door neighbor, where the toy stores are stocked with Log from Blammo, and a visit from Powdered Toast Man is just a complaint away! 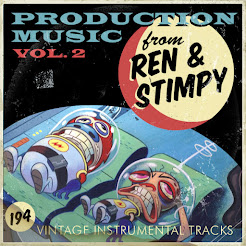 The links to Volumes 1 and 2 of this great collection have long been dead on his blog... but fortunately, I took the opportunity at the time to acquire this outstanding music. There was also a THIRD volume of tunes from this show released during that time... this comp was a little harder to track down, and 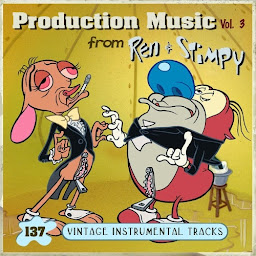 even harder to sort out, since most of the tracks came without track numbers or composer attribution. But I took care of that, to the best of my ability, utilizing various authoritative sources. So what you have here for Vol. 3 is about as complete as you're going to find out there.

Comedy Central announced earlier this month that it had greenlighted a reboot of Ren & Stimpy, featuring all new episodes, for the upcoming season, to air alongside rebooted versions of old 90s cult hit shows like Daria and Beavis & Butthead. My personal feeling on this is that they should just leave it well enough alone.  These shows - especially Ren & Stimpy - were of a certain time and place in the past, and fondly remembered by those of us lucky enough to see them when they first emerged. Ren & Stimpy (at least the first two seasons) was lightning in a bottle, and attempting to recapture that is a foolish and futile exercise - especially so when John Kricfalusi, the creator and lead animator of the original series, is slated to have no involvement whatsoever in the reboot.  Just let it go, Comedy Central - stop trying to "reanimate" the corpse, as it were.

Enough of that.  Here for your listening pleasure are all three fan-assembled volumes of music from this seminal cartoon, released between 2006 and 2008.  I hope that this post brings you plenty of "Happy Happy, Joy Joy!"

(And as always, let me know what you think.)

Add comment
Load more...
Older Post Home
Subscribe to: Post Comments (Atom)
Saying "Thanks" for the music you receive from here costs you absolutely nothing, and yet is worth quite a bit to me… If you can't bother leaving a comment on this blog for the first album/set we send you, don't bother making a request For a second album…