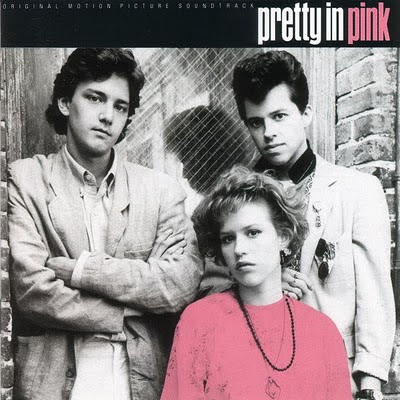 This post isn't so much about what's on the Pretty In Pink soundtrack - it's about what's NOT on it, and my search for these songs. As such, I'm not posting the entire soundtrack here - if you want it, check out my fellow blogger Babakazoo's Classic Groove's posting from a little while back.

I'll start by saying that yeah, back in 1986 when it came out, I liked this movie. Seems now that in this day and age, it's sort of a crime to admit that you are/were a fan of John Hughes movies in the '80s. A lot of over-35 hipsters like to adopt the pose that, back in the day, they were above these types of films. Let me disabuse you of any notion to the contrary: they're lying - back then, there was hardly anyone who wasn't a fan of John Hughes movies, and John Hughes teen movies in particular. I mean, let's face it - in less than a four-year span, Hughes either wrote, produced and/or directed the following films: National Lampoon's Vacation; Sixteen Candles; The Breakfast Club; European Vacation; Weird Science; Pretty In Pink; Ferris Bueller's Day Off; and Some Kind Of Wonderful. That's a killer run by any measure, with something in there for pretty much everyone in the family. So to say that you were oblivious to or "anti-" Hughes' ouevre is just patently false posturing. True, the guy splashed a few late-80s turds into the bowl (She's Having A Baby, anyone?). But he proved he still had a lot left in the tank with his first film of the '90s, Home Alone, after twenty years still one of the all-time top grossing movies.

Enough about Home Alone - we were discussing Hughes' teen angst films, and Pretty In Pink in particular. I'm not going to bother rehashing the plot or discussing the characters or anything - I'm sure you know the movie by now, else you wouldn't be reading this. I'm more interested in the music.

One thing you had to hand to Hughes - the guy knew how to cobble together movie music, mixing cuts from the current hot alternative bands from that time (New Order, The Smiths) with classics from the '60s and '70s (Otis Redding, The Rolling Stones, The Beatles) into an eclectic, ear-catching stew that somehow all fit together as a coherent complement to the story. As his career progressed, Hughes got better and better at this; the music underlying The Breakfast Club is better than that for Sixteen Candles; Ferris Bueller's music surpasses that of Pretty In Pink. I think that Hughes' movie soundscapes peaked with Some Kind Of Wonderful, full of great new songs and interesting reworkings of classic songs by some (for their time) cutting-edge artists (Flesh For Lulu, The Jesus & Mary Chain).

The Pretty In Pink movie music is probably the most balanced of these song collections, in terms of old and new stuff. However, there's a difference between the music you actually HEAR in a movie and what is actually RELEASED as the 'official soundtrack' to the film. And that's where I feel the Pretty In Pink Soundtrack failed. Great songs that were an integral part of the film - like Duckie's dance interpretation of "Try A Little Tenderness", and Andie slow-dancing to "Cherish" with a beehive-topped Iona - were left off of the soundtrack album. At the same time, lightweight tunes by Jesse Johnson and INXS were included. But the most egregious omissions were yet to come . . .

Some of the best music in the movie took place in the club scenes, a place called CATS (Andrew Dice Clay played the club doorman). There were two pretty obscure bands featured at CATS: The Rave-Ups, who played excerpts of "Positively Lost Me" and "Rave Up/Shut Up", and Talk Back, which did a very cool neo-reggae tune called "Rudy".


I remember seeing the movie, hearing that song, and thinking, "Who the heck was THAT?" In the days that followed, I eagerly acquired the soundtrack album, fully expecting the coolest songs in the film to be part of that release. But I was profoundly disappointed when I saw that the studio did not see fit give these unknown bands a break by putting them on the disc.

It took me a while to find the Rave-Ups songs, but I ended up tracking them down. Fron what I understand, members of the Rave-Ups were personal friends of Molly Ringwald, and she used her influence to get them into the film (which was cool of her). The Talk Back song, however, proved more elusive.

Talk Back was a straight-up bar band from the Los Angeles area, one of thousands in LA working the circuit and hoping for a break. The band was fronted by Bruno Coon, who word has it is one of the nicer guys in the industry (and you know what they say about nice guys, and where they finish . . .). By all indications, Talk Back's inclusion in Pretty In Pink did nothing for them. The band soldiered on for a few more years, until evolving into Headbone - a new name, but essentially the same sound, fronted by the same guy. It appears they're still making music - the band have a MySpace account, which is updated from time to time. Coon appears to supplement his band income with fairly regular work as a music editor and composer for movies (most recently serving as an editor on this year's Toy Story 3).

Enough about the band background. As for the song, like I said, I searched high and low for "Rudy", to no avail. I have had my antennae up for this one for almost twenty-five years, and it was just last week, by happenstance, that I finally stumbled over a copy of it. Mind you, this is not the original version of "Rudy" taken directly from the film; this is a live version by Talk Back/Headbone recorded at some bar much later. But it still sounds very close to the original.

So here are the three songs that SHOULD have been on the Pretty In Pink Original Motion Picture Soundtrack:

(and BTW, just to put my own two cents in: I'm not Calvin Klein, but I gotta say that the dress Andie made and wore to the prom in the film is HIDEOUS . . .)