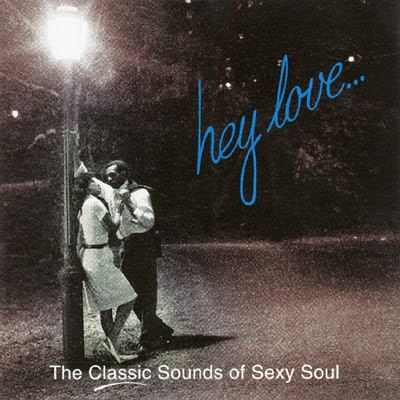 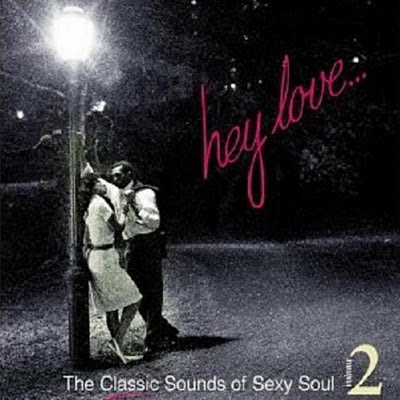 This collection of great R&B hits from the late '60s/early '70s is probably known more for its now-classic 1970s television commercial and its immortal closing line, "No, my brother - you have to buy your own!" Here's the ad, just in case you don't remember it:

I probably saw this TV commercial scores of times in the late '70s and early '80s, when they were running it at practically every late-night ad break on UHF stations like WLVI (Channel 56) in Boston and WBFF (Channel 45) in Baltimore. A weird combination of late Seventies cheesiness and slickness, this ad is a bonafide masterpiece.

The Hey Love compilation was released by a company called Onyx Communications out of New York City (according to the commercial, in partnership with "Hey Love Productions") sometime in either 1977 or 1978 - documentation is pretty scarce for this release. Back then, you could only order the album on either vinyl or cassette, via the standard shady-looking P.O. address in some jerkwater town most people had never heard of. Onyx Communications was obviously just the middleman in this deal, and apparently the release of Hey Love was the high point for this company - on a whim, I looked up company information on this firm, and only came up with the following:


"Onyx Communications Inc is a private company categorized under Communications and located in New York, NY. Current estimates show this company has an annual revenue of less than $500,000 and employs a staff of approximately 1 to 4."

Looks like they had to let a few people go over the years. Shoulda hung on to some of that mail order record money . . .

Anyway, after a few years, the ads disappeared from the airwaves, and the albums became unavailable. However, in 2001, Time-Life Music acquired the license, and reissued Hey Love on two CDs. For all the jokes about the corniness and stilted dialogue of the commercial, that doesn't take away from the fact that this is an outstanding soul/R&B compilation. These discs focus on a narrow time period, approximately from 1966 to 1973, ostensibly the heyday of American soul music. Every one of the forty songs on Hey Love were Top 40 R&B hits during this period, with many of them crossing over and becoming mainstream hits as well.

These are the kind of songs I remember my folks listening to, way back when. My dad used to have stacks of 45rpm records in the cabinet of his Telefunken, and if company came over or if the mood struck him, he would spin record after record on the stereo turntable - memorable stuff like The Stylistics' "Betcha By Golly, Wow", or "Have You Seen Her" and "Oh Girl" by The Chi-Lites, and "Me And Mrs. Jones" by the immortal Billy Paul. EVERY song contained on both volumes of Hey Love is a stone-cold classic.

If you know nothing about the late Sixties soul scene, these records are the perfect place to begin your education. "Not sold in any store, this exclusive TV offer is available only here!" So, pick up your copy of "the classic sounds of sexy soul", my brother - you can "get your own" right here! Enjoy: