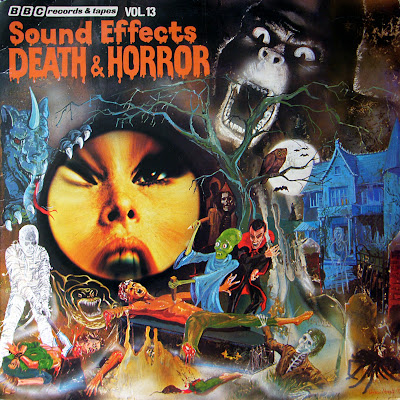 I suppose that it's that time of year again, when I post whatever Halloween-related madness I have in my library. Here's the latest entry, BBC Sound Effects Vol. 13: Death & Horror.

In the 1970s, the British Broadcasting Company released a series of over forty sound effects records for the general public, all with very specific focuses and themes - everything from crowd noises to bird songs, farm sounds, aircraft, ships and boats, explosions, the noises related to various countries - you name it. Most of the sounds on these recordings were culled from the BBC's extensive library of sounds used for their radio, TV and film productions, an absolute gold mine for this type of release.

As denoted by the volume number, this release was the thirteenth in the series. A studio radio producer named Mike Harding was tasked with putting this effects album together. He pulled a lot of stuff from the BBC's Effects Library and Radiophonics Workshop, but a lot of the sounds on this record are (were) 'brand-new', and specially recorded for this release. This album is broken up into six sections, each containing sounds linked to particular themes:

For a full breakdown of the specific sound effects in each section, I've included the notes from the back of the album: 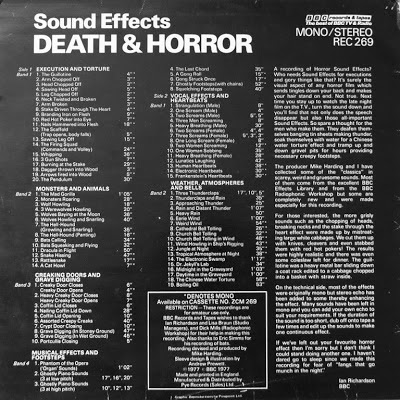 I honestly can't recall where or when I got this album - I'm sure I downloaded it from somewhere years ago, possibly by request from an acquaintance hosting a Halloween party . . . because I personally have never used it for anything like that. It's not an album you want to sit around the living room with and listen to all the way through. But with that being said, this album is perfect atmosphere for your neighborhood haunted house this October 31st, guaranteed to put the creeps into any costumed kid who comes walking up your driveway!

So, for your listening pleasure, here's BBC Sound Effects Vol. 13: Death & Horror, released in 1977 by BBC Records & Tapes and distributed by Pye Records (Bowie and the Kinks' first label). Enjoy, and as always, let me know what you think: