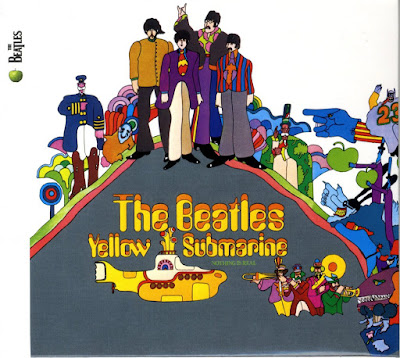 (Seems like I'm writing more and more of these "tribute" posts nowadays . . .) 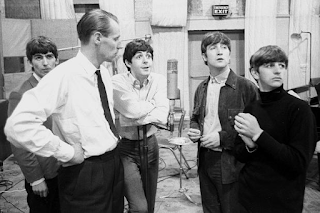 I was sorry to hear this morning of the death of Beatles producer Sir George Martin at age 90. The man was quite possibly the most famous record producer who ever lived . . . but he was more than just a guy working the mixing board controls behind the glass. Martin was a true collaborator with the group, helping John, Paul, George and Ringo hone and polish their sometimes rough and sketchy ideas and musical doodles into the legendary Beatles hits we all know and love. Without George Martin's influence, support and quiet guidance, there would BE no Beatles.

My words of respect for Martin's work and my regret at his passing will no doubt be inadequate . . . so I'll enlist some assistance. My friend, the writer and Beatles expert Colin Fleming, penned a piece for Rolling Stone earlier today in remembrance of Mr. Martin - it superbly and succinctly sums up the man's life and the nature and importance of his interactions with the most influential rock band of all time. Check out Colin's article here.

I can't add much more to that, so I'll leave you all with this: The Beatles' Yellow Submarine, the soundtrack album to the animated film of the same name, issued by Apple Records on January 13th, 1969. In addition to the previously released songs "Yellow Submarine" and "All You Need Is Love", this album includes four other Beatles tunes of second-rate quality that the band admittedly put minimum effort into, to satisfy their contractual obligation of United Artists for new music to use in the film (still, you've got to admit - "second-rate" Beatles music is still pretty doggone good).

The last half of the album is a re-recording of the incidental orchestral music used in the film, composed by George Martin himself. At first listen, the Martin songs seem lightweight and out of place on this disc. But further listening reveals hidden gems and surprises Sir George placed in his music, like his references to other Beatles songs (for instance, "Sea Of Time" briefly and quietly quotes "Within You Without You") and tucking in nods to works by Stravinsky and Bach.

Since its release, Yellow Submarine has generally been slagged by critics as a "meh", mostly inconsequential album, and it really isn't considered a major or important addition to The Beatles' overall canon, due to the inclusion of older and/or "filler" material like the Martin orchestral tracks (Magical Mystery Tour is another Beatles release that gets slammed for similar reasons). Some have gone so far to say that this album would have made a superb 4-song EP, with the other songs left off entirely or perhaps relegated to a separate release.

But I think by now that the Yellow Submarine album, as it is, has been with us so long that most people are sort of used to the juxtapositions inherent within it. For example, I recall how 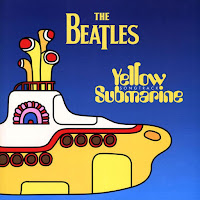 appalled I was when Yellow Submarine Songtrack was released in 1999 - the album was being promoted as a remixed "movie soundtrack" album, when in actuality it was little more than a compilation of Beatles music from that period. It just looked like a crass Beatles money-grab . . . plus, it just didn't sound "right" - like the Yellow Submarine album I grew up with. I own Songtrack, but I rarely if ever play it. For good or ill, warts and all, I'm sticking with the original album, if only to hear George Martin's music which can be found nowhere else. And I don't think I'm alone in that attitude; in regards to Yellow Submarine, David Gassman at PopMatters magazine wrote: "No matter how you get them, though, the otherwise unavailable songs on this album ought to be part of any thinking Beatles fan's collection."

Yup - I agree wholeheartedly. And I KNOW you're ALL thinking Beatles fans. So, here ya go. Enjoy this version of the original Yellow Submarine (remastered and reissued on September 9th, 2009), and as always, let me know what you think.