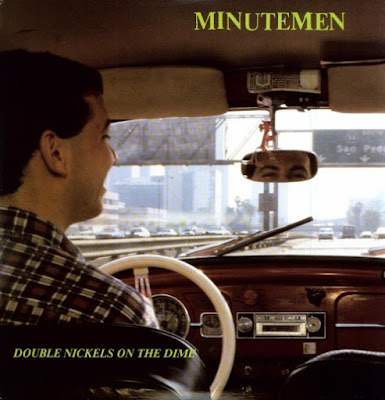 Dennes Dale "D." Boon of The Minutemen died thirty years ago today, on December 22nd, 1985. It is truly hard to fathom that it's been that long. 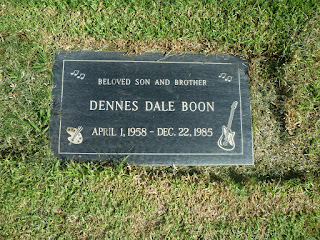 The first Minutemen song I ever recall hearing was "Political Song For Michael Jackson To Sing". I was listening to WHFS, the local alternative station, in my dorm room at Bancroft Hall shortly after the beginning of my youngster (sophomore) year at the Naval Academy in the fall of 1984 when this tune came on:


I don't know what it was about that song that grabbed me; was it the chugging melody? The plaintive, stop-start vocals? Or one of the few lyrics I could make out, "We'd cuss more in our songs and cut down the guitar solos" - followed immediately by a cheeky guitar solo? I didn't know much about The Minutemen prior to 1984; the little I'd heard about them was that they were "just another" California hardcore punk band, which formed my generally negative impression of the group before I'd ever heard a single note of their music. But hearing this weird, complex, melodic, funny song on the radio was a revelation, and completely turned my mind around regarding this band. That weekend, I made my way to Oceans II Records downtown and purchased the cassette version of the album this song was on, Double Nickels On The Dime.

Based upon what I knew of the band's history, I was a little concerned about what I would find on this album. Guitarist Boon and bassist Mike Watt were childhood friends, having met at the age of thirteen in San Pedro, California in 1971, after Watt's military officer dad was transferred to the area from Maryland a couple of years earlier. They started playing music together while still in junior high, playing rock covers and the like until their last year of high school, when they got into punk. The due began writing their own songs, and formed their first punk band, The Reactionaries, in 1978. When that group broke up eighteen months later, Boon and Watt formed Minutemen, with their former drummer from The Reactionaries, Ed Hurley, joining them a few months later. 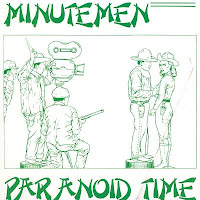 The Minutemen began releasing records through Long Beach-based SST Records; their first EP, Paranoid Time was out before the end of 1980. Their first effort on vinyl completely lived up the the "loud/fast/hard" punk ethos - Paranoid Time blasts through its seven songs in six and a half minutes, and for the most part the tunes are what you would expect - abrasive guitars, thrashing drums, shouted vocals, everything at top speed. The disc was a minor hit in punk circles, quickly selling out its initial 300-copy pressing. Impressed, SST label head Greg Ginn invited the band to record a full-length album the following year. The Minutemen went into the studio for a single late-night session in the late summer of 1981 and laid down The Punch Line, which was released in November 1981. 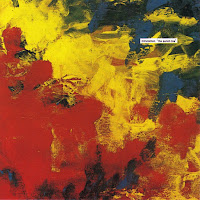 Like their debut EP, The Punch Line is notable for the brevity of its songs; the album blazes through eighteen songs in fifteen minutes, with no song running longer than a minute and a quarter. But what's also notable about this release is the remarkable musical development of The Minutemen in the few short months since their first release. There's still some thrashing and shouting on this album, but some songs are melodic, tuneful in almost a prog-rock, free-form jazz sort of way. For instance, check out this song, "The Struggle":


I think that, despite their immersion in the early California punk scene (they were huge Black Flag and Flesh Eaters fans), a lot of what influenced The Minutemen's music came from their time as a rock covers band, playing music from groups they admired like Steely Dan, Creedence Clearwater Revival and Alice Cooper. Of course, coming out openly and admitting that they liked bands like that would have drawn the ire and opprobrium of their rabid punk fan base. So in a sense, Watt, Boon and Hurley "camouflaged" this rock/pop aesthetic with enough punk-y bells and whistles to be palatable for their crowd.

The Punch Line was the first Minutemen release that got some serious notice by the mainstream rock press, many of whom recognized early on that this was no ordinary punk band. The band continued to garner critical praise with their second full-length album, What Makes A Man Start Fires?, released in January 1983. All of this set the stage for their magnum opus, Double Nickels On The Dime. 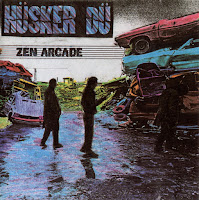 Like I said above, at the time I purchased this album I didn't know a lot of details of the band's early history that I noted above. I knew that they were on SST, home of Husker Du, another California hardcore punk band. I'd heard a couple of cuts from the latter band's Zen Arcade (released on the same day as Double Nickels) and frankly, they weren't to my taste. So I still thought I was screwing myself over by purchasing an album based on my impression of a single song. As it turned out, I couldn't have been more wrong - Double Nickels On The Dime is a fantastic album, the definitive expression of what The Minutemen were all about - eclectic, thoughtful, tuneful, sharp, funny, introspective. As good as "Political Song . . ." was, there were plenty more on this album that struck my fancy. But probably my favorite tune here is "History Lesson, Part II", where D. Boon sings about how the band came to be, and specifically about his relationship with his band mate and friend Mike Watt:


The first line of this song, "Our band could be your life", is now iconic, along with "Punk rock changed our lives." "History Lesson, Part II" is an ode to a scene that was fast disappearing (in many ways, the release of Double Nickels marked the beginning of the end of the scene the band came up in. According to American Hardcore: A Tribal History author Steven Blush, this album (along with Zen Arcade), was "either the pinnacle or downfall of the pure hardcore scene."). Bands like Black Flag also began to ignore the rigid rules of their genre, and move away more and more from the thrash-and-bang sound. "History Lesson, Part II" is also one of the best friendship songs ever written - Mike Watt wrote the song as a tribute to D. Boon, but Boon ended up singing it and conveying his respect and affection for his old friend back at him.

Double Nickels On The Dime was met with near-universal acclaim upon its release - influential Village Voice critic Robert Christgau gave the album an "A-", then later admitted he underrated it. Even the critics and publications who didn't fully appreciate the disc at the time have made an effort in following years to rectify their error - Rolling Stone originally gave it 3 1/2 stars, but when it was re-reviewed in 2004, the magazine upgraded the album to "classic" status, a full five stars. Even with all of that, Double Nickels wasn't a huge seller; in its first year, only about 15,000 copies were sold (including the one I bought). That wasn't too shabby a result for for an indie band, but not enough to get you onto the Billboard 200. Still, to this day, the album remains The Minutemen's best selling record.

Even with all of the critical acclaim and their relentless touring in support of their record during 1984 and 1985, The Minutemen and its members weren't exactly household names in 1985. So D. Boon's death in a car accident that December wasn't big news in a lot of quarters. I was fairly plugged in to what was happening in the music world then, so I heard about it the day after it occurred, while I was home on Christmas vacation. From what I understand, Boon was sleeping in the back of a van being driven by his girlfriend through Arizona when the rear axle suddenly broke. The van immediately lost control and rolled off the side of the highway; Boon was thrown out the rear door and broke his neck, killing him instantly.

When I got the news, I got the same weird feeling in the pit of my stomach that I'd had a couple of months earlier, when I learned that The B-52's Ricky Wilson had also died unexpectedly (reportedly, at the time, of "cancer"; it was much later that it was revealed he had perished of AIDS). It was odd and sad to see musicians like these at the top of their game succumbing at such early ages to illnesses and accidents. D. Boon had a lot left to offer the music world; Double Nickels was only the band's third album. With every release they were expanding their melodic focus; it would have been cool to see where The Minutemen would have gone, had Boon remained alive.

But all in all, that feeling of loss I had was shared with very few others, just folks who knew and loved the band. The nearest analogy I can think of regarding the reaction to D. Boon's death was when guitarist Dimebag Darrell was shot and killed on stage in Columbus, Ohio in 2004. In certain quarters, Dimebag was a legend, the exciting and innovative musician behind Pantera and Damageplan. But I'll be willing to bet that the average man in the street had little if any idea who Dimebag Darrell was on the night of his death, why he was so important to music, and why his fans reacted with an outpouring of genuine despair and grief at his passing. To most people, he was "just another metal guitarist" . . . just as D. Boon was "just another punk rocker". But they were both much more than that, as understood by their true fans and supporters, and the music world lost something interesting and special with their passing.

Thirty years have now gone by, and for the most part, the memory of D. Boon has faded from general knowledge. But for a few, who still revere the legendary music that The Minutemen left behind, the spirit of Boon still endures. After a period of depression and seclusion in the wake of Boon's death, Mike Watt and Ed Hurley resumed their music careers, first in fIREHOSE, and later with other bands and their own solo work. They are still the keepers of the old band's flame, and in interviews wax nostalgic over the sounds they made together with their long-lost friend. Even after all these years, Watt still calls Double Nickels On The Dime "the best record I ever played on." Damn straight.

I was planning on writing a more in-depth history of the band and their music (especially this album) and a fuller account of the life and death of D. Boon here, but it's already been done, probably better than anything I ever could have written - here it is, if you're interested. It comes highly recommended.

Anyway, in memory of D. Boon, here's the album, released on SST Records in July 1984. Enjoy, and as always, let me know what you think.