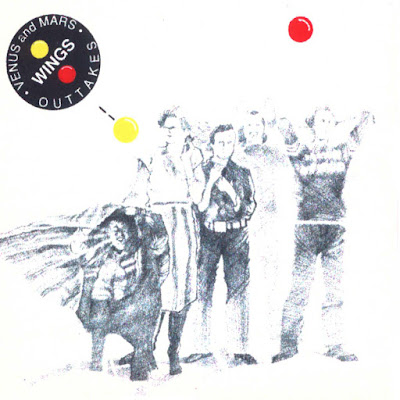 I was too young to absorb the Beatles in real time, so the first Beatles-related release I was conscious of as a kid was McCartney's "Uncle Albert/Admiral Halsey", a single from his first solo album Ram, released in August 1971.


I can't tell you why I enjoyed this tune so much as a child - maybe it was the sound effects (thunderclaps, ringing phones, seagulls), that made it seem more like a Yellow Submarine outtake (I'd just seen that movie for the first time that year, as part of a summer film series for kids sponsored by the local elementary schools - I saw Willy Wonka and The Phantom Tollbooth for the first time that summer as well).   After that limited exposure to McCartney's work, I wasn't really aware of anything regarding his music for another three years. I remember when Band On The Run came out - my older cousin had a copy of the LP, and he played it for me during a visit my family paid to his in 1974. I was fascinated with the "jailbreak" cover! Outside of Paul McCartney and his wife, I didn't know or recognize any of the other people featured on the front of that album. But it didn't matter - I thought that everything about Band On The Run - artwork and music - was great. My favorite songs at the time, outside of the title track, were "Mrs. Vandebilt" and "Helen Wheels" - they remain some of my favorite Paul tracks to this day. By the time I got to experience the album, it seemed that a vast majority of Americans and the world seemed to think as positively about this disc as I did. I had no idea until much later how much work and effort went into making this album the runaway hit it became. 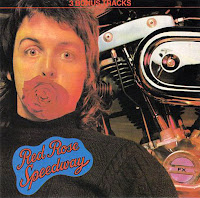 Due to the mixed critical and commercial reception of the group's first two albums, 1971's Wild Life and 1973's Red Rose Speedway, buyers were initially reluctant to shell out their hard-earned cash for Band On The Run, only to get burned again by yet another weak Wings release.  So, despite some positive reviews from influential music writers and publications, early sales performance of this release in December 1973 was good, but not great.  The album rose slowly on the US Billboard charts to a peak of #7 in early February 1974, before beginning to slowly slide back down the list.

To counter this perceived public lack on interest, Apple (well, specifically, Capitol Records, Apple's US distributor) embarked on a very planned and methodical marketing campaign - quite possibly the first one ever considered necessary for a Beatles-related release. Essentially the brainchild of Capitol's marketing head, Al Coury, Coury goosed LP sales by strategically releasing album singles at key points during the year, initially over McCartney's objections.  The first single Marketing released was "Jet" b/w "Let Me Roll It" in late January 1974.


The song quickly shot into the Top Ten in both Britain and America, where it remained until late spring, and rekindled public interest in the album - Band On The Run began moving up the charts again, and reached #1 US for a week in mid-April. When album sales began declining again that month, Coury arranged for the release of the next album single, the title track "Band On The Run" b/w "Nineteen Hundred and Eighty-Five". This single was even huger than the previous release; "Band On The Run" topped the American charts by June, and dragged the album along with it - the LP hit #1 again for three weeks that same month. Band On The Run topped the US album charts yet again in July. All told, the release was at or near the top of the charts for almost the entirety of 1974, staying in the Billboard Top Ten from January to late November. Its reception made McCartney the most commercially successful of the solo Beatles from that point on (believe it or not, but George Harrison was eating Paul's lunch on that measure in the early '70s).

After this year of great success, both McCartney and Capitol Records were eager to keep the money train rolling. Wings' lineup was augmented with new members during mid-1974 (Geoff Britton on drums and Jimmy McCulloch on lead guitar joined Paul & Linda McCartney and guitarist Denny Laine), and after some early session work in Nashville and London in the fall of 1974, the band headed to Sea Saint Studios in New Orleans in January 1975 to complete recordings for the next album. The Louisiana sessions were progressing fairly well, except in one area - some animosity had arisen between Britton and McColloch during the Nashville stay, and by the time they reached New Orleans, they fucking HATED each other. Fed up with the tense atmosphere, Britton suddenly quit the band in the middle of their Sea Saint session - he'd been a member of Wings for less than six months. McCartney scrambled to find a replacement, quickly auditioning a suitable alternate, American drummer Joe English. Despite that brief hiccup, the main album tracks were all laid down less than a month after arrival in New Orleans. Some rerecording and overdub work was completed in California a couple of months later. 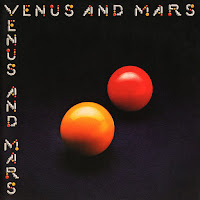 The album Venus and Mars was released in late May (two weeks after the release of the lead single, "Listen To What The Man Said") to a public still hungry for Wings product, and in the afterglow of the positive vibes for the last album. Both the single and the album topped the US charts, with the latter selling over 4 million copies worldwide. However, the overall critical reaction to Venus and Mars was much more subdued and muted than for Band On The Run; the LP was generally viewed by music writers as a step back by the band. Still, it sold - which was all Capitol cared about.

The commercial success of this album served as the impetus for McCartney and Wings to embark on a year-long worldwide concert tour, Wings Over The World, where the band played over sixty arena-rock shows in eleven countries on three continents. In all, more than a million people attended those sold-out concerts, further establishing McCartney's reputation as a commercial juggernaut. 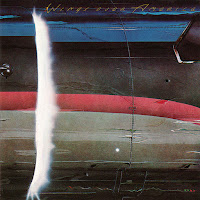 The tour even resulted in a companion album, the triple-disc Wings Over America live release, another Number One record for the band in early 1977.

Generally, I tend to agree with the critics regarding Venus and Mars. Outside of "Listen To What The Man Said", I've never found the music on this disc to be as immediate or compelling as that of the previous album. It's not as though McCartney was resting on his laurels here, after the huge success of Band On The Run - there was some thought and hard work put into these selections. I don't know whether it was due to the band turmoil during the recording, or label pressure to start milking Paul and his band as a financially-viable hit machine . . . but for me, there's something missing in the overall album.

However, some folks regard Venus and Mars as equal to, if not superior, to Band On The Run. I'll let you all be the judge of that, by giving you a glimpse into the creative effort behind the making of this album. Here are an assortment of demos and rehearsal tracks from the Venus and Mars sessions in 1975. According to bootlegzone.com, The 910 (a key publication on unreleased Beatles recordings) states that the source of this music is an unnamed person (presumably in the production crew) who surreptitiously recorded and retained a low bias cassette dub of some early takes and some later, more polished remixes.

Here is an excerpt from the liner notes on the 2005 release of this bootleg, containing a bit more info:


"The music was culled from sessions that took place between January and April of 1975, first at Sea Saint Studios, New Orleans and later at Wall Heider Studios in Los Angeles. The majority of the sessions feature the fifth Wings line-up of Paul/lead vocals, guitar, bass; Linda/piano, synth, backing vocals; Denny Laine/guitar, bass, backing vocals; Jimmy McCulloch/guitar, backing vocals (lead on Medicine Jar); and Joe English/drums (it is unknown whether this music features any of Geoff Britton on drums)."

In terms of track listings, here's the lineup for both discs:

For your consideration, here are Vols. 1 and 2 of Venus And Mars Outtakes Are Alright Tonight, a rare and hard-to-find selection of rough cuts, rehearsal tracks and unreleased material from Wings' sessions for the album of the same name, first pressed by bootleg label Starlight Records in 1990 and subsequently released on CD by equally shady German record label No Pig International in 2005. Have a listen, and as always, let me know what you think.