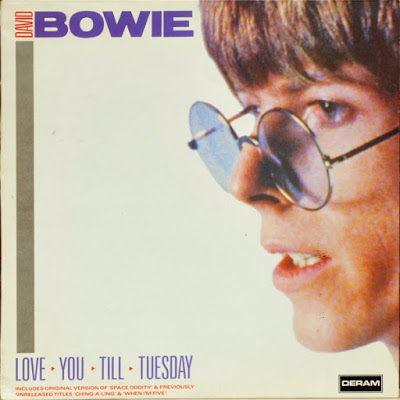 It's been a week-plus now since David Bowie's death . . . and it still feels weird. I don't want to overplay the "end of a era" thing, but that's sort of the way his passing feels. And most of the tributes and commentaries that followed in the wake of his death have all, either overtly or not, mentioned the same feeling. The man was one of a kind, and it may be a long time before someone with his creative gifts, innate intelligence, and puckish wit ever passes this way again. 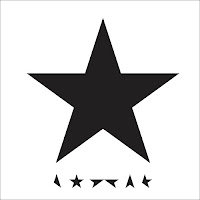 In the past week, Bowie's latest album Blackstar has shot to the top of the U.S. and several international charts, and NINE of his earlier albums also reentered the Billboard 200, including two more in the Top 40: The Best Of Bowie at #4 and The Rise And Fall of Ziggy Stardust & The Spiders From Mars at #21. Radio stations around the world have held week-long tributes - since last Monday, Radio NZ has played nothing but Bowie hits. And music bloggers all over the Internet (myself included) have fallen all over themselves writing about the man and artist and trying to come up with obscure, hard-to-find tidbits of Bowie-ibilia to make themselves stand out from their peers.

I was going to try to avoid doing that . . . but in reviewing the artist's offerings made available on various sites over the past few days, I noted that one interesting artifact appeared to be missing - an artifact that I happen to have in my possession.

In the mid-60s, a teenaged David Jones passed through a series of unsuccessful bands - The Konrads, The King Bees, The Manish Boys, The Lower 3rd, The Riot Squad - most of which recorded non-charting, poorly-received singles. With the emergence of another English David (Davy) Jones, a member of the American pop group The Monkees, Jones 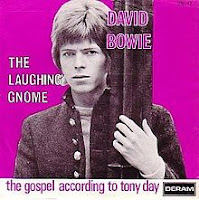 changed his name to David Bowie in late 1966 to differentiate himself. Not that the change in moniker did him any good; he released a solo single in April 1967 (the weird and wonderful/embarrassing (depending on who you ask) children's song "The Laughing Gnome") and his debut album, David Bowie, that June (the same day Sgt. Pepper's Lonely Hearts Club Band was released), both on Deram Records. 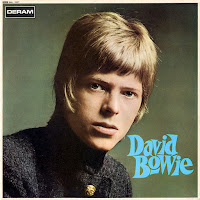 The problem with David Bowie especially, in my opinion, is that it's all over the map - on it, Bowie does folk tunes, Anthony Newley-type show tunes, baroque pop, etc.; none of them written especially well. Buyers just didn't know what to make of him; was he 'for real', or just a novelty artist? The result was that they stayed away in droves - neither the single nor the album charted. This would be the last music Bowie released for more than two years (Deram dropped him a couple of months later).

In the interim, Bowie began an intensive course of study in dance and the dramatic arts under renowned choreographer Lindsey Kemp. He immersed himself in lessons in mime, Medieval Italian comedy and avant-garde performance, and began his first serious exploration into creating a distinct persona/personae for himself. David also started performing again, in a folk/Merseybeat combo with mime interludes and poetry readings mixed in, with his new girlfriend Hermione Farthingale (God, how 'English' a name can you get?) and friend John Hutchinson. And through his connection with Kemp, he got a couple of small uncredited parts in British movie and TV productions. Here he is (blink and you'll miss him) as an extra in the 1969 movie The Virgin Soldiers:


Around the same period, Bowie got a new manager, Kenneth Pitt, who believed in David's talent but was annoyed and frustrated by his lack of wider recognition. Pitt wracked his brains to figure out some way to bring Bowie's gifts to the masses. A chance encounter with a West German television producer in late 1968 provided him with what he thought was an answer: Pitt would put together a short promotional film showcasing Bowie's talents. The professionally-produced short would include not only music from David's 1967 album, but also dramatic and mime bits. The German producer broadly hinted that, once completed, he would air the film on Zweites Deutsches Fernsehen (ZDF), the country's public broadcasting station, the equivalent to the American Public Broadcasting Service (PBS). Pitt figured that that sort of exposure might break Bowie out in Europe, with that fame subsequently translating back to Britain. He suggested his plan to Bowie, who also thought it was a boffo idea.

In choosing which songs to feature and dramatize in the film, Pitt and Bowie selected four from David Bowie, along with two new songs David had recently written with Farthingale and Hutchinson, "Ching-A-Ling" and "When I'm Five". Added to these selections was "Let Me Sleep Beside You", a single recorded and rejected by Deram shortly after the 1967 album was released and shortly before the label released him (Bowie wrote this song with a new friend of his, a young American expat record producer named Tony Visconti). Pitt enlisted a Scottish friend who had spent considerable time in the U.S., Malcolm Thomson, as the director, and arranged for a week's shooting at a studio in Greenwich in late January 1969; the schedule was delayed due to Bowie's participation in The Virgin Soldiers, shooting earlier that month.

David arrived at the Greenwich studios that January 26th ready to go in every aspect but one; his hair was unfashionably short, cut to regulation Army length for the war film. Pitt and Thomson were aghast, but quickly improvised by finding a suitable long-haired wig for Bowie to wear throughout the shoot. Bowie also arrived with another piece to include in the production; an unfinished outer space-themed song that he and John Hutchinson had been working on during the prior week called "Space Oddity".

The filming ran into difficulties from nearly the very beginning. Pitt and Thomson began to clash over content, quality and subject matter. I think that Pitt was looking for more of a quickie showreel done relatively cheaply, where Bowie's songs were the standout/featured attraction. Thomson, on the other hand, wanted to add more costumes, camera movement, and artistic nuances into the production. A major point of contention between the two centered on plans for "Space Oddity"; in particular, Thomson wanted to make the part where Major Tom cavorts with the "space maidens" considerably more 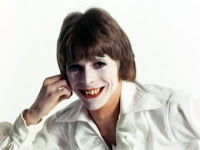 sexy and risque than what may have been permitted for German television. Also, a considerable amount of time and effort was expended on Bowie's mime segment, titled "The Mask". As a result of all of this, studio time had to be extended, and the overall cost of the film began to mount.

Finally, after nearly two weeks of filming, the film (entitled Love You Till Tuesday) wrapped on February 7th. Here's a list of the performance pieces on it:
Pitt immediately contacted his West German friend, to let him know the short was ready for airing . . . but found that the producer had moved on from ZDF, and no one else there was interested in showing a music film by some unknown English artist. Bowie's manager found he had spent all of his money for seemingly nought. Desperate now, Pitt began shopping the showreel around to various British networks and record labels, but no one was interested in anything about it . . .

Well, that is, ALMOST no one.

Ken Pitt was given an audience with representatives from Mercury Records' British subsidiary Philips in the early spring of 1969. The reps found little of interest in the film . . . except for "Space Oddity". From that modicum of interest, Pitt was then able to negotiate a one album deal (with an option for another one or two albums) for Bowie with the label. David was rushed into the studio; "Space Oddity" was recorded that June 20th, and released as a single on July 11th, 1969, just in time to take advantage of the Apollo 11 mission (the first lunar landing) nine days later. The single proved to be a hit in Britain, where after a slow start it peaked at #5 (it did nothing in America on its initial release, stalling at #124 - but on its re-release in 1973 in the wake of Ziggy Stardust, it reached #15, his first U.S. hit single). 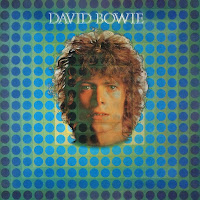 This song, and the subsequent album David Bowie (aka Man Of Words/Man Of Music in the States) released in November 1969, launched David's career.

As for the film: apart from its use to secure the Mercury/Philips deal, Pitt found no immediate further use for it and filed it away, where it sat unseen for years. But in the early '80s, with the advent of home video, Bowie's former producer (the two split in 1971) realized he may have something golden on his hands. He contacted Polygram (by 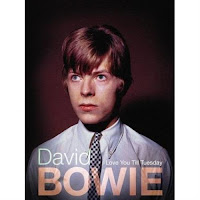 then the holding company for Philips) and made a deal for its release; Love You Till Tuesday went on sale in VHS format in May 1984. Not to be outdone, Deram Records, the label holding most of the material used in the movie, released a "soundtrack album" (actually, just the versions of film songs recorded for David Bowie, along with non-film singles from the same period) that same month. Here's the song lineup:

Looking at the film nowadays, it's hard to properly consider it for its standalone artistic and musical merits in the context of its time. It's very much a time capsule of late '60s "Swinging London" styles and attitudes, and as such, in this day and age it's an effort to take it all seriously. For example, it is difficult to watch Bowie, the dapper young puka-beaded gentleman, lounge suggestively on pillows while warbling the title track and resist the urge to shout "Yeah, baby!" in a cheesy Austin Powers accent:

(Did you hear him briefly snicker halfway through the video?  David knew full well what the story was, and what he was doing . . .)

All in all, there's nothing in Love You Till Tuesday, either the album or the film, that's particularly deathless or essential in Bowie's career. Other than "Space Oddity", which was considerably revamped for its summer 1969 release, most of the other tunes here are either lightweight or forgettable. But both works of art stand as interesting artifacts in the early design and development of David's sound and vision of himself to come. The seeds of Major Tom, Ziggy Stardust, Pierrot from Scary Monsters, and the otherworldly/alien Bowie can be found in his performances here.

And what's also great to see and hear here is Bowie as a young man - full of energy, life and happiness, presenting his compositions and ideas to the world with a knowing smile on his face and absolutely no fear whatsoever. No matter what other changes he brought to his act and career, that part of him always stayed consistent and true. Thank God for that.

So, for your consideration, here's:
I promise that this will be my last Bowie post for the foreseeable future. So enjoy, and as always, let me know what you think.