The Wiggles - "Unto Us, This Holy Night" 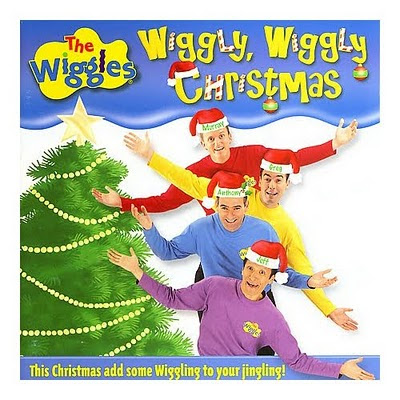 OK, OK . . . I can almost see the looks of incredulity on your faces with this entry. But bear with me, while I explain its inclusion here (and no, I am not insane).

Frankly, it's hard to write a good modern-day Christmas song. I think that most people have a pretty set list of images and ideas in their heads as to what Christmas is and should be all about. These things include stuff like sleigh rides and snowflakes: Santa Claus and reindeer: Jesus, Mary and Joseph; presents and bells and Christmas tree lights; heading home to see the folks in their nice, warm house and having holiday dinner with the family; etc. You know what I mean. The problem that holiday songwriters have nowadays is that, musically, all of these themes have been covered and recovered, ad nauseum. There are literally dozens of songs about sleigh rides, scores of songs referring to Santa, hundreds of songs addressing the subject of Christmas snow or holiday weather, and thousands of song celebrating Bethlehem and the birth of Jesus. It's all been done.

In addition to theme, a holiday song has to set the right tone - sincere without being sappy, real enough without seeming contrived. Think of the best lines in the greatest Christmas songs - "Chestnuts roasting on an open fire; Jack Frost nipping at your nose"; "For the holidays you can't beat home sweet home!"; "Oh the weather outside is frightful; but the fire is so delightful"; "I'm dreaming of a white Christmas; just like the ones I used to know". All of those songs conjure up and reinforce cherished Christmas images and ideals, even for people who have never roasted chestnuts in their lives or have never experienced a white Christmas. [For example, it was always sort of weird hearing these traditional holiday tunes played and sung when I lived in New Zealand, where Christmas falls in the middle of the austral summer there. And yet, the people there cherished this music as much as folks in the Northern Hemisphere did, so while it seemed odd, it still felt right and natural.}

Unfortunately, all of this hasn't stopped contemporary songwriters from trying over and over again to create up a new bit of holiday musical magic. Most of the latest results have been embarrassingly trite or maudlin - prime examples include Paul McCartney's "Wonderful Christmastime" from 1979, Leann Rimes' "Put A Little Holiday In Your Heart" from 1996, 2000's "My Only Wish (This Year)" by Britney Spears, and Faith Hill's 2008 song "A Baby Changes Everything". Even worse have been the spate of Christmas novelty songs released in the past generation - the worst of which being the reprehensible "Grandma Got Run Over By A Reindeer"; I could live just as long and die just as happy never hearing a note of that stupid song ever again.

With all of this in mind, you could quite easily make the argument that there hasn't been a great, sincere, classic (not novelty) Christmas song written since the mid-1960s. I'm referring to beloved tunes like Vince Guaraldi's "Christmas Time Is Here" from the 1965 Charlie Brown Christmas special, Andy Williams' 1963 classic "It's The Most Wonderful Time Of The Year", and "Do You Hear What I Hear?" by the Harry Simeone Chorale in 1962 (I'd include Burl Ives' "Holly Jolly Christmas" and Thurl Ravenscroft's "You're A Mean One, Mr. Grinch" in this group, but I consider these more as novelty holiday songs).

Now, I'm not a big Wiggles fan. They were huge around my household back in the early part of this decade, when my children were still toddlers. Their TV show was rarely missed in my house, and more than once I stood in line overnight to buy tickets to the Australian group's local live shows. But the popularity of The Wiggles waned as my youngsters approached school age, relegating the piles of Wiggles DVDs, toys and other paraphenalia to boxes in the storage area.

I bought the album Wiggly Wiggly Christmas for my one- and two-year-old daughters in 2002, although it was released in 2000. The majority of the material on the disc is kiddie fodder - reworkings of traditional Christmas tunes alongside bouncy, silly original music usually referring to a character on the band's TV show: "Henry's Christmas Dance" or "Wags Is Bouncing Around The Christmas Tree", for example.

But there was one song on this album which stood out from the rest: "Unto Us, This Holy Night". On this one, the band played it straight, and offered up a superb Latin-tinged melody about the birth of Jesus, subtlely highlighted with tasteful horn arrangements. The song is so glaringly good, that it's hard to believe that it's stuck unheralded in the middle of an album like this.

Here's a clip of the Wiggles from their Wiggly Wiggly Christmas video, playing this song; it starts at about 1:32 after the chatting with the children:


It's almost shocking to admit this, but I have to say, in my opinion, that The Wiggles' "Unto Us, This Holy Night" is simply one of the best Christmas songs written in the past twenty-five years. But I'll let you all decide for yourself. I have mercifully taken this one song off the album (and believe me, if you knew how bad stuff like "Let's Clap Hands For Santa Claus" or "Go Santa Go" really was, you'd be thanking me for not posting the rest of the disc) and attached it below. Check it out, and let me know what you think of it, or of any of what I've written above.