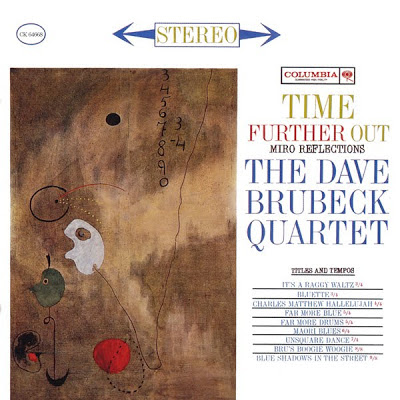 I don't usually write timely posts related to recent news items . . . but in this worthy case, I'll make an exception. Dave Brubeck, who died earlier this morning, was a GIANT, not just in the world of jazz, but in popular music as a whole, and as such he deserves heartfelt acknowledgement and profound tribute. 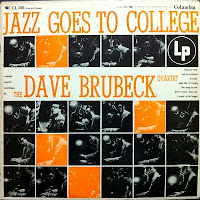 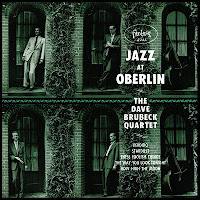 Brubeck was already a highly experienced and hugely successful musician when he formed his legendary quartet in 1951.  The group established its headquarters at San Francisco's former Blackhawk club, but during the Fifties made an effort to expand their audience through concerts of college campuses nationwide and during the decade releasing a series of popular recordings based on these tours: Jazz At Oberlin, Jazz Goes To College, Jazz Goes To Junior College, etc. He formed what is now considered the "classic" quartet lineup in 1958, with Joe Morello on drums, Eugene Wright on bass, the great Paul Desmond on alto sax, and himself on piano.

The following year, the group released Time Out, a jazz album featuring songs with unusual/rarely used time signatures, like 5/4 and 9/8. Brubeck's record company wasn't thrilled about putting the album out, and the release got creamed by critics at the time, but nevertheless Time Out became one of the most popular and best-selling jazz albums of all time, peaking at #2 on the US pop album charts (unheard of for a jazz disc), with the great 5/4 tune "Take Five" off of it becoming a chart hit and popular standard.

I'd heard "Take Five" a few times before in my life, but it wasn't until 2000 that the song really took hold of me. I was out in Los Angeles for a few days late the spring, attending my younger sister's graduation from USC's grad school, along with meeting up with old friends and running around the city. By that point, I'd been to L.A. enough to know the places I liked (like Pink's Hot Dog stand, Lola's Martini Bar in West Hollywood and the Formosa Cafe) and the places to avoid (basically, most of the touristy stuff like the Chinese Theater or the Hollywood sign), so I spent a lot of time at the places I preferred, just grooving to what the city had to offer. 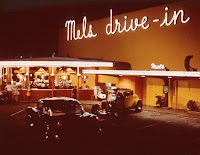 Early one morning, after a long night of fun in out in Santa Monica, I found myself seated over a pastrami & rye in a booth at Mel's Drive-In on Sunset Boulevard. In the heart of that built-up and relentlessly modernized area of L.A., Mel's felt like an anachronism, a throwback to the American Graffiti, "Happy Days" era - it had that sort of vibe working, with its old-timey look, red pleather seats and general atmosphere. Each booth had a small coin-operated jukebox attached to it, containing songs from that bygone age - stuff like "Mr. Sandman", "Splish Splash" . . . and "Take Five", a song I hadn't heard at that point in years. I dropped my nickel, punched in the Brubeck song, and it was like BAM! The power, the smoothness, the overall coolness of that tune just hit me right between the eyes, right then and there. I sat there and played that song three more times before I settled my check, and with each play, "Take Five" took hold of me more and more. I walked out of Mel's that morning a Brubeck fanatic; later that day, I went down the street to the old Tower Records and bought Time Out. 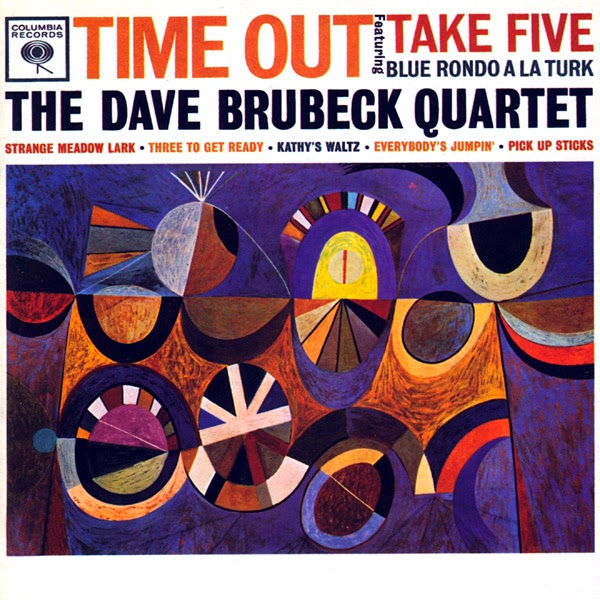 As much as I thoroughly enjoyed Time Out, it was a long time before I discovered that the Dave Brubeck Quartet had released a followup/sequel to this classic. Time Further Out was released in 1961, and repeated the pattern of the previous success, showcasing tunes with strange beats (for me, a lot of the fun in these albums is trying to wrap my head around the time signatures when listening to the songs, trying to determine exactly what the beat is for each tune). While at first glance it may seem that the group was resting on it laurels and repeating its popular success, that is definitely not the case. Time Further Out is the equal, if not superior, to Time Out.

Why? Well, as good as the latter was, in a lot of ways Time Out feels sort of like a music experiment, with the quartet trying out the different signatures and arrangements in almost a detached, clinical fashion, just to see if they can do it - a scientific musical exercise, if you will. But to me, on Time Further Out, the music seems to have more heart and feel behind it. It's as if during the two years after the release of Time Out, the band got more and more comfortable with working with different timings; they didn't have to THINK about it as much, what went into a 9/8 or a 7/4, and as such they could concentrate more on the playing, the infusion of character and soul into their music, rather than in making sure they all stayed in time. Listen to songs like "Maori Blues" or "Unsquare Dance", and you can HEAR the fun the band is having in playing these songs together (listen to them laugh together at the end of the latter song!). Time Out is brilliant on a technical level; Time Further Out is brilliant on a musical level - and as such, the two albums complement and complete one another. Both are essential jazz recordings.

The classic Dave Brubeck Quartet broke up in 1967, but Brubeck continued to record and play live shows, both solo and with other groups, up until his death today, the day before his 92nd birthday. In the years before his death, he has been justly and widely recognized as one of the towering figures in jazz and popular music, and the music and legacy he leaves behind will keep his name alive far into the future. Thanks for everything, Mr. Brubeck, and all the best to you in your current journey.

Here's the Dave Brubeck Quartet's classic jazz album Time Further Out, released by Columbia Records on May 3rd, 1961. Enjoy, and as always, let me know what you think.