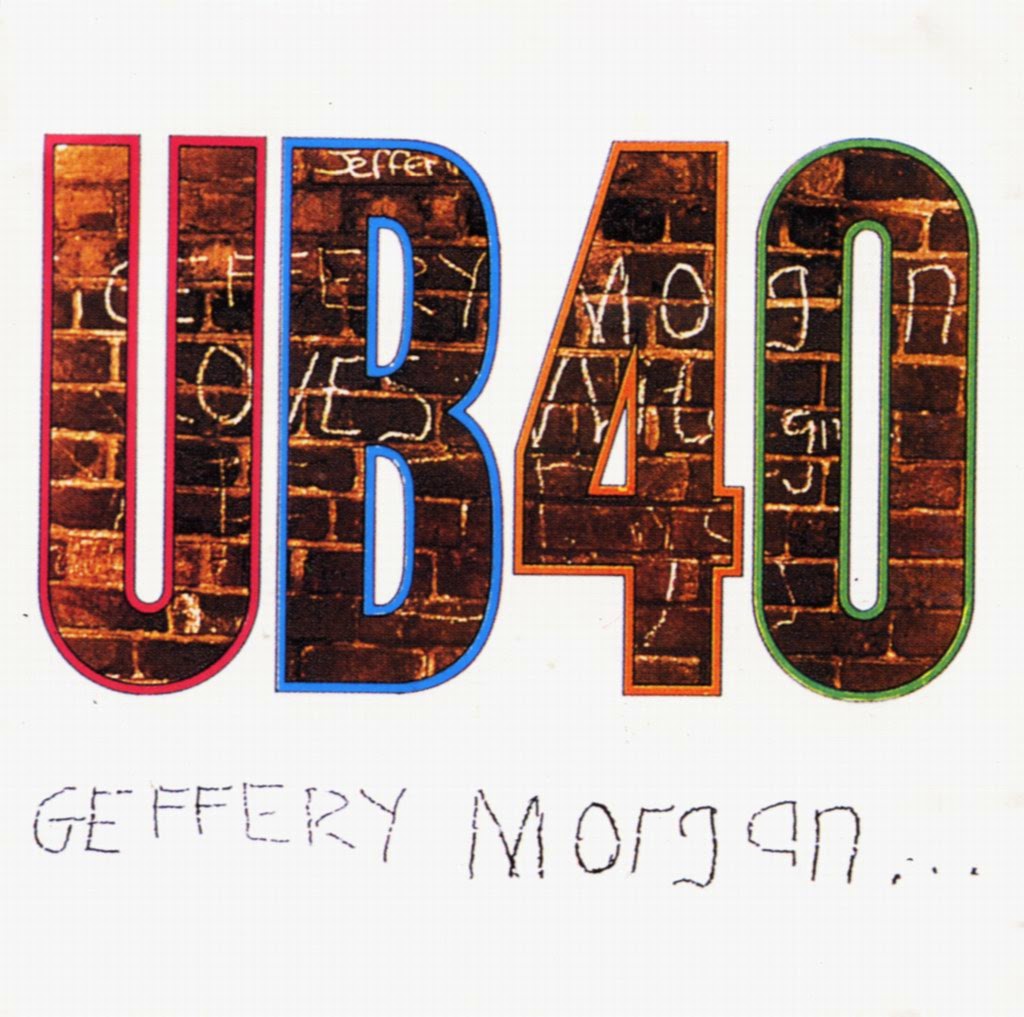 I recently got my new iPhone model (the 128 GB 6S) in the mail after waiting most of a month for it (I REFUSED to stand in line at an Apple Store like a knucklehead to buy it . . . unlike plenty of others, in my observation). I loaded all of the information off of my old iPhone onto, then went looking for some new applications to add to my now-huge capacity. One that seemed pretty cool was the Bandsintown app, which notifies you of live music events in your area, based upon the music you have stored on your phone.

This app was ideal for me; I don't know how it is in your area, but it seems that nowadays it's getting harder and harder to find out when cool bands are coming to town. Until fairly recently, my go-to source for information on local concerts was the local weekly free newspaper you could find on the street and in places like record stores and coffee shops. I'm sure that there are many other methods of finding out this info, but the weekly alternative press was something I was used to, and had used for decades for finding out what was going on. When I lived in Washington, DC, I looked forward to every Thursday,

when the newest edition of the superb DC City Paper would be out on the streets, so I could see who was playing that week at The 9:30 Club or The Black Cat. In San Francisco, the SF Weekly knew the ins and outs of that city's music scene; down the coast, the LA Weekly kept me informed of what was happening down there. Even Dallas, Texas had a decent weekly, the Observer.

But in recent years, the alt press has been taking a beating, mostly due to changes in the music business and media in general. Record companies used to spend a lot of time and effort ensuring that their album releases were written up in these journals, and these papers counted on that conduit of somewhat exclusive music information, because it drew readers and generated advertising revenue. But with the rise of the Internet came changes in not only the way people acquired their news, but also how they purchased their music. Music companies realized they could reach many more people by promoting their wares online rather than via newsprint, and people began going to iTunes or Amazon for albums and songs, rather than visiting their local record shops. So the weekly papers began losing influence and revenue, especially once the major music retailers (Virgin Megastore, Tower Records, Sam Goody/F.Y.E., etc.), the papers' major outlets, began consolidating, downsizing and closing their doors. These days, a lot of these alt-weeklies are just holding on, after slashing their staff and scope of coverage. The local papers up here weren't as fortunate - the long-running Boston Phoenix shut down in early 2013. Its sister paper, the Providence Phoenix, containing

information on happenings in Rhode Island, has recently been harder and harder to find, and I finally found out why - it too is finally throwing in the towel, with its final edition published yesterday. So like I said, now that I have none of my old reliable concert information sources to rely upon anymore, this Bandsintown app will be very useful.

I fired the thing up and it did a scan of my phone's songs, then provided me with a list of all of the artists and similar artists who may or may not be on tour (the bolder the name of the group, the closer/more imminent their next show would be). I was rather surprised to see, of all the bands listed, the group UB40 on the tour roster. I thought those guys had broken up years ago!

I used to be a big UB40 fan back in the day. Like practically everyone else in America, my gateway to this band was their song "Red Red Wine", an old Neil Diamond cover that was the band's first US hit, peaking at #34 in March 1984, during my plebe year at the Naval Academy (the song was re-released as a single in the States in 1988, and this time made it to #1). As plebes, we weren't allow to have radios or music devices (well, at least not officially . . . !). But no matter - you heard "Red Red Wine" everywhere that spring, wafting out of dorm rooms throughout Bancroft Hall. Soon after Plebe Year officially ended that May (just before the senior class graduated), I went into downtown Annapolis and made my first "legal" music purchase of Labour of Love (containing that song) on cassette at a local record store. 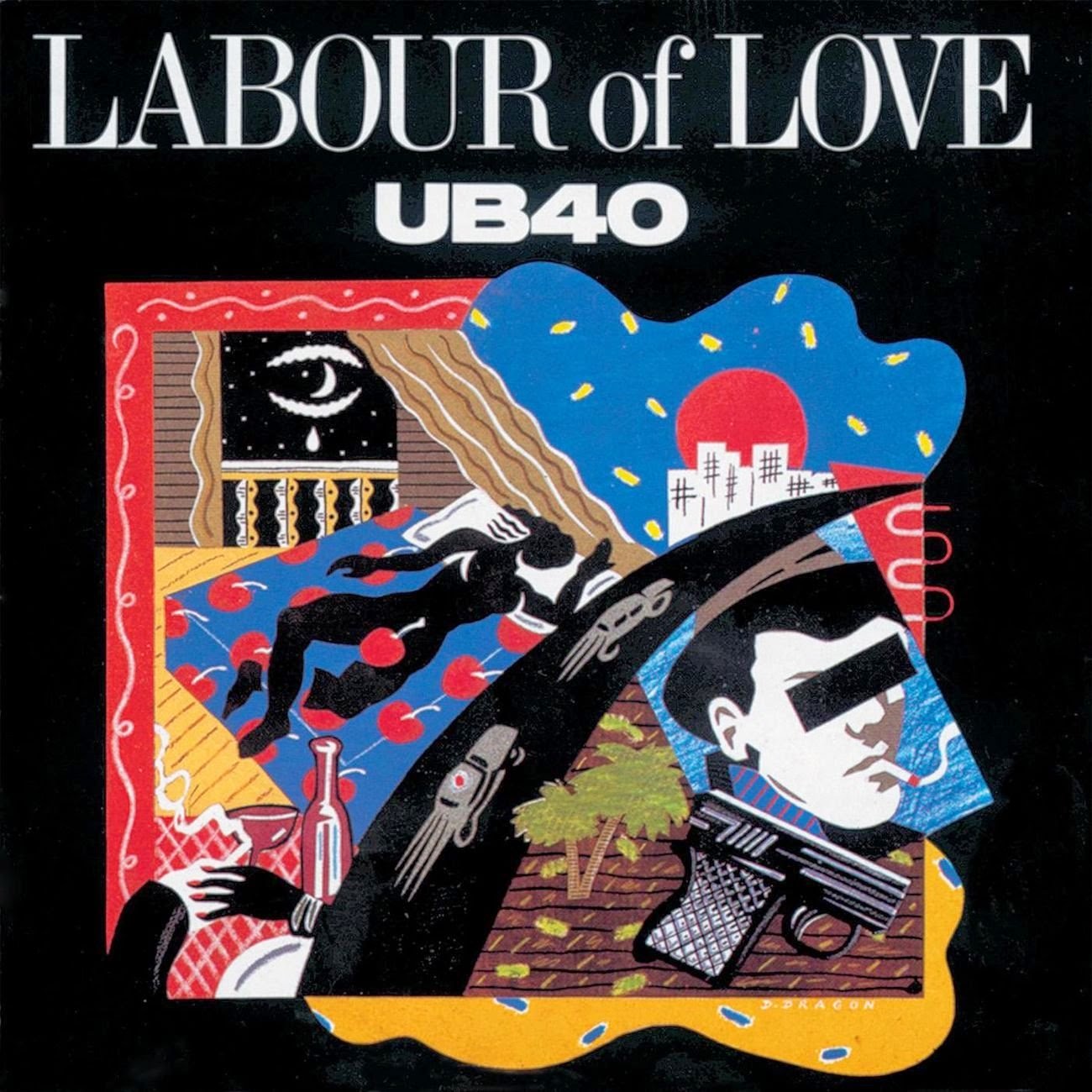 I thought that every song on Labour of Love was fantastic. While "Red Red Wine" was the only tune that made an impression on America, three other songs ("Many Rivers To Cross", "Cherry Oh Baby" and "Please Don't Make Me Cry") also made the UK and Irish Top 20, and the album went multi-platinum in England (and sold a million copies in the U.S.). Over the next year, I set out to acquire the rest of UB40's back catalogue, haunting record stores in the DC area, looking for import copies of their original British albums. By the summer of 1985, I had managed to acquire pretty much all of them - 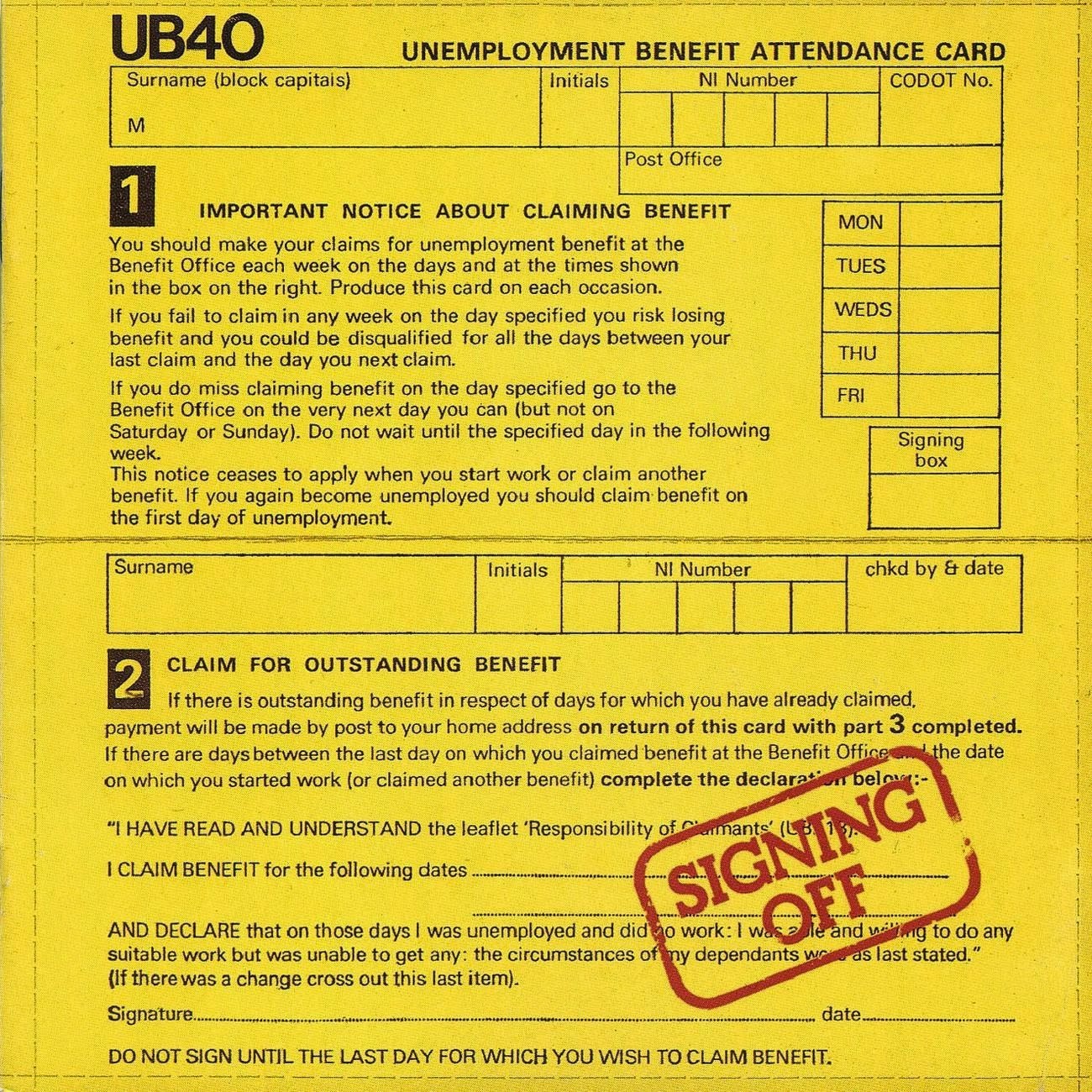 What I loved about UB40 in those days is the power and conviction they put into their music. They weren't just a bunch of Brits dabbling in reggae - they WERE a rock-solid reggae/dub band, with a sound that seemed to come straight from the Caribbean, but dripping with political meaning and social consciousness, aspects that resonated with the Britain of the late 70s/early 80s. Once I listened to these discs, these aspects got to me as well. Songs like "Tyler" (about a 17-year-old black Louisianan wrongly imprisoned in 1976 for the death of a 13-year-old white boy - this song was intended to be UB40's first U.S. release in 1980), "King" (about Martin Luther King) and "One In Ten" showed that these guys weren't fooling around. It used to be said back in the early 80s that the Irish band U2, with their politically-charged songs and events, was "the only band that mattered". I would venture to say that, in terms of "mattering", UB40 far outstripped U2 in that regard. When I heard that the band was going to release a new album in the fall of 1985, I was extremely hyped up for it.

Geffery Morgan come out that October, as the follow-up to UB40's U.S. breakthrough album Labour of Love. It had favorable sales, but I think it was a disappointment to those American buyers looking for another "Red Red Wine". As such, its been sort of an overlooked release in this country, only making it to #68 on the Billboard 200. But I feel Geffery Morgan is one of the great UB40 albums, perhaps their last great album, with some of the best original material they ever did. The opening trio of tunes, "Riddle Me", "As Always You Were Wrong Again" and "If It Happens Again" are incredibly strong, and set the tone of quality for the rest of the album. Other highlights include the beautiful "Seasons", the jazzy experimental "the Pillow", the superb "I'm Not Fooled So Easily", and one of their great closers "You Eyes Were Open".


In many ways, Geffery Morgan is truly UB40's transitional album, the dividing line between UB40's purer reggae/dub releases earlier in their career and the poppy, less-adventurous, radio-friendly "reggae karaoke" they seem to have gotten into immediately afterwards. While the reggae groove on this album is still strong, in many songs ("Riddle Me", "You're Not An Army") you can sense the band's movement to the mainstream. Note that their next U.S. release, Little Baggariddim featured their Top 40 cover (with Chrissie Hynde) of the crowd-pleasing "I Got You Babe", followed by 1986's Rat In The Kitchen album, full of what were in my opinion watered-down faux-reggae hits. 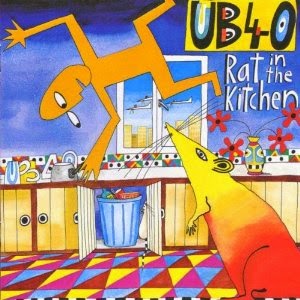 UB40 went through a bad patch shortly after the release of Rat In The Kitchen. In 1987, bassist Earl Falconer was involved in an auto accident in England that killed his brother, UB40's producer Ray "Pablo" Falconer. It was determined that Earl Falconer's blood alcohol level was more than twice the legal limit, and he was convicted and sentenced to three years in prison (the band's only release during his time in jail was 1988's Labour of Love II). However, the band rebounded soon after Falconer's release. UB40 released Promises & Lies in 1993, their first volume of new material in almost five years (this is the album that Bitty McLean worked on). The album contained their biggest hit, a cover of Elvis Presley's "(I Can't Help) Falling In Love With You", that was used in the Sharon Stone movie Sliver. This pop-reggae number reached #1 in the U.S. in May 1993, where it remained for seven weeks. It also marked the effective end of my UB40 fandom. The group released several more albums over the past twenty years, including two more Labour of Love compilations. Their releases are regular visitors to the UK Top Thirty, but they haven't done squat in America since Promises & Lies. In my mind none of their discs of the past two decades capture the fire, power and conviction of that band that came storming out of Birmingham nearly forty years ago. 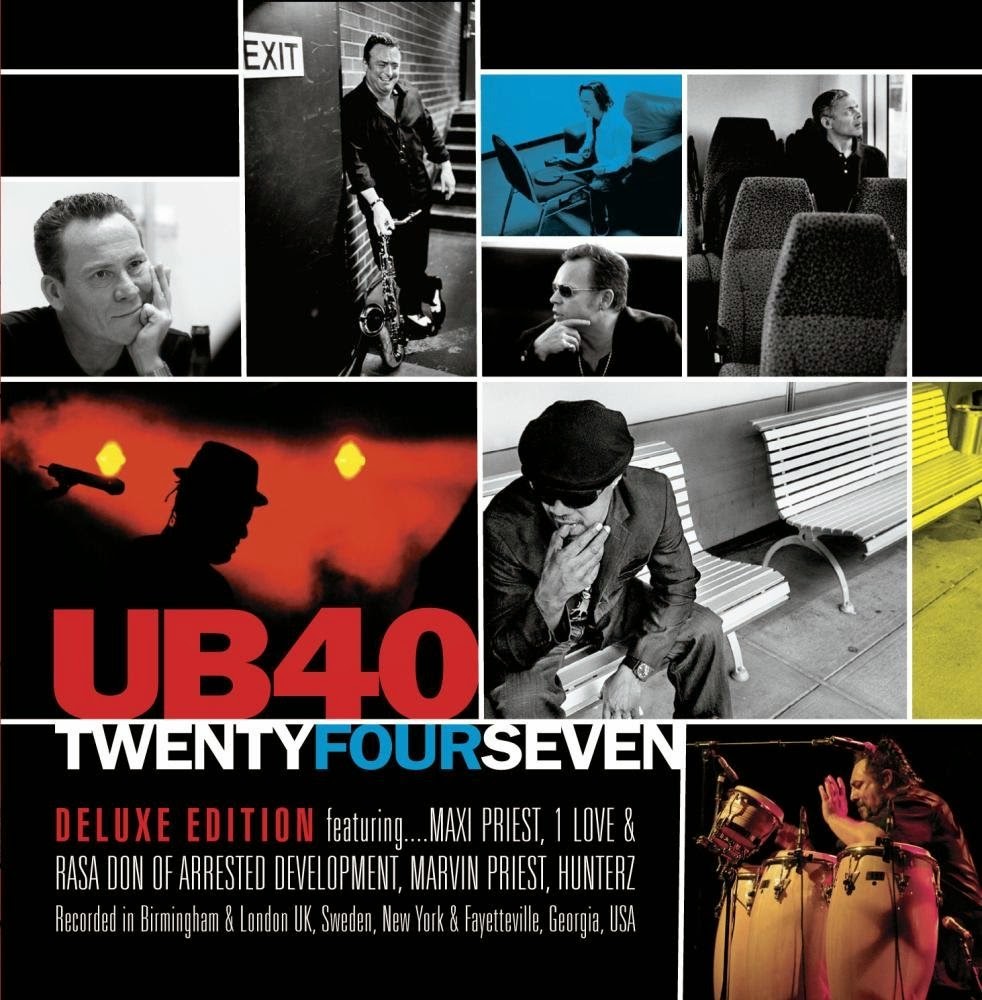 2008's TwentyFourSeven was the last UB40 album featuring all of the original members. In 2013, amid much acrimony and serious financial issues (including bankruptcy declarations by several group members, related to their label's woes), UB40 divided into two factions, with original members Ali Campbell (lead vocals), Mickey Virtue (keyboards) and Astro (trumpet, toasting) leaving the main body and touring as a trio, but still billing themselves as "UB40". Just last month, the main band filed writs against the "UB40" trio in High Court, claiming that they have no rights to the name. The case has yet to be heard, but it is bound to be a long, drawn-out, contentious affair, as neither side seems willing to back down. For the moment, however, there are TWO UB40s currently out on tour. All in all, it's a sad coda to a once-great band.

So here, for your listening pleasure is Geffery Morgan, in my opinion the last, best representation of UB40 as an accessible but authentic reggae band, released thirty years ago today (October 16th, 1984) on DEP International. Enjoy, and as always, let me know what you think.