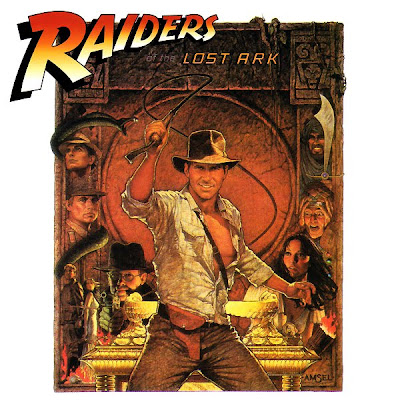 I love movies - everything from Orson Welles dramas to Bogart flicks, Hitchcock thrillers and Fred Astaire musicals, well-crafted Coen Brothers classics to Farrelly Brothers comedies (whatever happened to those guys, BTW?) However, I have to say that my hands-down, no-doubt, favorite movie of all time is Raiders Of The Lost Ark.

After I graduated from high school in California in 1981, not yet 17 (I skipped a grade), I left home and flew 3,000 miles away to study in Newport, Rhode Island for a year. As had been the case in my life since second grade, I once again found myself in the company of classmates at least a year older than I was - and when you're barely 17, a year is a lot. I was still pretty much a kid, and a geek at that. While the rest of the guys were racing into town on the weekend to get flat-out hammered in one of downtown Newport's many bars, a big weekend for me would be grabbing a cheeseburger at the Burger King, then continuing down Thames Street to the video arcade and spending the rest of the evening in front of the Donkey Kong or Galaga machine (I was Rhode Island state champion on Galaga at one point - that's shows you what I did with my time (geez, I don't realize how geeky an 'accomplishment' that was until I wrote it just now . . .)).

But after a couple of weekends, that routine got old, even for me. So one weekend in late September of that year, I decided to mix it up a little, and catch a movie. At the time, the main square of Newport had two theaters, the Jane Pickens (now used mostly as a live performance venue) and the Opera House, the latter of which had multiple theaters. I got to the Opera House box office in time for the early evening show, and settled on Raiders, a movie that had been out since late spring, but one that had not piqued my interest up to then. I bought my ticket, got my popcorn, and settled in . . .

Two hours later, as the credits completed their roll and the lights came up, I was still sitting there, rooted to my chair. Words cannot describe how I felt after that very first viewing of Raiders; I simply knew that I had just seen the greatest movie ever made. The story, the action, the dialogue, the retro-serial feel of the picture, the casting . . . EVERYTHING about that movie was note-perfect. All I knew was that I had to see it again - immediately. The cleaning people finally rousted me from my seat, but I went back outside and purchased another ticket for the late evening show, which I attended and enjoyed even more than the first. I had a new favorite movie!

Raiders Of The Lost Ark played at the Opera House for months, until late spring of the following year. And EVERY Saturday during that time when I was in town, I went to both evening shows, and never got tired of seeing it. When I returned home to California that summer, it was playing at a discount 'second-run' theater there in town, and I went to see it there several more times. All told, I've paid to see Raiders at least 150 times in my life. For me, it's the perfect movie, and Indiana Jones is one of, if not THE, greatest movie hero of all time. He was such a favorite, that I went out of my way to find shirts and pants like he wore in the film. I was too poor to buy a weathered leather jacket like he had. But I did manage to acquire several 'authentic Indiana Jones' brown fedoras over the years, the first of which, a beautifully rendered and pricey chapeau I purchased from the old B. Altman store near the Empire State Building in New York City, tragically blew off my head and into the ocean several miles off of Atlantic City when I was sailing with it one summer. Oh well.

To this day, though, I get a smile on my face every time I hear the famous and instantly recognizable "Raiders March" music. John Williams and the London Symphony Orchestra outdid themselves on the soundtrack to this movie; the music evokes that of classic films and serials from the 1930s and 40s. One of my other long-time favorite bits from the soundtrack is the theme during Indy's visit to the Map Room - just superbly done. I bought this soundtrack on cassette when it came out in 1981 on Columbia Records. Years later, in 1995, DCC Compact Classics rereleased the soundtrack in an expanded version, with songs from the movie not included in the original 1981 release. The expanded version is what is provided here.