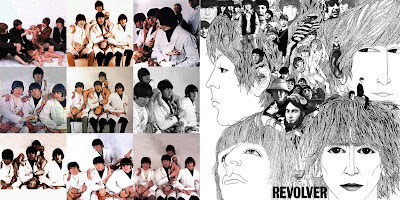 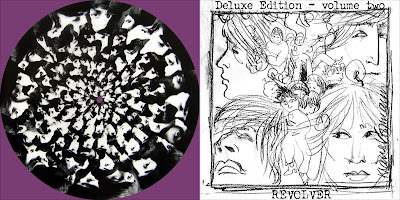 I know that the consensus "Greatest Album of All Time" is Sgt. Pepper's Lonely Heart's Club Band, but my all-time favorite Beatles album is Revolver. 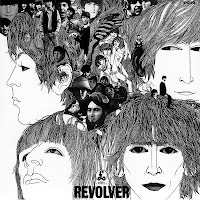 Revolver is where I think the Beatles peaked, in terms of overall songcraft, inventiveness and variety. Indian music, Motown, children's music, rock, pop, chamber music - all enhanced by the most groundbreaking studio techniques seen on an album up to that point (did I mention that this record came out in 1966?) - they did it ALL on Revolver, and everything holds together, as both stand-alone tunes and as a coherent album. I know that it's near-blasphemy to say this, but I feel that Revolver is FAR superior to Sgt. Pepper - and The White Album, for that matter.

I never get tired of hearing the songs on this disc. In fact, one of my favorite memories from my days in Texas is a trip I took with my girlfriend to Austin one weekend. We ended up in a small bar along the main drag there, where a four-piece band of what looked to be high school kids were set up and playing their songs. Suddenly, these youngsters kicked in with an absolutely amazing live version of "Tomorrow Never Knows" - I mean, words cannot describe how good they were, and how stunning their version was. I often wonder what happened to that group, and if they got any farther than that little club in Austin, because they were THAT good.

One weekend afternoon in the spring of 2008, I was browsing the magazine racks at Borders Books in Newark, Delaware, checking out the latest issues of Q and Uncut in the section housing the music rags. I can't recall what made me pick up the latest issue of Rolling Stone - maybe it was the cover photo, or a feature article that caught my eye. It HAD to be something out of the ordinary, because any other time I would have touched that magazine with a ten-foot pole. In my mind, Rolling Stone is the magazine of the music establishment; it's the one you go to if you want reviews on the most recent Springsteen or Third Eye Blind album, or commentary on the latest Dylan reissue. But as for any writing related to what is happening on the cutting edge of music, Rolling Stone is just about the last place on Earth to look for that. I respect their coverage of classic rock (as my own ongoing "Rolling Stone 500" postings here on this blog humbly acknowledge), and their political reporting over the past 40 years has been consistently superb. But in my opinion, Rolling Stone hasn't been interesting since they last published an article by or about the late, legendary Hunter S. Thompson, the magazine's former "National Affairs Desk" correspondent - the guy who more than anyone else put them on the map, journalistically speaking.

ANYWAY, as I was saying - for some reason, I picked up Rolling Stone and started flipping through it. Near the front of the magazine, I came across a small article celebrating the release of what were reported to be high-quality Beatles bootlegs, by something/someone called Purple Chick:


The Beatles' albums came out on CD in 1987, but fans have long complained that the early digital technology used to remaster the recordings left them sounding hollow and thin — and that the official remasters are way overdue. That's where Purple Chick comes in — a secretive fan (or group of fans) who has been quietly remastering classic discs like Revolver and A Hard Day's Night, and releasing the digital files for free online. How is this possible? The Beatles' CDs sound so bad that carefully digitized tracks from pristine vinyl copies are noticeably better — with crisper highs, a fuller soundstage, and more realistic reproduction of instruments and voices. And the Purple Chick editions are superior to the originals in other ways, too: The Sgt. Pepper collection contains the original record in mono and stereo, and four discs worth of studio outtakes; the White Album comes in a whopping twelve-disc version, including alternate takes, studio chatter, demos and fascinating jams.

Although the write-up was short, it included the website address where these bootlegs could be downloaded.

"Holy shit!", I thought as I immediately dropped the magazine back on the rack and literally ran out of the store, fumbling for my car keys as I inwardly cursed the stupid bunch of bastards the Rolling Stone staff apparently were for diming Purple Chick out so blatantly. By publishing in a national magazine the exact Internet location of where to download unauthorized records, I knew that the site was at risk of being immediately shut down by the authorities. For all I knew as I hightailed it home from the bookstore, the site had already been taken offline. All the way back to nearby Elkton, Maryland, I lambasted Rolling Stone in my thoughts for their idiocy, and as I hurried through the door towards my computer, I prayed that Purple Chick was still up and running.

To my relief and good fortune, it was. I sat down, settled in, and began downloading everything I could from their site.

The guy or guys at Purple Chick (no one really knows who or how many people were behind it) have over the years done many remasterings of classic albums. They've done some work on the Beach Boys' back catalogue, some with Tracy Chapman and a lot of Indigo Girls. But their main concentration and specialty was in Beatles remasters. Over the years, they put out amazing multi-disc sets of all of the Beatles major albums. In addition, they gathered rare and obscure Fab Four material (like the original Decca audition tapes, the complete BBC Radio shows, and their annual Christmas fan club records), cleaned those up, and released pristine versions. The work that they did on the Beatles music, unheralded and unrewarded, puts to complete shame the botched job EMI did with their widely publicized recent "remasterings" of the Beatles catalog.

Alas, with all of the great work Purple Chick did with this music, they were forced to go further underground. Sure enough, just as I figured would happen, the authorities came in and clamped down on the site within a week of the RS article appearing. Fortunately, by the time they were shut down, I had gathered up pretty much everything I wanted from them, including their Revolver remaster (I was sorely tempted to get their twelve-disc(!) reworking of The White Album - auditions and studio takes included - but I just didn't have the time or wherewithal (not to worry, though - I got it later!)). On everything I collected, the sound quality was just as superb as had been claimed.

For your information, here's the song lineup for the Purple Chick 3-disc Revolver set:

The Purple Chick remasters are exceedingly hard to find on the Internet now. It's not like they've totally disappeared - this IS the 21st Century, the Information Age, and once something hits the Web, it's all but impossible to make it go away again. But to save you from the time and drudgery of searching, I offer you here my copy of the Purple Chick Revolver remaster, released in 2004 (the files are in .m4a - sorry). Enjoy, and as always, let me know what you think.