The Beatles - I Hope We Passed The Audition (Purple Chick) 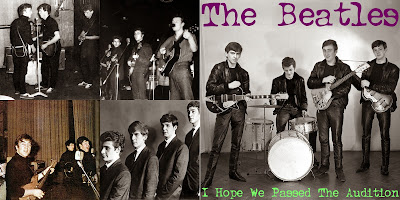 This is going to be a big year for The Beatles, with the fiftieth anniversary of their debut on the American Ed Sullivan Show coming up next month. So brace yourself for a deluge of Beatle-related articles, shows, tributes, magazine covers, interviews, music releases, etc. over the next few weeks, as every Tom, Dick and Harry of a media outlet climbs aboard the nostalgia bandwagon (Never mind the fact that they'll be selling that nostalgia to a vast majority of people who weren't even alive when the British Invasion began that snowy February day so long ago . . .).

And we here at Pee-Pee Soaked Heckhole will be no exception (ha ha!)!

Here's my first Beatle entry of the year - a collection of early Beatles recording sessions from 1961 and 1962, provided by our good friends at Purple Chick. This disc includes the output from the series of Polydor recording sessions conducted in Germany with Tony Sheridan in June 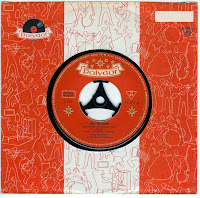 1961, during the band's Hamburg residency, with The Beatles (billed as 'The Beat Brothers') serving as Sheridan's backing group. This was the session that produced the single "My Bonnie", the song that eventually brought the band to the attention of a key figure in their rise to stardom, Brian Epstein.

[Contrary to popular belief, the Sheridan sessions were not the group's first visit to a recording studio. During an earlier trip to Hamburg in October 1960, the band was asked to back Lou Walters (of Rory Storm's Hurricanes, another band in residency there) for a three-song session at Akustik Studios. Pete Best was unavailable that day, so Harrison, Lennon and McCartney sang harmonies and played with the Hurricanes' drummer, Ringo Starr - the first time the four future Beatles ever played together.]

This disc also includes, in its entirety, the famous Decca audition in London on January 1st, 1962, the band's first formal audition for a British record company. This was the tryout that was infamously rejected by Decca a month later, with the comments "Guitar groups are on the way out" and "The Beatles have no future in show business" - still considered one of the biggest mistakes in music history (although in Decca's defense, from most accounts, The Beatles' song selection and nervous, tentative presentation that day did little to showcase the band's talents and versatility . . . in addition, the band the label ended up signing (Brian Poole & The Tremeloes, who auditioned the same day immediately after The Beatles), were locals, and as such would mean lower travel expenses for Decca than the Liverpool-based Fabs).

A superb and detailed examination of the events leading up to and including The Beatles' Decca audition (including a synopsis of the best existing recordings for each song - guess which source was selected?!) can be found here on the Comprehensive Beatles blog. I can add nothing to this excellent writeup.

So I'll leave it at that, and leave you all with this: I Hope We Passed The Audition, released by Beatles bootleg masters Purple Chick in 2006. Enjoy, and as always, let me know what you think.