The Beatles - From Then To You (Purple Chick) 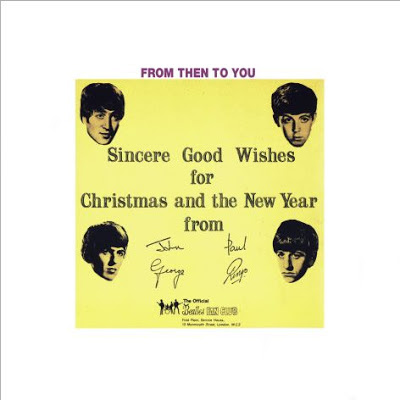 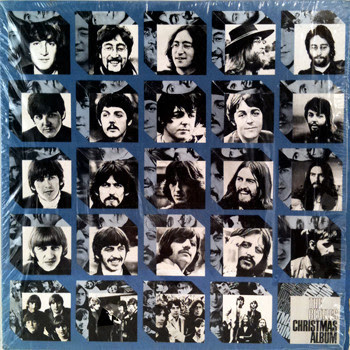 More Christmas-related rarities for you . . .

Between 1963 and 1969, The Beatles sent out annual Christmas songs and messages on flexi-disc (produced by Lyntone, a London firm which wasn't really a label as such, but more of a record pressing plant for hire, specializing in small-run stuff) to members of their official fan clubs in the UK and US. The idea for these Christmas records came from Tony Barrow, the Beatles' press officer. As the volume of fan mail grew exponentially in the wake of the band's meteoric rise, the group fell further and further behind in answering the torrent of cards, letters, and club membership applications. Barrow suggested, as a way to assuage increasingly pissed-off fans, that the Beatles should look to Queen Elizabeth, who sent out annual yuletide greetings to her subjects via TV and radio. In his words, they should "follow her fine example, but in their own way." It was intended to be a one-off method of damage control with fans in 1963, but it became an annual Beatle tradition, a nice bonus for joining their club and a unique way to acknowledge all of their fans. 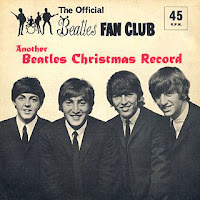 The early Beatles Christmas records (1963, pictured above, and 1964) were casual affairs, seemingly thrown together at the last moment by a group with a lot of other things pending on their schedules. But that isn't to say there wasn't any preparation involved. Barrow wrote the script for these two records, which the band followed more or less. What's great about these early ones is that, in them, fans got an extended glimpse at the 'offstage' Beatles - goofing off, acting silly, laughing and joking, having fun and being totally comfortable and casual with one another. It wouldn't last. 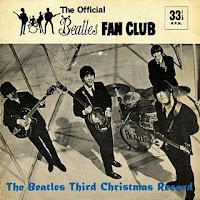 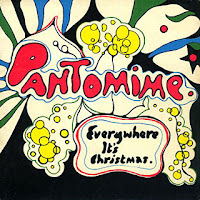 Things began to get a lot more involved beginning with the 1965 Christmas record. The Beatles started to take a more active part in the writing of the record, which featured more extensive skits and song parodies. This trend continued through the next two releases, including the 1966 Pantomime - Everywhere It's Christmas disc. The 1967 flexi-disc was the most elaborate yet, with the group members playing several different characters in sketches revolving around fictional bands auditioning for a BBC radio show. 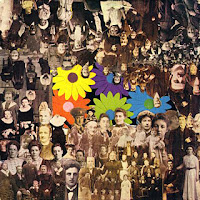 The '67 disc was titled Christmas Time Is Here Again!, and featured an original song of the same name played throughout the record. This song was the only segment of any Beatles Christmas record to receive official release (it was eventually put out in 1995 as the B-side on the "Free As A Bird" 7" single). 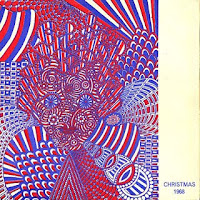 In the 1968 release, you can start to sense a band on the verge of falling apart. The 'group' dynamic was all but long gone - members recorded most of their segments separately. John's contribution that year included a particularly biting 'fable' called "The Ballad of Jock & Yono", obliquely calling out people (including band members) critical of his relationship with Yoko Ono:

"Once upon a time, there were two balloons called Jock and Yono. They were strictly in love, bound to happen in a million years. They were together man. Unfortunate timetable, they seemed to have previous experience which kept calling them one way or another (you know how it is). But they battled on against overwhelming oddities, including some of their beast friends. Being in love, they clung together even more man. But some of the poisonous-monsters-of-outdated-busloadedshitthrowers [said very garbled and quickly, but you get the general idea] did stick slightly, and they occasionally had to resort to the dry cleaners. Luckily, this did not kill them and they weren’t banned from the Olympic Games. They lived hopefully ever after and who could blame them?" 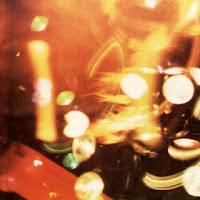 By 1969, it was over. The band had effectively split by the time this Christmas record was recorded, so everyone's segment was recorded separately. There's a LOT of John and Yoko on this one, with scant contributions by George and Ringo. Actually, if you think about it, the progression of the seven Beatle Christmas records from 1963 to 1969 closely follows the history of the band - from the happy, carefree early days of the group, to the increased experimentation of their middle years, to their final estrangement and breakup.

In 1970, in the aftermath of the band's dissolution, the UK fan club collected all seven of the Christmas records and released them on vinyl (for members only) that December on a disc entitled From Then To You. The record was repackaged in the US as The Beatles Christmas Album and released by the American fan club to its members in the spring of 1971. For most US fans, this was the first time any of them had heard the 1965, 1966 or 1967 records - American fans got ripped off in those years. Instead of receiving the flexi-disc, all they received in those years was a crappy postcard with a holiday message from the band.

Outside of these fan club releases and the one song mentioned above, the Beatles Christmas records have never received official general release. There were attempts to produce bootleg releases in the early 1980s, but lawyers representing the band beat those efforts back. After that, nothing widely available containing all of these records existed . . . until the Purple Chick bootlegs appeared in the last decade.

As I mentioned in a previous post, I acquired this in 2008 during my frantic gathering of Purple Chick Beatles-related releases in the wake of Rolling Stone's thoughtless magazine article. Purple Chick's version contained all seven records, along with outtakes, sketch snippets and portions of their early holiday radio shows. Here's the lineup for you:

If you've never heard these before, you're in for a treat. Get ready for another side and dimension of the Beatles you may have never been aware of. For the most part, these are excellent and essential parts of the Beatles oeuvre, and as such I can't for the life of me figure out why they haven't been put out on an official album yet. EVERYONE needs to hear this great stuff.

But, you all are first! So, for your holiday listening pleasure, The Beatles' From Then To You, released by Purple Chick sometime in 2007 (I only have it in .m4a - sorry). Enjoy, and as always, let me know what you think.

My friend, the writer and frequent NPR guest Colin Fleming, has done a few things over the recent holidays related to this post - here they are for your edification and enjoyment. Great job and good stuff as always, Colin!