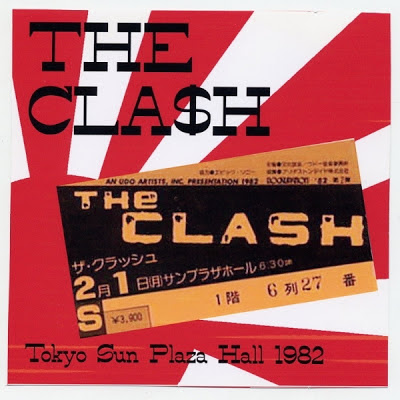 Here's the two-disc version of The Clash burning down the Nakano Sun Plaza in Tokyo as part of their Far East tour in early 1982, playing some pre-release versions of songs that would eventually appear on Combat Rock three months later. In terms of quality, this set is hit and miss . . . But even in its muddied glory, you can still hear the power and musicianship of the band shining through. You can even sense some remaining rapport between the band members here - probably the last of it, as the band was touring in the midst of the contentious recording of that album. Mick Jones was unhappy with the rest of the band rejecting his Rat Patrol From Fort Bragg mix, and Glyn Johns was about to be brought in at the end of the tour to remix the album in London. Jones was especially pissed at Joe Strummer; their acrimony would lead to Jones leaving the group less than eighteen months later . . .

(but I've already covered the story behind Combat Rock, haven't I?)

Anyway, what I'm saying is, despite the iffy quality in places, it's still an essential listen for Clash fans with a hankering to know what the band sounded like live. So, here you are. Enjoy, and as always, let me know what you think.

Whoa - lookie here at what I found; some enterprising young raascal has taken the liberty of uploading a major portion of the Nakano Sun concert onto YouTube. Enjoy!