Poll results: ". . . And along those same lines, there are some old movies that are crying out for a remake. Which one would you most want to see remade?" 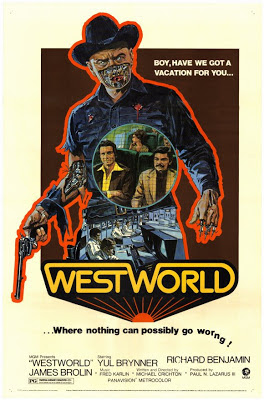 Well, this was no contest:

And I couldn't agree more - Westworld (1973) is a movie all but begging for a well-deserved remake. I find it simply stunning that no one in Hollywood has apparently even thought about redoing this film at any time over the past forty years. With today's filmmaking technology, camera techniques and marketing savvy, a modernized Westworld would be a guaranteed moneymaker for any studio that released it.

Despite the passing of time, the hokey special effects and the (mostly) less-than-inspired casting (I mean, c'mon - weedy Richard Benjamin and the future Mr. Barbra Streisand as the 'heroes'? (although oddly, the casting ends up being strangely effective)), the original movie still holds up remarkably well today, and remains thoroughly watchable and entertaining. Yul Brynner's android Gunslinger role is considered in some circles to be just as iconic as the actor's longtime leading role on stage and screen as the King in The King And I. He's an absolute badass in Westworld, an emotionless, unstoppable killing machine; the character is an obvious inspiration for Schwarzenegger's Terminator character a decade later (so much so that it borders on outright plagiarism, in my opinion. But I digress . . .).

The other top three films on the list following Westworld are also movies I would like to see remade. Dune (1984) was doomed from the very start - plans to film Frank Herbert's novel had been kicked around Hollywood in various stages of 'development hell' for nearly 15 years beforehand; the producer (Dino De Laurentiis) was finally all but forced to make the movie just as the production rights were set to expire. De Laurentiis hired a near-novice director (David Lynch, coming off his first big-budget movie, The Elephant Man) to helm the project. Even then, Lynch had the innate sense of scope and quirky artistic vision to make Herbert's world a reality, but the producer didn't give him the opportunity or freedom to bring that off-kilter vision properly to the screen. The result was an incomprehensible, over-produced, big-budget. widely-panned monstrosity that flopped hard at the box office. With the right producer, writer and director, and given ample time to flesh out a coherent narrative and plausible alternate 'world', a reimagined Dune could be a blockbuster.
Fantastic Voyage (1966) is a movie that, like Westworld, would benefit greatly from incorporating modern, improved special effects into it (though I doubt that anything around today can surpass the unique 'special effects' that co-star Raquel Welch brought to that film!).

As for The Running Man (1987), Schwarzenegger's version is an enjoyable live-action cartoon, with Richard Dawson's perfectly played villian Damon Killian stealing the movie right out from under Arnold. But the "Running Man" novel, written by Stephen King, is WAY darker and more thought-provoking than the muscle-bound action flick that ended up on screen. I think that a remake would surpass the original by utilizing this more-serious tone. Hell, it can't hurt - they tried it for last year's Total Recall remake; might as well give it a shot here too. 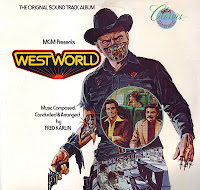 But that's just my two cents. I'd appreciate hearing any comments you all might have on this subject. Thanks again for voting, and I'll try to think of a new poll question soon. In the meantime, here's Westworld (Original Motion Picture Soundtrack), composed and arranged by Fred Karlin and released by MGM in 1973. Enjoy, and let me know what you think.