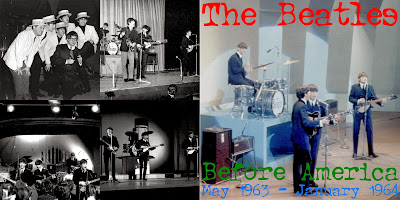 Earlier this year, I posted The Beatles' eleven-disc Complete BBC Sessions (released by bootleg label Purple Chick back in 2004).  A couple of months afterwards, a writer named Colin Fleming penned a superb article about the band's BBC radio shows for the Atlantic Monthly magazine (I added a link to this piece in the original posting; here it is again).  Shortly after it was published, I began receiving exponentially more requests for my Purple Chick BBC posting; as it turned out, my site was apparently one of the very few places, if not the ONLY place, on the Internet to find the complete set.  I made a point of thanking Mr. Fleming here in writing for indirectly bringing the power and glory (ha ha) of Pee-Pee Soaked Heckhole to the attention of literally thousands more people.

A couple of weeks ago, I had the opportunity to actually meet him; he recently published a couple of books (Dark March and Between Cloud and Horizon), and had a reading/book signing up in Boston that I attended.  I made sure to introduce myself; he brightened considerably when I told him who I was and what I was there representing!  We spoke for a few minutes about some of his recent in-progress projects, which included expanding his Atlantic Monthly article into a full Beatles book, slated for publication sometime in mid-2014.

Well, it appears that he had too much of the Fabs on the brain to hold out until next year; a new Fleming-authored Beatles article appeared in the Atlantic Monthly this morning.  This new piece commemorates the 50th anniversary (to the day) of what he calls "The greatest Beatles performance of all time", a seven-song concert played before a miniscule audience for broadcast on a Swedish radio show, "Pop '63".  Fleming focuses on the energy and rawness inherent in this music - back in the pre-Sullivan time before The Beatles became megastars, when they could actually throw themselves with abandon into a live show and hear themselves during their concerts - in making his case for the greatness of the particular performance.

The piece includes links to YouTube recordings of all seven songs - and yes, there is rawness and power aplenty in this gig.  I don't have any considered opinion regarding whether or not this was The Beatles' 'best ever' live gig . . . but I'll defer to the experts (i.e., Mr. Fleming) on that point.  I will say that, all in all, the entire Swedish set is pretty good.

I realized, as I was listening to these YouTube clips, that I already owned this entire concert on .mp3; it's part of Purple Chick's two-disc Before America set.  About five years ago, Purple Chick released a series of sets - about a dozen in all - cataloging and collecting almost all of existing Beatles' live show recordings, from their earliest days in Hamburg (Star Club) to their U.S. breakthrough (Conquering America), and on through their various concert tours up to their last official show in 1966 in San Francisco (The Last Tour).  Generally speaking, the musicianship and sound quality on these live sets gets progressively worse after early 1964.  After their initial flush with international success, the band quickly bored of touring, and were fed up and frustrated with the shrieking fans drowning out the sound of their meticulously-crafted songs.  Frankly, they stopped giving a shit - and you can hear it.

In that regard, Fleming may have a point; the best live Beatles recordings are generally from the pre-first U.S. visit period, with the sweet spot being the late fall/early winter of 1963/64 - the specific period covered in Before America.  The first disc of this set contains the "Pop '63" show (tracks 11-18), along with another less heralded but equally excellent Beatles Swedish appearance less than a week later, on the Stockholm TV show "Drop In".  The disc also contains the band's entire Royal Variety Performance set (where John famously instructed the audience to rattle their jewelry instead of clapping) and their hilarious appearance on the Morecambe & Wise Show, where the Fabs more than hold their own with England's top TV comics of that period (I can't resist posting some video of a portion of this show - still funny today):

The second disc contains. among other gems, portions of The Beatles' January 1964 afternoon/evening stand at L'Olympia Theatre in Paris, France, their last major overseas gig before their arrival in America less than a month later. Pretty much everything on this set is outstanding - I'll leave it to you to decide if it's the all-time Beatles best.

Here, for you listening pleasure, is The Beatles' Before America, a two-disc collection released by Purple Chick in 2008.  Enjoy, and as always, please let me know what you think.