The Clash - Clash On Broadway (The Outtakes) 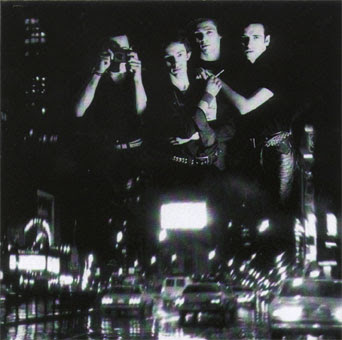 From Sharoma's superb site, reviewing a multitude of Clash bootlegs and rarities, comes the following quote taken from his excellent write-up regarding the super-hard-to-find (except here, of course!) Demos, Outtakes, Alternates (D.O.A.) set:


"Along with Clash On Broadway Outtakes and The Rat Patrol, [you'll] almost have all The Clash demos, outtakes and alternates."

Since the other two mentioned above have long been available on this blog, I figured I might as well post the third and final selection in the band's bootleg triumvirate!

Despite this disc's professionally-produced liner notes and cover, which are identical to the 1991 three-disc Clash on Broadway Legacy Records release, this release is NOT an official part of that set. The original compilation (which included early singles, some live recordings, and a couple of previously unreleased tracks and demos) covered the period from the band's 1977 debut through to 1982's Combat Rock. It notably 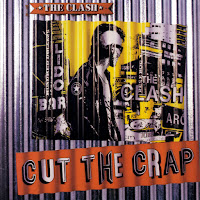 included nothing from the critically and commercially reviled 1985 album Cut The Crap, about which I've had more than enough to say about in the past. The Outtakes (or Clash On Broadway (Disc 4), if you will), is an attempt to fill in that missing piece, and also provide fans with additional rarities and demos left off of the box set (which, in my opinion, had a pretty scanty selection).

Sharoma's site only details the last ten tracks for this boot (I stand by his reviews of these songs); I got the extended version from somewhere - I can't quite recall where or when, it's been so long. Here's the back cover with song details: 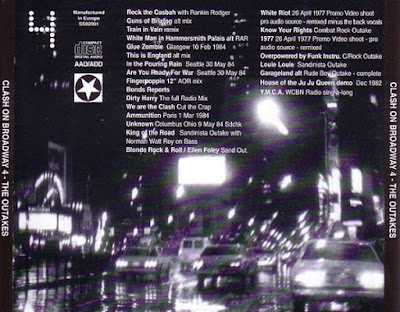 Highlights from the first half include some live concert takes by the post-Mick Jones Clash in Seattle, Glasgow and Paris (as much as I've badmouthed this lineup over the years, I must say that overall, they didn't sound that bad in concert); radio news reports of the chaos surrounding the Clash's legendary 1981 stand at Bond's International Casino in New York; a full-length version of "Dirty Harry", the early working title for Sandinista's "The Magnificent Seven" (a shorter version of this song is contained on my previous Clash post, Rocker Station); and in my opinion the only decent song off of Cut The Crap, "We Are The Clash". There are a couple of things here that have appeared elsewhere: "Rock The Casbah (with Ranking Roger)" was included on Rat Patrol From Fort Bragg, and "Guns Of Brixton (alt. mix)" was taken off of the Return To Brixton EP. But overall, the selections here are truly hard to find and well thought out.

So, for my first post of the new year, here's Clash On Broadway (The Outtakes), complied in 2002 by an European bootleg label called Scotty Snail. Enjoy, Happy New Year, and as always, let me know what you think.