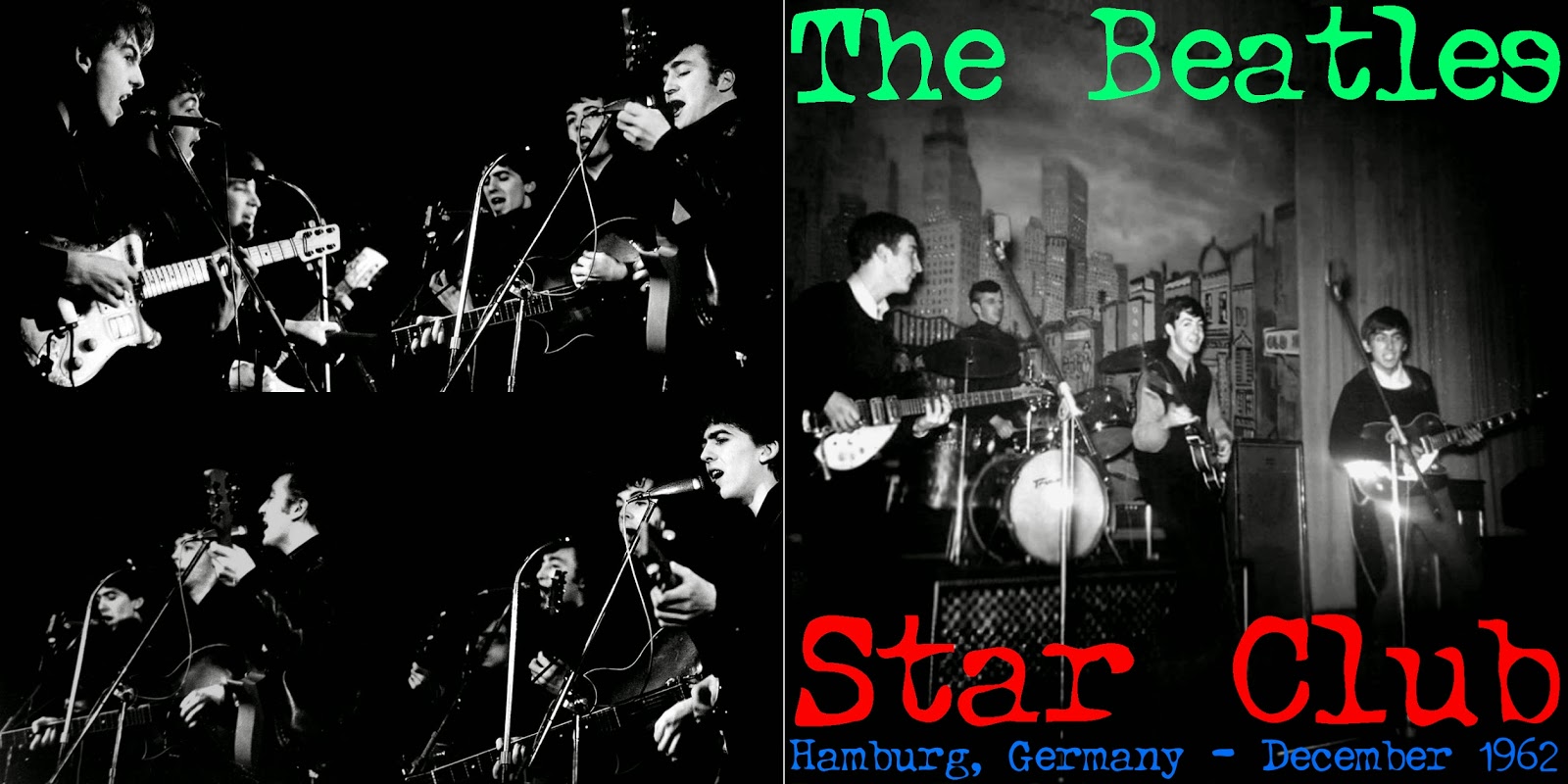 More Purple Chick Beatles stuff, in the lead-up to the fiftieth anniversary next month of the beginning of the British Invasion. I was debating with myself whether to post either this one or the Strong Before Our Birth set, and decided in the end to go with this one. Neither of the two has the greatest sound quality, but I think that in terms of familiar songs and better performances, Star Club is superior.

The Beatles' final two Hamburg residencies occurred in the late fall and early winter of 1962, their first with new drummer Ringo Starr (who had replaced Pete Best that August). The group wasn't thrilled about going back to Germany for these gigs, especially the last one in late December - by then, their star and popularity was one the rise in Britain. Their first UK single, "Love Me Do", had been released that fall and was climbing the charts, eventually reaching #17. Basically, they felt that they had outgrown Hamburg. However, the gigs had been booked months in advance, and as such they were obligated to return.

Ted "Kingsize" Taylor, leader of Kingsize Taylor & The Dominoes (pictured), another British band in residency at the time in Hamburg, was the original source for these recordings. After claiming that he received the Beatles' (specifically John Lennon's) permission (allegedly in exchange for buying beer for the band during their performances), Taylor arranged for the Star Club's stage manager, Adrian Barber, to record the performances on an old reel-to-reel recorder he rented, with all of the songs fed into the machine through a single mike set up in front of the stage. These recording sessions took place during several periods between Christmas and New Year's Eve, 1962 - no one is quite certain how many individual gigs made it onto the tape.

Barber captured 33 separate tracks played by The Beatles during these sessions (some more than once), along with five additional tracks played by the group's supporting bands, the aforementioned Kingsize Taylor & The Dominoes and Cliff Bennett & The Rebel Rousers. All but two of the Beatles songs ("Ask Me Why" and "I Saw Her Standing There") were covers. As befitting a single-mike, reel-to-reel live recording, the sound quality of Star Time isn't of the highest fidelity; at times, it's difficult to make out the vocals, or even to identify exactly which band member is singing. But the performances themselves are rollicking, raw and loose, quite possibly the last time The Beatles played with this sort of abandon. As such, this set is a good counterpoint to some of the later Beatles live recordings (such as the Before America set I posted here earlier), to see how much they matured musically in their early career.

Kingsize Taylor held on to these tapes after The Beatles made it big, and in the mid-60s he tried to sell them to Beatles manager Brian Epstein, but due to their relatively poor quality Epstein wasn't interested. Taylor then forgot about them until the early '70s, when he made a go at prepping these songs for eventual release. As the story goes, he gave the tapes to a recording engineer, who did nothing with them and who later abandoned his office, leaving a lot of his items behind - including the reels, which Taylor and his friends rescued from a trash pile.

Taylor finally found a purchaser for the tapes, and after an unsuccessful attempt by The Beatles to block it, the first commercial release of these sessions was put out by Lingasong Records in 1977. Over the next two decades, various versions of the Star Club tapes, edited and unedited, licensed and bootleg, and with varying track sequencing, were released by several sources. When Sony Music released their version in 1991, The Beatles began taking legal action again. The case was finally decided in the band's favor in 1998, with the judge determining that Taylor's story about Lennon granting him permission to record them back in 1962 was complete hogwash; to quote George Harrison, "One drunken person recording another bunch of drunks does not constitute a business deal." The Beatles were granted exclusive rights and ownership of the tapes . . .

Disc 1 (all songs by The Beatles unless otherwise noted):

Disc 2 (all songs by The Beatles unless otherwise noted):

Enjoy The Beatles' Star Club, all tracks edited and cleaned up to the highest possible quality by the good folks at Purple Chick and released in 2008. The sound isn't perfect, but these sounds should be appreciated more for their historical importance than for their fidelity. Whichever way you decide to approach these discs, have a listen, and as always let me know what you think.