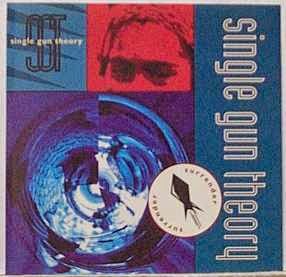 One of the many "one-shot" purchases I've made over the years, when I would purchase a band's entire album or EP just for the one song that I liked or thought was cool (I'm very glad those days are gone - thank God for iTunes).

I bought this disc in Washington, DC (good ol' GWU Tower Records) in the winter of 1992, solely on the strength of "From A Million Miles", a song that was then getting serious play on DC's alternative station WHFS. I had scant interest in "Surrender", the song for which the disc is titled - to my ears, that tune was nothing more than the standard shimmering ethereal gossamer electro-pop being put out ad nauseum back in the early '90s. But I thought "From A Million Miles" was amazing then . . . and still think so today.

Australia's Single Gun Theory recorded for nearly fifteen years, releasing four albums (including a movie score soundtrack) and more than half a dozen singles and EPs during their existence. But since their demise in 2000, any mention of or information about the band is exceedingly difficult to come by. All of their music has long been out of print, and their old recording label carries no reference to them on their website. It's a shame, really - perhaps what Single Gun Theory put out wasn't exactly timeless and universal, but the band made an effort to produce some appealing music to leave to the world, and at the very least that should be acknowledged. A lot of their sounds, as I said above, might have been boring and synthpoppy to me and a lot of others. But to paraphrase Anton Ego: "The average piece of junk is probably more meaningful than our criticism designating it so."

Therefore I leave to you all what is, in my mind, one of the band's finest moments - Single Gun Theory's Surrender EP, released by Canada's Nettwerk Records on January 28th, 1992, featuring one of my favorite songs from back then, "From A Million Miles":

I've been dragging my ass on postings over the past couple of weeks, if you haven't noticed. I will probably be backdating a couple for this month in the coming days. Until then, I hope this one tides you all over for a bit. Enjoy, and as always, let me know what you think.