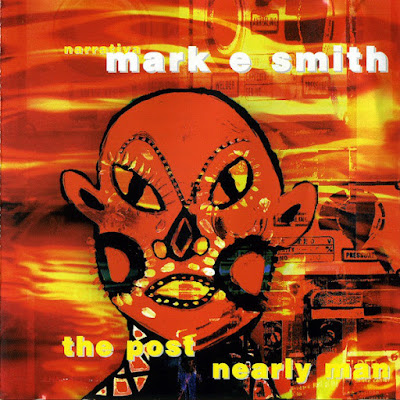 In the day since Mark E. Smith's passing, there have been tributes and commentaries galore about the nature of the man and his music. In addition to the Guardian's notice I posted yesterday, here's but a small sampling of what's been published in the past 24 hours:

I don't feel that I'm up to the task of matching this worldwide outpouring of eloquence in regards to the life and work of this man.  Nor do I feel the necessity to reiterate how much Mark and his band have meant to me over the years; I've covered that topic seemingly countless times in this blog. Smith and The Fall have been a reliable constant in my life for decades, and I looked forward to each new offering that appeared like clockwork year after year; no matter if the band's latest disc was brilliant or banal - it was The Fall, and that was enough for me. It is odd to contemplate the fact that there will no longer be any new music arriving from that quarter; Smith's voice has been stilled, and his brilliant, strange, obtuse and thought-provoking wordplay will no longer grace my eyes and ears. His death leaves a giant hole in my musical life, one that I can't foresee will ever be adequately filled again.

Enough of my overwrought prattle about a singer and band that the vast majority of people in the world were profoundly unfamiliar with, uninterested in and/or indifferent to. Mark E. Smith and The Fall's music was definitely an acquired taste; I'm just glad I was admitted to the banquet... and brave/open-minded enough to sample and appreciate the wares being offered. If you're a fellow Fall fan, you know exactly what I mean.

I think that, instead of words, the greatest tribute I can render unto the man on this blog is to provide to you all over the next few days with access to some of my favorite, most obscure works of his (either with The Fall, individually or with other artists) from my collection of Fall-orabilia. I'll start with his first solo spoken word release, The Post Nearly Man, released on Artful Records in August 1998.

Enjoy, remember, and as always, let me know what you think.