The Fall - The Frenz Experiment 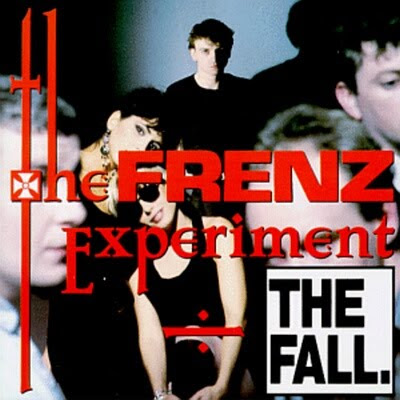 I arrived in Norfolk, Virginia late one rainy Sunday night in April 1988. I was a year out of Annapolis and had just finished additional training at a school in Athens, GA (great music town, by the way); that night was the tail end of a short vacation I took between the end of classes and the beginning of my life in the 'real' Navy. The next morning, I was scheduled to report to my new duty station, where I was slated to spend the next three years, at least half of that at sea.

So, you can probably guess that I wasn't really clicking my heels together at the prospect of arriving on board that ship the next day. Not that I wasn't looking forward to the job, and the adventures I was sure to have sailing to strange and exotic places. It was just the in-your-face feeling of transition, of "this is where your life really begins" that caused me more than a little bit of trepidation. Up to that point, the Navy had been pretty fun. Annapolis was regimented and all, but it was still a school, and we all had fun there. Athens was the same way, even more so. We were out of the Academy and on our own, collecting a real paycheck and free to spend our time and money on booze, girls, music and other pursuits when we were away from the base. But being on board a ship, actually doing what you had trained to do and were looking forward to doing - well, that was a whole different thing. I was anticipatory, but nervous.

I found a cheap, ramshackle "Bates"-type strip motel near the Virginia Beach Boulevard/Military Highway cloverleaf (it's now long gone), coincidentally close to Crown Point Apartments, the first place I remember living as a kid. The place was a shithole, but the sign out front advertised "FREE HBO AND MTV", which was cool with me. I figured I wasn't going to get that much sleep anyway.

I settled in for the night and flicked the tube on. HBO was a ghost town, so I turned to MTV. Now, I don't know if you remember, but for years MTV had a show called "120 Minutes". It was practically the only place on TV where you could see great videos by bands that were outside of the mainstream, groups that MTV normally wouldn't touch with a 10-foot pole, due to their 'lack of marketability'. Back then, I tuned into that show religiously, eager to see what was on the cutting edge of music. Mind you, 1988 was an interesting time for tunes. The Smiths had just imploded; the Pixies wave was just beginning to rise; the Cure was still huge; Siouxsie & The Banshees were still putting out good songs; and R.E.M. and U2 still meant something. There was a lot happening, which meant that "120 Minutes" was consistently good.

I tuned in just as the show began playing Siouxsie's video for her cover of Iggy Pop's "The Passenger", a song I really liked at the time. I lay there under the covers, bopping to that and singing along all the way through to the end. That video ended, and the next video was one of the strangest I'd ever seen.

It began with a man and woman running down a flight of stairs, accompanied by a thumping drum beat and nagging guitar riff. As they got to the end of the stairs, the drums rolled us into the song itself. The guy singing was obviously English, and not a handsome bloke at that. And it seemed to me that he could barely carry a tune. He slurred and mumbled his way through the song, which had something to do with English colonialism, I think. I couldn't catch much of what he was saying, due to his accent and delivery, but I did understand the chorus - "Vic-toooooooor-ia! Vic-toooooooor-ia! Victoria - Victoria".

The production qualities of the video sucked, and the song seemed very brief. But the music playing behind this daft, elfin little British troll and his crap film was superb, and the whole thing was so off the wall, so off-kilter, that it immediately grabbed my interest and would not let go.

The end of the song came, and MTV showed the song details in type at the bottom left of the screen: "Victoria - The Fall - The Frenz Experiment".

That song stayed with me in my sleep, and all through that first week on board the ship, getting oriented to my new job and surroundings. At the end of the week, I drove over to the mall and found a cassette copy of The Frenz Experiment that had "Victoria" on it. I proceeded to carry that tape with me everywhere - listening to it in the car, at home, or on my Walkman. A month after I arrived, the ship set out on a six-month deployment to Northern Europe. That album came along with me, and I played it to death.

Thus was my first encounter, the beginning of my lifelong fascination with The Fall, my all-time favorite band. That one song has led me to hole-in-the-wall record shops in Manchester, Miami and Monterey, searching for obscure Fall 12" EPs; to subscriptions to snobby, literate British music magazines, searching for scraps of information about Mark E. Smith, the "tone-deaf troll" who I think is one of the few musical geniuses alive; and to hot, sweaty, smoky clubs in New York, Austin and London, fighting for a spot in the front row so I could stand right in front of my favorite band and take every note in.

It's funny how one moment changes your whole perspective like that (true, a musical perspective, which may seem minor, but you know what I mean). As far as I know, that was the only time MTV ever played that video; I never saw a Fall video on that station again. So was it luck or fate that I would be watching that particular station at that particular time? Well, I don't believe in either . . . so we'll just call it a coincidence that worked out for the better.

Here you go - the one that started it all (for me):