Fortran 5 - Heart On The Line EP 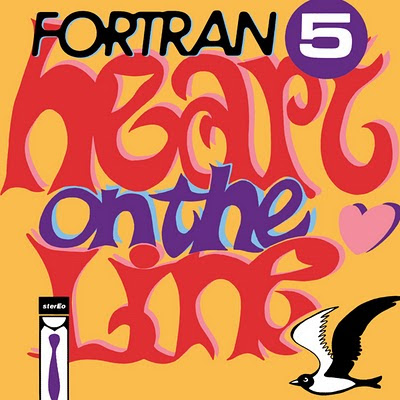 Lordy . . . sometimes I look back through my music collection and shake my head. I was into some very odd stuff way back when.

Here's one I picked up during the late summer of 1991: Fortran 5's Heart On The Line EP, consisting of four remixes of said song. I took a two-week vacation in the spring of that year, and flew over to Madrid, Spain on one of those cheap student tickets (the kind where you can only take what you can put in the overhead compartment or under your seat, as the company who sold you the ticket has the rights to your cargo space) to visit my youngest sister. My sis had graduated from college in Virginia the summer before, and had headed overseas to bicycle around Europe for a couple of weeks before planning to head back to the U.S. to start work. Well, that two weeks in Europe turned into a year and a half, and she ended up in Madrid after finding a job teaching English to Spaniards there. Mind you, at the time, she couldn't speak Word One (or is that "Una Palabra"?) of Spanish . . . but by the time I got over there to see her six months later, she spoke the local language like a native. I guess that shows you what total immersion in a country can do for you.

Anyway, I showed up, and we had a high old time. I was relatively flush with cash at the time, while she was living on her meager wages in a semi-hovel in downtown Madrid with her roommates, two Irish sisters who were constantly at one another's throats. So I tried to get her out to see and do things she hadn't had the opportunity to partake in before, due to her penury, stuff that I took for granted - like going out for pizza and hitting some of the local clubs. This was in addition to the touristy stuff I wanted to see, like the Prado Museum.

It was at one of those city clubs where I first heard "Heart On The Line". That dark, thumping electro-techno tune was perfect for the place where we were, and it tickled my ears enough to have me take note of it for when I went back to the States. Yes, as I've mentioned before, I used to like the whole dance/house thing - so shoot me; I was young and having fun!

When I got back the the States, I found the EP, released by Elektra Entertainment earlier that year, at the old Tower Records near George Washington University in DC. Fortran 5, formed in London in 1989, was basically two guys, David Barker and Simon Leonard, assisted by a bevy of guest artists. They cranked out several singles and albums worth of sample-heavy techno during the early 1990s, with the assistance of members from bands such as Can, Orb, and Sly & The Family Stone. Vocals on the Heart On The Line EP ware provided by members of Miranda Sex Garden.


After their final release as Fortran 5 in 1995, the band added Jane Brereton and morphed into Komputer, which began as a veritable Kraftwerk tribute band before modifying their sound in the late '00s more into electronic sample manipulation. As far as I know, they're still at it.

So here - harken back to the early '90s, and relive those old techno club days with me! Enjoy: